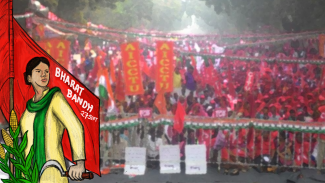 (An all-India convention of mass organizations was held on the call of Samyukt Kisan Morcha (Joint Platform of Farmers), spearheading the farmers’ movement for last 9 months, at Singhu Border of Delhi on 26 and 27 August, 2021. The convention was attended by representatives of organizations of farmers, workers including agriculture workers, women, youth, students, rural poor and tribals. 26th August 2021 marked the completion of 9 months of historic farmers’ movement)

This Convention, having discussed and considered (1) the impact of the 3 pro Corporate farm laws, the New Electricity Bill 2021 and the Commission of AQM in NCR and Neighbouring Areas Act and the Govt.’s failure to address the legal rights for procurement of all agriculture produce at an MSP as per Swaminathan Commission; and (2) the sustained, intense and rising anger of farmers, agriculture workers and other sections of working people,

“has unanimously resolved to intensify its agitation all over the country and to call for and rally all farmers and working people for a one day Bharat Bandh on 25th of September, 2021”.

This Convention calls upon all farmers and supporting organizations to put in full efforts to make Sanyukt Kisan Morcha rally at Muzaffarnagar on Sept 5 an unprecedented success and to take Mission UP/ Uttarakhand to the grass roots in all villages.

This Convention also calls upon all farmers to start the process of forming Sanyukt Kisan Morchas in all states and districts and along with supporting organizations    to intensify the movement all over the country by holding state and district level conventions, rallies, enforce no toll extractions by toll plazas and to protest against leaders, MPs, MLAs of BJP and its NDA allies, for refusing to accept the patriotic demands of the farmers of India.

This house understands that the Contract Farming Act will enable the Govt. of India to compel Indian farmers to sign unfair and unequal contracts with big Corporate and MNCs to only grow crops which are of commercial value to the companies; deprive farmers of their freedom to grow food crops; force them to buy costly inputs and mechanized farm services sold by the contracting companies; force farmers to engage in separate agreements with debt institutions for money to pay for inputs by mortgaging land and other assets; make them suffer losses as actual prices paid will be determined after assay of crops; will establish a series of middlemen as per terms in the contract to supervise fulfilment of contract conditions; and will shift cropping pattern in entire districts or its parts as per allotment to Companies.

This house also understands that the Mandi (market) Bypass law will allow private food corporations to get powerful middlemen, Agriculture Cooperative societies, Farmer Producer Organizations to establish electronic trading platforms and offer the lowest prevailing on line rates; it will deny any purchase at the MSP declared by the Govt.; that these Corporations will be free to procure and hoard food crops; that the Govt. will promote these ‘alternate’ channels of trade, meaning thereby that it will not support the Govt. mandis and procurement at MSP rates; that these private mandis will charge their own levies as well as decide the rules and guidelines of fair trade; that it is these rules which will form the basis of settling all legal disputes; that through control of mandis and trade the Corporations will set the benchmark for high rates of inputs and services and low rates for crops; that they will control entire food chain from crop purchase, storage, transport, processing and marketing of packed and processed foods.

This house is shocked to note that the ECAA removes food from list of essential items; gives freedom to raise price of cereals, pulses and oilseeds by 1.5 times each year and of vegetables and fruits to 2 times; with no Govt. procurement, supply of food grains in PDS will stop, which as per WTO conditions has already been on the cards; it will allow unlimited stocking and black marketing of food by Multinational and Indian Food Corporations.

The house discussed the new Electricity bill which withdraws subsidized energy supply for agriculture and rural households; threatens to more than double the electricity rates and will allow charging of commercial rates for household businesses.

The house rejected the prosecution of farmers, imposing heavy fines and imprisoning them under the Commission of AQ law for NCR and Adjacent Areas, in the name of causing pollution even though stubble burning has a miniscule role if any in NCR’s Air Quality.

The house considered the issue of legal guarantee of purchase of all agriculture produce at MSP of C2+50% for all produce and understood that to ensure this the Govt. should bring down prices of inputs and services, correctly evaluate the cost of production with inputs from the farmers, declare MSP of C2+50% for all agriculture produce, regulate its Export-Import and other policies to ensure that farmers get this price and provide for procurement of all crops that sell below the declared price.

The house noted that though the farmers of India have built a massive, democratic and peaceful movement to make the Govt. see reason, but in its blind commitment to serve the interests of Corporate profits the Govt. has stubbornly refused to see logic.

That all proposals of the Govt. to make changes in these laws provide no answer or relief to the farmers’ apprehension of Corporate takeover of agriculture production, processes and markets; to their suffering loss of their land and livelihood; and to the damage which will be caused to the country’s Environment, Ecology and Biodiversity.

That farmers have been extremely peaceful in protests despite serious provocations caused by the RSS-BJP, and the Govt. is making baseless and false charges and is falsely implicating patriotic farmers under draconian laws.

That this historic movement has united people across religions, castes and regions and has inspired huge participation by all oppressed sections of people against their exploitation by big corporations; and that it has inspired confidence of the people of India to remain united and steadfast in struggle against fascist onslaught of this pro Corporate Govt.

Drawing all these lessons, this Convention calls upon the people to India to come forward and make Muzzafarnagar rally of Sept. 5 a success as well as organize a massive All India Bandh on the 27th of September, 2021, the anniversary of the first Bharat Bandh of this movement and the date on which the protest completes 10 months of peaceful sit-in at Delhi borders.

This Convention of farmers has noted with regret that pursuant to its pro Corporate, pro MNC policies the Govt. of India has in this period launched several attacks on other working sections of Indian society. It has enacted the 4 labour codes which undermine rights of industrial workers; it has driven severe increase in prices of petrol, diesel, cooking gas and fertilizers amongst others; and it is moving to withdraw PDS rations and convert it to cash transfer scheme. We support all struggles of the people on these issues.

The Convention has noted with regret that the Govt. of India has been forcing displacement of tribals to hand over forest and mineral wealth for Corporate loot and has failed to implement the Forest Rights Act 2006; it has failed to implement MNREGA as per law and it pays much below the minimum wages; and it is continuing with forced Acquisition, failed to implement LARR 2013 and has withdrawn from granting land rights to the rural poor. We support all struggles of the people on these issues.

This Convention has noted with regret that the Govt. of India is encouraging Corporate take-over of all small business by various measures; it has allowed increased attacks on Women, their democratic rights and freedom and has been encouraging regressive Manuvadi forces in society; and it has been withdrawing from its social responsibilities towards the underprivileged and has been encouraging privatization of health and education, distancing it from the reach of the poor. We support all struggles of the people on these issues.

The Convention unanimously condemns RSS-BJP’s communal game plan to attack minorities and create a communal strife in order to remain in power. Having miserably failed to solve problems of the people and having dedicatedly indulged in serving Corporate interests, it is making desperate efforts to vitiate communal harmony and democratic fabric of the country. This communal polarization by RSS- BJP is a serious violation of the Preamble of our Constitution which is secular and democratic. This Convention pledges to unitedly fight the communal design of these anti people, communal forces.

This Convention strongly condemns and opposes the attempt of the RSS-BJP Govt. at the centre to privatize several public sector and Govt. assets to the Corporate and MNCs. These include Railways, Power Sector, Natural gas resources, Telecom projects, Food storage, Insurance, Banks and other valuable assets. These are the property of the people of India and have been built with their efforts and their money. This will lead to massive rise in unemployment. RSS-BJP is continuing on its path of service to the Corporate and MNCs while attacking the people. This Convention pledges itself to supporting all struggles against this Corporatization of India’s natural resources and public sector wealth. π