Scathing Indictment of Central and State Governments: 25th Report of the Standing Committee on Labour 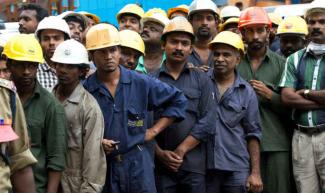 The devastation of the working class has been fast-forwarded during the Covid pandemic. Record level unemployment and a failing economy prior to the pandemic were further accentuated by the authoritarian imposition of the ill-thought lockdown, with the ILO reporting that about 400 million workers in the informal economy were at risk of falling deeper into poverty. The intervening period between the first and second coronavirus waves saw a continuing sharp drop in the labour participation rate. The Centre for Monitoring Indian Economy (CMIE) has concluded that while the lockdowns could have denied people from seeking employment thus causing a fall in labour participation, the major concern was the existence of an economy that simply could not provide employment to large numbers who sought work. CMIE predicted that job prospects looked bleak in 2021-22, and suggested the government to provide support to absorb some of the stress on livelihoods. Its report titled ‘State of Working India 2021’ has documented the dire state of workers in India, and concluded that 230 million additional individuals slipped below the poverty line, defined by the national floor minimum wage (Rs. 375/- a day). This report concluded that the pandemic has further increased informality and poverty, especially for women and younger workers.

Through this time, besides communalising the pandemic in furtherance of its core Hindutva agenda, the Union government’s response has been to whittle away workers’ rights. Instead of addressing the economic and public health crisis, the Union government used this pandemic as an opportunity to bulldoze through the Labour Codes in the parliament. This approach is appositely characterized by what Noami Klein calls the ‘shock doctrine’, which is a ‘brutal tactic of systematically using the public’s disorientation following a collective shock – wars, coups, terrorist attacks, market crashes or natural disasters – to push through brutal pro-corporate measures. The new Labour Codes in one fell swoop attempt to take Indian labour back to the unregulated laissez-faire days of 19th-century European capitalism. These new legislations need to be contextualised within a larger assault on the working class which has been mounted ever since the onset of neo-liberalism. Ever since the New Economic Policy initiated in 1991, the rights of the working class have been under assault on three fronts. The first strategy par excellence, which has defined labour law, ever since its inception, has been the startling discordance between the law on the books and the law in action. Then there has been the gradual whittling away of labour protections through judicial interpretation. The locus classicus (among many others) in this hall of constitutional shame is the judgment in the SAIL and Umadevi cases, that effectively consigned guised contract and causal workers to a life-time of job and wage insecurity. The last strategy has been the gradual repeal of existing labour law protections, which has come to a head in the Code of Wages, the industrial code, the code on social security and the code on occupational safety, health and working conditions.

Alongside deliberate, criminal and calculated mismanagement of Covid-19, the Union government is relentlessly pushing forward with its privatization agenda. Most recently, Finance Minister Nirmala Sitharaman unveiled the National Monetisation Pipeline (NMP) to “unlock” Rs 6 lakh crores, apparently by handing over everything - from passenger trains to railway stations to airports, roads and stadiums - all to private companies. Let us not forget that during this pandemic, Gautam Adani became the 2nd richest man in Asia, behind Mukesh Ambani who earned Rs. 90 crore per hour during the coronavirus pandemic. In comparison, around 24% of our people were earning Rs 3,000/- per month in the same period. When the parliament was called into session in August 2021, it truly, and yet again, exposed its class character. Basic questions about the conditions of workers were responded to nonchalantly by the Modi government. The Union Government said it had no information in regard to the number of labourers/workers working in various industrial organisations of the country and that all sections of society had been impacted by the pandemic. It said that there were no manual scavenging deaths even as it acknowledged 941 deaths of workers while being engaged in cleaning of sewers and septic tanks. There was not a single acknowledgement of the dire situation of majority of the people made destitute by the criminal mishandling of the covid pandemic, and struggling with the high cost of living and price rise.

It is in this backdrop that one needs to understand the importance of the Twenty-Fifth Report of the Standing Committee on Labour (2020-21) titled on 'Impact of Covid-19 on Rising Unemployment and Loss of Jobs/ Livelihoods in Organised and Unorganised Sectors', which was presented to the Lok Sabha and Rajya Sabha on 3 August 2021. AICCTU had submitted detailed submissions to the Committee for the purposes of this report. The Committee, in a broad sense, indicts the Union government. Moreover, it is apparent from the findings and recommendations, that the prescriptions made out by this Committee are totally at variance with the policy of the State to withdraw from protecting labour rights and its new economic policy.

Firstly, the Report is an official acknowledgement of the havoc played with the lives of people. It cites the ILO report and concludes that the Covid-19 pandemic has devastated the Indian Labour Market, dented the employment scenario and threatened the survival of millions of workers and their families (para 1.2). It has also concluded that the informal workers, both in rural and urban areas, who have been hit the most due to Covid-19 pandemic comprise the migrants, agriculture workers, casual/contract labours, construction workers, domestic workers, plumbers, painters, carpenters, street vendors, gig/platform workers etc. (para 1.3). In what is perhaps the first official acceptance of the impact on the organised sector, it concluded that due to job losses and wage reductions, during 2020, poverty shot up with the number of individuals who lied below the proposed national minimum wage increased by 230 million (para 1.4).

Secondly, the Report offers a scathing critique of the inadequate measures taken by the Modi government and state governments to counter the debilitating impact of Covid and the lockdowns. For instance, it found that the loans offered to street vendors under the PM-SVANidhi Scheme, though targeted at nearly 50 lakh street vendors could only reach 25.03 lakh street vendors, and recommended that the government must convert the loan credit amount into a direct cash grant. The committee confirmed the need for MNREGA, which Modi in 2015 lampooned as the “living monument of your failure to tackle poverty”, and recommended increasing it to at least 200 days per year. Pertinently, in relation to the urban poor, the Committee stressed the imperative need for an Employment Guarantee Programme along the lines of MGNREGA. The Report officially condemned the Union government for the treatment meted out to migrant workers stating that: “when the entire nation was witnessing a heart-rending sight of lakhs of migrant workers walking back to their native places helplessly without anything to fall back on, it was surprising that the Ministry waited for as long as two months i.e. until June 2020 to intervene” and that too after being goaded by the Supreme Court. Of extreme importance is the finding of the Committee that as per Udyog Aadhaar Portal, the number of micro, small and medium enterprises (MSMEs) registered since September 2015 to 30 June 2020 was 1,02,32,468. However, from thereon only 35,74,914 MSMEs have been registered, which implies that the lockdowns have substantially disrupted operation of MSMEs, which employ about 85-90% of the workforce.

Thirdly, the recommendations of the Committee are a scathing appraisal of the failure of the government to address the actual problems of the working class. The Committee notes that workers in the Unorganised Sector have been the worst sufferers during the lockdowns/shutdowns and recommends for direct cash relief to these workers. In light of the loss of jobs and livelihoods by workers in the organised sector, the Committee has recommended income support for them too. The Committee also recommends that fund allocation for health infrastructure should be increased and universal health care for all should be made a legal obligation of the Government. The Committee has hauled up the Union Government for the inordinate delay in publication of PLFS reports to gauge the rate of unemployment in the country. The Committee also doubts the efficacy of the mere issue of advisories to protect workers’ jobs and wages. Finally, the committee condemns the Union government for not issuing any guideline or any scheme which makes anybody responsible for providing any employment to the wards of any person who died due to Covid.

This Report, in no uncertain terms, is unwittingly a scathing critique of the Union government as also the State governments that have opted for the “shock doctrine” as opposed to taking any credible steps to protect the workers in these trying times. Indeed, this Report represents the challenges before the working class in the face of a state that is committed to protect the interests of capitalists at the cost of workers and the people. π