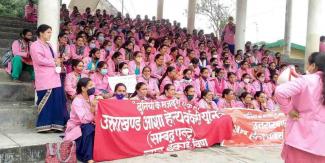 NOTE: The strike is withdrawn and put on hold for 20 days from 1st Sep based on assurance from the government and the Chief Minister that the government will issue necessary orders to resolve the issue within 20 days. Workers are fully prepared to relaunch the strike on 21st day if the assurance is not fulfilled.

The indefinite strike by ASHA workers (affiliated to AICCTU and CITU) in Uttarakhand state has entered its third week as the government has taken no decision so far. The state-wide strike has been going on since 2 August for monthly salary and other demands.

The Uttarakhand ASHA Health Workers Union affiliated to AICCTU issued a statement saying that the negligent attitude shown by the state government towards the ASHA movement is shameful. ASHA union delegations have met the Chief Minister, the Health Secretary, the Director of National Health Mission and DG Health, all of whom acknowledged that the ASHAs' demands are just and gave assurances of its resolution. But no action has been taken so far, raising a question mark on the modus operandi of the government.

It should be noted that on 23 July 2021 ASHA workers organized Block level protests all over the state and submitted memorandum to the Chief Minister but the government paid no heed. On 30 July, protests were held at District HQs but still the government remained deaf and blind. Therefore, ASHAs were forced to boycott the work. Prior to this, ASHAs have been consistently bringing their problems to the notice of the state government since its formation in 2017 but till date their demands have not been heard. State-wide work boycott and protests are being held from 2 August under the call given by Uttarakhand ASHA Health Workers Union affiliated to AICCTU and Uttarakhand ASHA Swasthya Karyakatri Union affiliated to CITU.

In a statement, the union asked how much longer will ASHAs be oppressed in the name of service. The struggle for rights, safety and dignity in Uttarakhand has reached a ‘do-or-die’ battle now. The movement is now united across the State. ASHA workers will remain on the streets for their wages and dignity until the government announces monthly salary for ASHAs. ASHA workers have organized this historic work boycott across the entire State and now this fight will end only after the government ends its oppression of ASHAs.

The Union further said that ASHAS, who are deployed primarily for mother-infant safety and protection, are being made to work for Covid, Pulse Polio, vaccination, family planning, dengue, malaria, ORS distribution and all kinds of surveys and campaigns. They do not get a moment to spare for their own families but the government does not pay them even a single rupee as monthly salary and do not even recognise them as workers.

During the entire Corona period ASHAs were not provided with adequate safety kits and yet they put their lives at risk to do Corona duty and for the better health of the country. A large number of ASHAs and their families became infected with Covid. Uttarakhand ASHA Health Workers Union State President Kamla Kunjwal said in Haldwani that instead of making Anganwadis do the work of ASHAs, the government should pay ASHAs the honorarium like the Anganwadi teachers. She said that the government, rattled by the ASHAs' movement, is trying to break the unity of ASHAs and is using the BJP's pocket organization Bharatiya Mazdoor Sangh for this purpose. Some ASHAs affiliated to BMS are being used to spread confusion among ASHA workers. ASHAs asked, “If the BMS was really concerned about ASHAs, why did they not resolve the ASHAs' issues with their double-engine government during the last four and a half years?

The all-India joint platform of Scheme workers and the All India Scheme Workers federation (AISWF) have expressed their unwavering support to the strike. ASHA workers affiliated to Delhi ASHA Kamgar Union has also expressed solidarity.

the ASHA workers include:

Credit the Corona allowance announced by the former Chief Minister immediately into ASHAs' accounts and pay all ASHAs at the rate of Rs 10,000 per month from the commencement of Corona duty.

Pay Rs 50 lakhs insurance and 4 lakhs ex gratia amount to dependents of ASHAs who died on Covid duty. Pay special monthly allowance to dependents of such deceased ASHAs, as is being done in Odisha.

Government employee status and a minimum of Rs 21,000 salary for ASHA workers.

Till such time as monthly salary and government employee status is not implemented, monthly honorarium for ASHAs should be fixed at Rs 10,000.

Pension for all ASHAs upon retirement, and a lump sum package for ASHAs who have developed knee problems while doing duty on foot.

Make safety rules in case of accident, heart attack, or illness while on duty and provision for a minimum of Rs 10 lakhs compensation.

Make timely payment of all dues with arrears.

Curb corruption and commission-mongering that is rampant at lower levels in payment of various dues to ASHAs.

Appoint specialist doctors without delay at all government hospitals.

Ensure respectful and dignified behaviour with ASHAs in hospitals.

ASHAs should not be used for Corona duty until separate Corona monthly allowance is provided. π