Industrial Relations Code: An Attack on the Right to Strike and to Organise 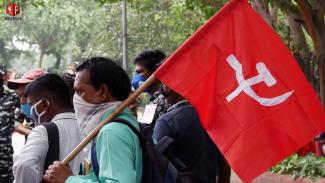 The central government has recently passed four anti-Labour Codes that, in the name of ‘ease of doing business’, effectively crush the hard-won rights of the working class. One such right that has been heavily impaired  is the right of workers to organize and collectively bargain. It has been done through the heavily problematic provisions in the Industrial Relations Code (hereinafter the Code) which replaces the Industrial Disputes Act (ID Act), 1947, the Industrial Employment (Standing Orders) Act, 1946 and the Trade Unions Act, 1926. This note will discuss the attacks made by the Code specifically on the right to strike and the right to unionise.

Attack on the Right to Strike

Majority on Leave is also Strike

The IR Code attacks the idea of strikes both substantively as well as procedurally. At the very outset, the definition of the term ‘strike’ itself has been altered to include “the concerted casual leave on a given day by fifty per cent or more workers employed in an industry”. Therefore, if more than half the workers in an establishment go on casual leave together, then that would not only amount to a strike, but all the consequences of illegal strike would flow, if prior strike notice were not given as per law.

This brings us to the second major change, which is the requirement of prior notice for strike in all industries. Whereas the 1947 Act made prior notice of strike mandatory only for public utility services, but now, 14 days’ advance notice of strike is mandated across the board. Effectively, even in cases of blatant violations by establishments and in situations that require urgent collective action on the part of the workers, they must wait half a month to exercise their rights. This is contrary to the use of strike as a weapon of last resort for most workers.

And finally, what would be the consequences that flow from a strike that the new Code now terms illegal? In terms of the Code, the penalties have been heavily increased. The penalty for those who commence/continue illegal strikes have been extended from upto 1 month imprisonment or a Rs.50 fine to one month imprisonment or a minimum fine of Rs. 1000 extendable upto Rs. 10,000, or both. Therefore, the worker could face imprisonment for a month as well as a fine that is close to his/her monthly salary for simply striking work without giving half a month notice. Similarly, the fine for those who incite or instigate participation in an illegal strike, or knowingly spends money in furtherance of it has been increased to a minimum of Rs. 10,000 to a maximum of Rs. 50,000,

The sheer absurdity of this must be appreciated. For instance, take a case of a worker having fallen to death due to criminal negligence of the employer. Suppose the  Union spontaneously decides to strike work and collects Rs. 5 from each of its members to print pamphlets for public distribution. Under the Code, each worker who paid Rs. 5 would be liable to pay a minimum of Rs. 10,000 up to Rs. 50,000, which may be imposed alongside imprisonment for a month!

The right to strike in India, is not a fundamental right, but a statutory right. However, courts have repeatedly stated that this right is an integral facet of the right to collectively bargain. It must be remembered that in a capitalist economy, the worker has no utility except for his/her labour. It is only when the labour done by his/her daily work is impacted that her voice may be heard. Thus, when the unequal power equations between managements and workers are considered, strikes are often the only mechanism for workers to challenge violation of rights.

International Labour Organisation body of principles on the right to strike make it absolutely clear that the right to strike must be considered as a “fundamental right to be enjoyed by workers and their organizations (trade unions, federations and confederations), which is protected at international level, provided that the right is exercised in a peaceful manner”. Moreover, “The obligation to give prior notice … where this does not cause the strike to become very difficult or even impossible in practice.. are all acceptable conditions for the exercise of the right to strike.” The principles also state that “any sanctions imposed in the event of abuse should not be disproportionate to the seriousness of the violations.”

India is also a signatory to the International Covenant of Economic, Social and Cultural Rights (ICESCR), which in Article 8 provides that the States, the parties to the Covenant, must undertake to ensure: "the right to strike, provided that it is exercised in conformity with the laws of the particular country”.

The dilution of the right to strike in the Code causes strikes to be very difficult or impossible in practice, and is a violation of international principles on Strike.

Leaving aside, for the moment, the appalling new formulation of the law on strike, at a more foundational level, the Code also attacks the very concept of freedom of association by imposing unprecedented restrictions upon Trade Unions. For one, the Code allows for withdrawal or cancellation of certificate of registration of a trade union by a Registrar simply “on the information received by him regarding the contravention by the Trade Union of the provisions of this Code or the rules made thereunder or its constitution or rules.” These are vast and un-circumscribed powers that would lend themselves to arbitrary attacks on the freedom of association. Whereas prior notice and reasons for cancellation are required to be provided, there is no requirement to give an opportunity to be heard, in a clear violation of the principle of audi alteram partem. The Code also directs that certain persons may be disqualified for selection as an office bearer of a Union if a Tribunal so directed. This vast power given to the Tribunal is again a clear attack on the freedom of association itself.

Again, these provisions would lead to absurd consequences. Take the case of a Trade Union, which takes the decision to increase membership from Rs. 10 a month to Rs. 15 a month. By a simple blunder, the Union overlooks to inform the Registrar of this, despite the mandate to inform of any changes. Then, the registration of the Union itself is liable to be cancelled! It is clear that massively disproportionate consequences could accrue.

Moreover, yet again, penalties against Trade Unions have been dramatically increased. Under the TU Act, defaults in sending required notices would result in office bearers being liable to pay a fine of Rs. 5, which could be increased up to Rs. 50 in case of continuing defaults. The maximum initial punishment has been extended from Rs. 5 to Rs. 10,000, with a minimum punishment of Rs. 1000 being brought in. Moreover, continuing defaults are now not subject to a reasonable limits, but continue at a penalty of Rs. 50 a day so long as the default continues. So if a Union failed to send a notice of change of name, and this was not realized till a period of 5 years had passed, the Union would be liable to pay almost a lakh as fine.

Right to Organise and Collective Bargaining

It must be noted that the rights of workers to organize and collectively bargain is well settled in international laws. Articles 3 and 4 of the ILO Convention No. 87 - Freedom of Association and Protection of the Right to Organize Convention, 1948 are especially relevant:

1. Workers' and employers' organisations shall have the right to draw up their constitutions and rules, to elect their representatives in full freedom, to organise their administration and activities and to formulate their programmes.

2. The public authorities shall refrain from any interference which would restrict this right or impede the lawful exercise thereof.

Article 11 of this Convention No. 87 also states that “Each Member of the International Labour Organisation for which this Convention is in force undertakes to take all necessary and appropriate measures to ensure that workers and employers may exercise freely the right to organise.”

Neither this convention nor the ILO Convention No. 98 on Right to Organise and Collective Bargaining Convention, 1949 have been ratified by India. However, the fundamental right to organize flows from Article 19(1)(c) of the Constitution, which protects the fundamental freedom to form associations.

When boiled down to the fundamental changes in law being brought in by the Code, it becomes extremely clear the government is pursuing an anti-worker agenda. The rights of workers to organize and strike are diluted and heavily penalized, whereas the right of the management to oppress is not tackled. The crony-capitalist government, which is involved in an agenda of privatization of public corporations and loot of the paise of workers to add to the overflowing coffers of private entities is evident. By way of the Code, what little legal protections the workers had are being steadily chipped away at. The way forward can only be through massive people’s movements against erosion of rights by the government.