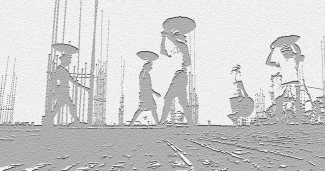 A Protest by Construction Workers of Kolkata

The West Bengal construction workers union organised a demonstration in front of the Office of the labour minister and handed over a memorandum. This demonstration took place on 27 August, despite inclement weather. General body meetings, street corner meetings were held in different places preceding the demonstration.

The memorandum highlighted the plight of construction workers of Bengal and condemned the fact that the state government has not disbursed a single penny to workers during pandemic from the cess fund despite several other state governments already transferring some cash benefits to construction workers in the country. The memorandum also highlighted that approximately 12,000 crores is still lying with the welfare board after spending some amount during 2013-14 and 2016-17.

The memorandum also condemned the complicated administrative method adopted by the labour dept for the enrolment of workers in the welfare scheme. The method of online enrolment only through portal has rendered large number of workers out of its coverage.

The MIC Labour Sri Beccharam Manna met the delegation along with the Labour Commissioners. The Minister assured to rectify technical glitches regarding the portal within a week. He also said that the workers who failed to pay their subscription for last three years will not be discontinued. He assured to rectify the delay in pension payment and to re-introduce a few welfare benefit schemes which are not within the general category of the state government.

He gave no assurance on cash benefits saying that it is a policy decision to be taken by the Finance and Chief minister.

Com Prabir Das, state president of the construction workers union presided the mass meeting that continued till the team return to submit the details of the talks with the minister. π

A construction labour from Bihar Plaiganj constituency, Mr Ajay Shah, who worked as a construction labour in Thiruvarur of Tamilnadu, was found hanging at the work site on 5 July 2021. The incident was reported to the police by his Bihari colleagues, an FIR was registered and the body was kept at the mortuary in the hospital.

Anticipating police harassment, the Bihar workers fled to Bihar. When the incident was known to CPI (ML) MLA of Paliganj constituency, Comrade Sandeep Saurav, the matter was referred to the Tamil Nadu state General Secretary of AICCTU, Comrade Desikan.

Com.Veera selvan, state council member of AICCTU from nearby Mayiladuthurai was deputed to visit Thiruvarur to ascertain the facts. Veeraselvan along with some other comrades visited the work site, had enquiries with police and district administration. Then, it was known that the body of the deceased was kept at the mortuary without post-mortem. The District Collector and Superintendent of Police were forced to intervene in the matter. A suspicion shadowed the death and the administration was asked to speed up the investigation. Sensing intervention by AICCTU and of a possible demonstration, the district administration arranged a tripartite meeting with the builder and AICCTU. District administration was represented by police officials. AICCTU demanded to videograph the process of postmortem, decent burial of the body and proper compensation to the family of the deceased. Bihar MLA comrade Sandeep also directly spoke to the police officials over phone.

The district administration yielded to our pressure and a postmortem was conducted with the presence of our comrades with videography. It was also agreed to have a decent burial in the presence of their family members. After prolonged negotiations, the builder was forced to agree for a compensation of Rupees 5 lacs.

Accordingly, the Builder arranged air ticket for three of the family members of the deceased to arrive at Thiruvarur. Ajay Shah's daughter along with two family members arrived at Chennai. Comrade Eraniappan, state honorary president received them at Chennai airport and send them to Thiruvarur. Gunasekaran, state committee member of CPI (ML) along with Veera selvan of AICCTU, arranged for Ajay's family members to pay their last respects. As agreed, the Builder credited the amount to the bank account of Amirta Kumari, wife of the deceased, on the same day.

The family and villagers of Paliganj organised a meeting and thanked CPI(ML) / AICCTU for standing with the people at the time of distress. The entire village resolved to be part of the people’s movement. π