Monetisation Pipeline or Destruction of Infra in the Pipeline? 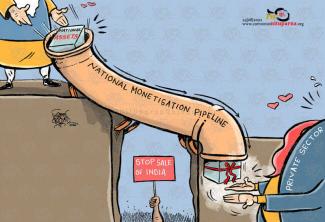 The Modi government has embarked on a programme to ‘lease out’ (read – sell out) all national infrastructure assets created since Independence to its friends in the private corporate sector, a programme which is euphemistically named as 'Asset Monetisation'. In other words, the government is demonetising public assets and selling the family silver in an unprecedented and unimaginable manner, with the sole aim of filling its empty coffers and profiting its corporate friends in the private sector, in the process. The Modi led BJP government has gone totally bankrupt.

The assets which the government wants to sell now include several sectors – railways, roads and highways, power, telecom, ports, mining projects and airports. 26,700 km of roads, 15 railway stations, train operations and tracks will be leased out. In the power and communication sectors, 28,608 circuit kms of power transmission lines, 6 GW of hydroelectric and solar power assets, 8,154 km of natural gas pipelines and 3,930 km of petroleum product pipelines as well as 2.86 lakh km of fibre assets and 14,917 towers in the telecom sector are up for lease.

In the road sector, the government has already monetised 1,400 km of national highways worth Rs 17,000 crores. Another five assets have been monetised through a Power Grid InvIT fetching Rs 7,700 crore. 25 airports (the stakes of central govt in existing airports), 160 coal mining projects, 31 projects in 9 major ports, 210 lakh MT of warehousing assets, 2 national stadia and 2 regional centres will be monetised too. Redevelopment of various government colonies and hospitality assets, including ITDC hotels, is expected to fetch Rs 15,000 crores to the coffers.

The list is endless. Even heritage projects such as Darjeeling’s toy train and Kolkata’s Metro Rail have not been spared. We never witnessed such a mega sale project of this scale in the country. The backbone of the country’s economy, its infrastructure –roads, rails, ports, airports, projects – are being handed over on a platter to the private sector.

Thy Name is Monetisation:

The plan of monetisation was first mentioned in the last Budget, which identified 'Monetisation of Assets” as “one of the three pillars” of the economic policy of the future. NITI Aayog was then entrusted to create a "National Monetisation Pipeline (NMP)” to serve as an essential roadmap for the asset monetisation of various brownfield infrastructure, across various sectors. The National Infrastructure Pipeline (NIP) envisages infrastructure investment of Rs. 111 lakh crores over a five years period from FY 2020 to FY 2025, pledging 71 per cent of expenditure for energy, roads, urban development and railways and entrusting a key role for private corporate investors. NIP started with 6,835 projects, which has now increased to 8,156. The projects involve around $1.9 trillion of investment, spread over 34 sub sectors with 1,869 projects under development.

The NMP is supposed to contribute significantly towards the NIP. Roads, railways and power sector assets will comprise over 66 per cent of the total estimated value of the assets to be monetised. The estimated amount to be raised through monetisation is around 14 per cent of the proposed outlay by the Centre under NIP.

In its two volume publication, "National Monetisation Pipeline", NITI Aayog categorically mentioned two critical objectives behind this move – “unlocking value from public investment in infrastructure and tapping private sector efficiencies in operation and management of infrastructure”. So, it is clear that public infrastructure that was created out of huge public investment in the past is now being leveraged for the interest of private sector. This is, in tandem, with the reckless privatisation and disinvestment drive of public and government sector by the Modi government.

The government has peddled the logic that this ‘monetisation’ is not tantamount to privatisation of public infrastructure. According to this argument, revenue rights are now being transferred to private parties for a specified transaction period, in return for upfront money, a revenue share, and commitment of investments in the assets.

This outright selling of national assets will fetch Rs. 6 trillion within a span of 4 years. There is, however, no clarity on how this value has been arrived at - for instance, on whether the inflation has been taken into account or not.

Mirage of Growth and

According to the NITI Aayog, incremental annual investment of 2- 3 per cent of GDP envisaged under NIP would enable double-digit economic growth, which in turn would ensure enhanced economic activities and employment opportunities in a post-crisis economy. Let us revisit the claims of disinvestment targets made by the government in the past.

In the 2021-22 Budget, the disinvestment target was Rs. 2,14,000 crores. This was a most ambitious target we had seen till now. Three quarters of this time period have already gone, and only 5.14 per cent of the sales target has been achieved so far. The 2020-21 Budget had set a target of raising Rs. 2.1 lakh crore from disinvestment and only 15.64 percent of the total target was achieved. Due to non- realisation of targets, the position of fiscal deficit deteriorated. It has jumped to 9.5 per cent in FY 21 and is likely to be 6.8 per cent in FY 22.

Demonetisation, GST and tax cuts to corporates to the tune of Rs. 1.45 trillion in 2019 were a series of policy disasters that battered and bruised the economy even before the pandemic. The Modi government’s disastrous policies have brought the economy to its nadir. GDP shrank by 2.8 per cent in a single quarter, nose-dived by 7 per cent for the full year which is the highest drop in any major economy in the world. As a result, the government’s revenue plummeted and government deficits jumped to nightmarish proportions, thus forcing the government to borrow record amounts only to meet essential expenses.

Before the pandemic, the Modi government extracted a whopping amount from RBI's contingency fund and also forced the PSUs to pay a huge amount of dividend. It has found funds to the tune of 20,000 crores for the Central Vista project, it has bought two Boeing aircrafts worth Rs. 810.23 crores and spent Rs. 3000 crores on the Patel statue. However, the same government has not imposed a COVID Tax on billionaires, and has not disbursed any money to the teeming millions devasted by the pandemic. Thus, all these claims of salvaging the sagging economy and generating employment through asset monetisation is nothing but a mirage.

In his Independence Day speech, Modi declared a National Infrastructure Master Plan, 'Gati Shakti', worth more than Rs. 100 lakh crores. He claimed that this would provide "new employment for lakhs of youth”. The same announcement was made on 15 August 2019, where again a promise of Rs. 110 crore investments for enhancing employment opportunities were made, a promise which remains unfulfilled till date. We can only read these recent claims as the worst examples of pathological lies being spewed by the highest office of the country.

For the sake of argument, let us assume that asset monetisation would enhance new employment opportunities in brownfield infrastructure. What would be the nature of such an employment? All vendors and stalls will be evicted from railway stations and will be handed over to the corporates. The employment generated by the corporates will be nothing but contractual, precarious, low paid sans all statutory benefits. The private sector entity, as envisaged by NIP, is expected to generate returns through 'higher operating efficiencies’, and such contracts include provision for transfer of assets back to the public authority at the end of such contracts. So, decent working conditions, minimum wages, social security, and to be precise, increased overhead costs will be sacrificed at the altar of profit generation. Asset monetisation, thus, will only create new groups consisting of millions of enslaved labour, the sordid signature of Modi and BJP rule. π