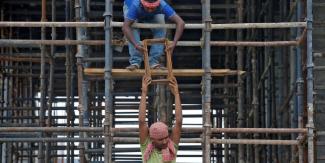 Despite the fact that migrant workers are indispensable to the creation of an urban city, the migrant worker as a category has been made constantly invisible.  These invisible masses of workers came into the spotlight only during the brutally imposed lockdown, when the country saw an exodus of reverse migration and brutal deaths of hundreds of workers while making the long journey home. Despite their invisibility, the category of migrant workers is massive. Even as per the 2011 Census, which is now a decade out of date, the population of migrants who cited ‘work / employment’ as reason for migration was 11,372,887 (intra-state) and 5,850,970 (inter-state) across India.

Whereas the rights of intra state migrants are not specifically protected, the rights of interstate migrants were protected by a 1979 Statute. The Inter State Migrant Workers (Regulation of Employment and Conditions of Service) Act, 1979 [hereinafter referred to as the 1979 Act], was enacted with the intention to counter the abuse seen in the system of recruitment of migrant workers by contractors.  This 42-year-old law is now one of the enactments subsumed within the Occupational Health and Safety Code [hereinafter the OHS Code], which has been passed in parliament and remains only to be notified.  Unfortunately, the agenda of the OHS Code is clearly pro-corporate and capitalist. The few protections retained seem more for name-sake value than anything else. A number of vital provisions have been deliberately excluded to deprive migrant workers of their rights.

The OHS Code includes the category of inter state migrant workers within the definition of contract worker. Therefore, many of the provisions in the 1979 Act are no longer specifically provided to migrant workers but are subsumed within general rights of contract workers. However, we must note that even those rights are heavily diluted. Take the welfare facilities under sections 23, 24, and 53 of the OHS Code - they have by and large been made subject to discretion of government and are not mandatory. For example, provision of drinking water and crèche which were previously mandated under the Factories Act are now subject to the discretion of the government. Importantly, the specificity of the 1979 Act allowed for the specific inclusion of recruiters in the definition of contractor, which resulted in its increased liability. However, no such inclusion has been made in the OHS Code.

Importantly, the definition of inter state migrant worker of the OHS Code now includes not only those who are recruited from another state, but those who have come by themselves to another State for employment. On one hand, this can be seen as beneficial, since it increases coverage to some extent. However, this change is accompanied by the deletion of a number of entitlements under the 1979 Act.

Some of the entitlements under the 1979 law that have been deleted include the following:

The right to displacement allowance of 50% of monthly wages

The right to journey allowance and wages for the time of journey.

The right to protective clothing

Not only this, but the mandate under the 1979 Act of furnishing details of interstate migrant worker to the home state and the host state is done away with. Significantly, the requirement of providing each interstate migrant worker with a passbook with details of the name and place of the establishment, the period of employment, the proposed rates and modes of payment of wages, the displacement allowance payable, and the return fare payable to the workman on the expiry of the period of his and deductions made is now gone.

Another noteworthy change is the lack of a mandate to equal treatment to migrant and local workers in the OHS Code. Section 13 of the 1979 Act, which mandates equality in wage rates, holidays, hours of work and other conditions of service is sought to be replaced by section 60(iii) of Code, which requires the employer or contractor to extend all benefits to such workers which are available to a worker of that establishment including statutory benefits such as ESI and PF. Wage rates, holidays, hours of work, are conditions of service and are not benefits, and might not fit into Section 60(iii).

The regime of inspection has also been heavily diluted in the Codes, with the introduction of an Inspector-cum-facilitator, a web-based inspection model and randomized selection of establishments for inspection. There is also a lessening of penal consequences for violations - for example, the imprisonment period for obstruction of inspectors is reduced from 2 year to 6 months. Most vitally, under section 110 of the OHS Code, there would be no prosecution without giving opportunity for compliance, and in case of compliance, there would be no penalty. Compounding of offences is allowed, with the compensation amount going into a general fund and not to the worker who had faced violation of rights. The 1979 Act itself was rarely implemented. And now its provisions lie significantly diluted. However, the deletion of entitlements in law must be seen as a drastic political shift, and which is reflected not only in regard to labour but also in the context of farmers, environmental assessments, land rights etc.

Of course, the Code does bring in a few new aspects around migrant labour. Most have no inherent benefit.  For example, Section 21 of the OHS Code provides for the government to maintain a database of interstate migrant workers in a form and manner as may be prescribed by the Central Government. There is no clarity in the contents and scope of this database. The creation of a database is not per se helpful to migrant workers, and may, and in these times almost certainly will, be used to their detriment. While the database will include the category of self-employed migrant workers, their recognition is limited to this aspect, and no further mention of them is made.

Other new introductions in sections 63 and 64 of the OHS Code are Toll Free Helpline and Study of interstate Migrant Workers. However, these are not made mandatory, but are left to the discretion of the appropriate government. Many states did indeed create toll free helplines during the pandemic. Effectively, these provisions are absolutely lacking in force and totally unnecessary except for a display of sham benevolence.

The OHS Code was brought through parliament at the crucial juncture of pandemic, when migrant workers were seen as a category of people whose dignity was being trampled upon by the State and whose very right to life was imperiled. The natural act of a country that was concerned with the interests of its people would be to tighten the law in favour of the workers to ensure some level of social and economic justice. On the contrary, what is seen is further liberalization, prioritization of ‘ease of doing business’ and destruction of hard won rights. π