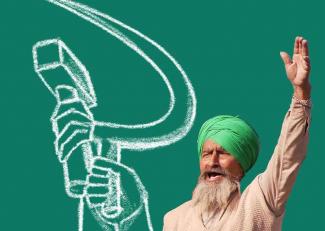 The Joint Meeting of the Platform of Central Trade Unions & Sectoral Federations/Associations with Samyukta Kisan Morcha held on-line on 28th April 2021 unanimously resolved to carry forward and intensify the united workers-peasants struggle against the anti-people, anti-farmer, anti-worker destructive policies of the Central Govt.

The joint workers-peasants meet appreciated the stronger bond of solidarity emerged between the struggles of the two main productive forces in the country against the outright destructive policies of the Govt at the centre which is acting to destroy peasants’ agriculture as well as indigenous manufacturing capacity of the national economy through retrograde Farm-laws, mindless privatisation drives covering all industries, services, natural resources, health and education sector –almost everything. At the same time conditions of slavery is being sought to be imposed on the working people through enactment of Labour Codes along with curbing democratic rights, freedom of expression, right to dissent etc in numerous ways in a total authoritarian direction with a fascistic intent.

Such destructive and barbarous policies are very much reflected in cruel insensitivity of the Govt in addressing the second wave of Covid Pandemic causing numerous preventable deaths throughout the country and the tragically inadequacy of public health network–the grievous fall out of privatisation oriented as well as dismantling and weakening of public health care system. Added to that is the retrograde Vaccine policy announced by the Central Govt. led by Modi to promote profiteering in vaccine sale at the cost of lives of people.

The meeting denounced such barbarous policy of the Govt which is failing in meeting the challenge of Pandemic and demanded scrapping of the pronounced vaccine policy and ensuring free mass universal vaccination for all.

The meeting decided to observe May Day jointly highlighting the demands and rights of workers, peasants and people throughout the country in as many locations as possible.

The Joint Platform of Central Trade Unions (CTUs) and Samyukta Kisan Morcha (SKM) will again meet during middle of May to concretise future course of joint action programmes.