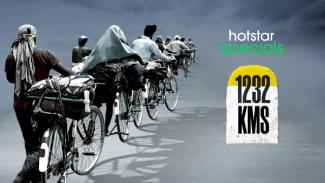 A Formidable Journey of Life Over Death!

The documentary film 1232 Kms is a vivid chronicle of the agonies of the poor migrant labourers in the unprecedented lockdown during Covid-19 in India. The film accompanies the journey of seven migrant labourers to their native homes from Ghaziabad in Uttar Pradesh to Saharsa in Bihar covering a distance of 1232 Kms. The labourers working in Delhi construction sites decide to leave to their homes after going through the enormous hardships and difficulties of extended lockdowns and left with nothing to fend for themselves. They manage to buy secondhand cycles from the money sent by their families and step into the journey towards home, hope and the familiar world of family and love.

The city that they constructed through their bare hands, the city that gave them sustenance for years, the city that held them the promise of a better future, betrays them at the moment of crisis. There is no food, no work, no house and no belongingness. The city turns into an unfamiliar, alien and inhuman labyrinth. The city’s vast population vanishes into holes. The workers are left orphaned under the sky. All of a sudden, they are caught up in a quagmire of starvation or disease that in all likelihood will take their lives.

The workers are faced with a do or die situation. They are desperate to escape from this impending danger of death. And they are terribly worried that their families at the other end maybe going through a lot of suffering all alone in the pandemic. So they risk this journey with the minimum paraphernalia of cycles, clothes, mobile phones and tools.

The film is a testimony to the travails of migrant labourers in a country that has blindly shut it doors to the poor and deprived at the time of a fearsome pandemic. The grit with which the workers carry on their journey despite hunger, tiredness, sickness and every other trial that they face with the police and the screening camps is the substance of the film.

The memories of their loved ones, the sense of security and belongingness that they harbor about their native and the genuine concern and care for their family keeps this harrowing journey and the film a positive one. The phone calls as a connect to the family that keeps their spirits and determination high and a kind of running commentary-like updates to the family that keeps their families in spirits adds a sense of mutuality to this journey.

In a way, the pain, the despair, the helplessness and despondency are unwinded in the interaction with the filmmaker as much as the other emotions of love and hope. The philosophy of life that guides them through the stark poverty, grim realities and the total abdication of responsibility by the state is ruminated all through the film. At one point, one of the labourers recounts that he felt absolutely upset with the God when they were detained in a place by the police and not permitted to proceed with the journey. Another labourer observes that this disease was brought by the rich but the poor had to face the brunt of it. One of the family members cries over phone that they are being treated as untouchables, not even allowed to fetch water from public hand pumps. Almost all the labourers feel sad and helpless that they are in such a pitiable state that they cannot fulfill the little expectations of gifts of the kids. One cannot miss the solidarity and cooperation of all labourers in the journey.

The film captures the tribulations of the time as much as the generosities that flew from unknown quarters. People offering food, shelter, water, lift in trucks, repair services despite the restrictions of lockdown and lightening the pain to a little extent. On the other the complete apathy of the officials in handling the migrants is exposed – police beating and detaining the migrants, not providing food for more than a day in quarantine, unclean and unsanitized quarantine facility and so on.

Seven days. Seven journeys. Like the mythical crossing of seven seas and mountains. No, this is not the story of these seven labourers alone. This is a leaf from the story of 30 million migrant labourers who staked reverse migration. Nearly 350 migrant labourers died in the course of their journey. Will the government take any responsibility for the deaths and the huge exodus?

The leit motif of the film Come Home, O Foriegner! provides an additional emotional touch throughout the film. Director Vinod Kapri has done a commendable film taking a lot of risk in an unusual situation and handling the theme in a sensitive manner without being intrusive. Music score by Vishal Bharadwaj, Lyrics by Gulzar and Singing by Sukhwinder Sing and Rekha Bharadwaj have lifted the film’s effect.νν