The New Pension Scheme Must Go! 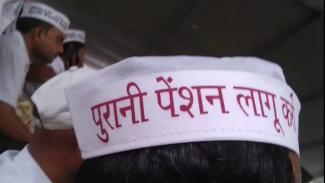 The Atal Bihari Vajpayee led NDA government enacted an ordinance on December 22, 2003, imposing a New Pension Scheme (NPS), based on the vagaries of stock market dynamic and removing the entitlement of the old pension scheme (excluding the armed forces), to those who joined as government employee on or after January 1, 2004. Except for two or three states every other state in India adopted it. The root of the NPS lies in the LPG (Liberalisation, Privatisation and Globalisation) policies imposed on the country way back in 1991 by the Congress government led by Narasimha Rao-Manmohan Singh. Every right of citizens of India were allowed to be sacrificed for the sake of private profit seeking. The ruthless privatisation invaded the right to secured pension for employees.

The statement of the then-Finance Minister Mr. Jaswant Sinha while introducing New Pension Scheme in the Parliament in 2003 made the intention of the government very clear. He said that the financial burden, because of pensions, is mounting on the shoulders of the government; one day, the government would be unable to handle this burden and then, the country's economy is bound to be devastated. He also revealed the government’s intention obvious by saying that the government was introducing a new market-based pension scheme based on a fixed deduction rather than a fixed payment in order to relieve itself from this heavy burden. In a way, Mr Jaswant Sinha also made it absolutely clear that the NPS is designed to take a share from hard earned money of employees, rather than to ensure their rights in their unproductive age.

On the other hand, the country's Supreme Court and the International Labour Organization (ILO) have clearly stated that the pension provided to employees is not a charity from the companies or the government, but it is their own benefit out of their investment. This cannot be stopped or diverted elsewhere without their approval. Pension is that portion of an employee's salary that is unpaid to them while they were in service. Despite this, the government designed a pension policy that created an unsecured future for the next generation who were yet to enter the workforce. Today, the new employees believe that those who designed this disastrous scheme have taken away their benefit for the future of post-retirement. Today’s employees question that if our MPs, MLAs felt so good about the NPS, why don’t they implement it for themselves?

We must evaluate any policy based on its theoretical foundations and the impact it is supposed to create in the society. The theoretical foundation of the NPS lies in the private profit seeking ideology of neo-liberalism. This policy has been designed to facilitate profit seeking by the companies at the cost of secured future of the citizens. Secondly, the experience of the people of the countries, where pension rights were snatched away in favour of private capital, tells us how miserable people can become if their pension rights are taken away. In countries where similar schemes have been implemented since 1974-75, starting from Chile in South America to various other countries of North America and Europe, people’s lives are devastated after worldwide economic slowdown of 2008. Most of the companies fled the countries or closed down their shops for the fear of decreasing profits, shedding the responsibility towards the future of their employees.

When the NPS was introduced in India, we started looking at its implications. We began reaching out to workers. Right now, we are witnessing an extremely vulnerable situation into which the senior citizens pushed into. Pensions at the rate of Rs. 523, 753 and 1044 are being given to ex-employees. In states like Bihar, the amount disbursed as pension does not even cross Rs. 100 for many ex-employees.

As soon as the cruel face of the NPS popping out, workers of Indian Railways and several other government services began organising themselves against the NPS, demanding restoration of old pension scheme. On 20th of August 2017, the 'Front Against NPS in Railways' was formed with the demand to restore ‘Old Pension Scheme’ in railways. Several other platforms to fight against NPS were also floated in various states. An organisation called the ‘National Movement for Old Pension Scheme’ was also formed. These organisations went on bigger mobilisations in the national capital throughout the years 2018 and 2019. The pressure, thus generated, forced different opposition parties to take a stand against the NPS.

The perils of the NPS are hidden to no one anymore. Together with the fight against privatization, the fight against NPS will have to be carried forward. Taking inspiration from the victorious farmers’ movement, the struggle of the Indian working class for a secured future will only intensify. The Front Against NPS in Railways and the National Movement for Old Pension Scheme have taken up the task of fighting the battle against NPS until its logical end. The movement will not relent until the Old Pension Scheme is restored.

(The Author is the National President, Front Against NPS in Railway)

An example - Shri VV Geeteswaran, Loco Pilot of a goods train, Palghat Division, Kerala, joined the service in 2005 and retired on 30 May 2021. His basic pay was Rs. 41,100. At the time of his retirement, total funds accumulated in his NPS account was Rs. 18,37,000 and out of this total amount, he received 11 lakh rupees as onetime payment and Rs. 3400 as pension, which will remain frozen as this scheme is not eligible to get the benefit of Dearness Allowance. Moreover, this amount of Rs 3400 as pension will also decrease in its real value in the coming years in the face of sky-rocketing prices. Now, had this employee retired under Old Pension Scheme, he would have been a rightful beneficiary of Rs. 14 lakh as one-time lumpsum payment and a monthly pension of Rs 25000 with an addition of increasing DA every six months, based on the level of rise in prices. νν