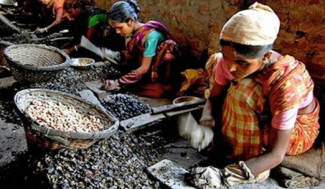 While the economy is still languishing, the Finance Minister unabashedly claimed that the Indian economy is now on the path of robust recovery and has "put the effects of the pandemic far behind". This was the FM's  statement at the "Leadership Summit" organised by Hindustan Times. In the same summit, on 4 December 2021, Home Minister Amit Shah went a step ahead and said, "Indian economy is  fastest in the world to come out of the impact of the coronavirus pandemic because of the policy decisions taken by Modi Government".

Sadly, the very next day, on 5 December,  Nobel laureate Abhijit Banerjee brought out the real picture of the Indian economy in his online keynote address to the students of Ahmedabad University and mentioned, "... People in India are in extreme pain” with "small aspirations of the people becoming even smaller now. The economy is still well below as against what it was in 2019 … substantially below".

At the summit organised by Hindustan Times, the Finance Minister had unhesitatingly stated that one of the focus areas of the Indian government’s policymaking is to "aggressively  pursue ease of doing business while at the same time, burden of compliance has to be reduced substantially". This is a clear message to the corporates that all the remnants of labour laws will not be a 'burden' on the corporates henceforth, and the policy of encouraging and expanding ease of doing business will pave  the way for "robust economic revival ". She did not forget to mention that the government had already waived off Rs 1.45 lakh crore of corporate tax with an aim to boost investors sentiment and to revive the economy. This waiver – first implemented in March 2020 and again in April-May this year – was announced with much fanfare, but the government is silent on the billion dollar question of whether or not this financial push actually helped to  salvage the battered economy. The Modi government wants to use a combination of these three policy initiatives –

slashing corporate tax, expanding the ambit of ease of doing business and reducing the burden of compliance – to revive the economy, without alleviating the purchasing power of the teeming millions and the aam aadmi. In other words, the government is refusing to address the problem of aggregate demand.  All the policies pursued henceforth has only exacerbated  the yawning gap of inequality, starkly brought out by the recent World Inequality Report 2022. This report pointed out that India has emerged as the most unequal country with the top 1 per cent of the population holding more than one-fifth of the total national income in 2021.

It is a matter of fact that despite all these efforts, the Indian economy is still below the pre- pandemic level. The mandarins in the corridors of power assumed that India's vast informal sector would grow in tandem with the formal sector, but the pandemic disproportionately bruised India's informal economy. The CEO of CMIE, Mahesh Vyas has pointed out that since the beginning of the pandemic, at least 10 million Indians have lost stable, well-paying salaried jobs. Even a report published by the Azim Premji University titled "State of Working India, 2021" mentioned that most of the people (around 100 million)  who lost jobs during the nationwide lockdown in April- May 2020, were back at work by June 2020 but with depressed incomes. As a result, the labour share of GDP fell by over 5 percentage points from 32.5 per cent in the 2nd quarter of 2019-20 to 27 per cent in the 2nd quarter  of 2020-21. Of the decline in aggregate income, 90 per cent was due to reduction in earnings, while 10 per cent was due to loss of employment, which reveals that though most of the workers were able to go back to their work, they had to settle for much lower wages and earnings.  Due to depressed economic conditions, monthly earnings of workers fell on an average by 17 per cent. The precarious nature of employment,  along with informal forms of employment, increased manifold  and it has been found that nearly half of formal salaried workers moved into informal work. This dismal picture of the economy, the impoverished condition of the common person, is  beyond the pale of the Modi Government/ They refuse to learn from harsh reality, and thus push the country into a deep abyss.

In this regard, an analysis of the e-Shram portal provides interesting findings. The Ministry of Labour and Employment started registering unorganised workers in this portal, e- Shram, from 24  August 2021. With a rate of registration of 15 lakhs per day, registration on this portal crossed 10 crores by 1 December 2021. The Ministry hopes to document 30 crores more registrations within the next couple of months. Out of nearly one crore registered, the social profile of these informal workers shows that 61 per cent falls in the young age group (between 18- 40 years). This predominance of young informal workers is a significant feature of India's informal economy.  Gender wise analysis during the last 13 weeks (before 1 December) shows that out of the total registrations, 52 per cent and 48.6 per cent are male and female respectively. This indicates significant enrolment of women workers. Nearly one in four registrations were reported from  West Bengal (23%), followed by Uttar Pradesh (19 %), Odisha (13%)  and Bihar (11%). All these four states have reported a higher share of total registrations than their share of the total workforce aged 15- 59 years according to the PLFS (periodic labour force survey). Other states have registered less than 2 per cent of their total workforce aged 15- 59 years on average.

Another noteworthy observation is that of the total registered workers in e- Shram, more than 70% belong to SC-ST-OBC categories, and majority are employed in the farm sector. By 25 November 2021, around 53 per cent registered were from the agricultural sector, followed by workers in the manufacturing (13 %) and construction (12%) sectors. We can safely conclude from the mentioned data that till now agriculture is the largest employer;  overwhelming section of young  informal workers belong to the most deprived, neglected social category. Yet, they contribute more than 52-55 per cent of the country's GDP! The National Commission for Enterprises in the Unorganised Sector (NCEUS) estimated that the contribution of this sector to the GDP to about 50 per cent (2008) while 92 per cent of workforce was informal and 8 per cent formal. In 2018-19, as per the latest official statistics, India's informal sector accounted for approximately 52 per cent of its GDP. And this is the tragic irony of India's "development" paradigm; innumerable nameless, faceless informal workers are the main contributors of country's GDP, the real creators of wealth. However, all the economic benefits  are  drained (through the rhetoric of incentives) towards those handful of corporates whose contribution for the  economic well-being of the country is highly questionable!

The available data also revealed that 63 per cent of the workers are in the 18-40 age group. The 'gift' of demographic dividend seems to be highly farcical, since a large section of young and middle-aged people in India earn with low monthly incomes. In an attempt to address the migrant worker crisis, the Supreme Court in its June 2021 judgement had  ordered the Union Government to create a national database of unorganised workers. However, interestingly, as per data reported by early November, less than 3 per cent registered workers reported themselves to be migrant.

The draconian four labour codes have not only snatched all labour rights achieved through struggles and sacrifices of the Indian working class, they have converted workers into new  slaves  and built most regressive labour codes premised on "ease of doing business". Bonanza for the corporates, bullets for the workers: this is the sordid saga of India's development paradigm.  νν