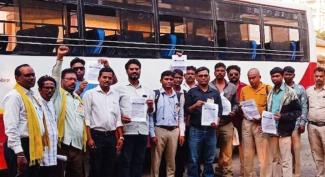 Workers of the Maharashtra State Transport Corporation (MSRTC) are on strike for more than 55 days. They are demanding assimilation in the state government services. MSRTC is known as ST in Maharashtra. The then Bombay provincial government established Mumbai State Transport Corporation in 1948 by nationalizing the then existing private services. After the state of Maharashtra was formed in 1960 the ST expanded the services to the entire state reaching even the remotest villages. This was carried out to fulfill the need of Capitalism at that stage of “Development”. ST fulfilled transportation needs of the workers from rural hinterland to the cities. It also helped in the expansion of the Co-operative capitalism being propagated at that time. Today ST has 250 depots of big and small size at vantage areas catering to 15000 buses. It has 1 lakh employees most of whom are connected with the rural areas.

To free the common people from the exploitation of the private transport owners, to provide the people public transport at affordable fares and to ensure safe travel were the aims for establishing S T. Not profit but providing service to the masses was the motto. Hence the fares have always been kept lower than the actual costs thus providing subsidies to the common travellers. The senior citizens, students and differently abled persons are subsidized to the tune of 250 t0 300 crores per year in the fare. But the inputs like diesel and other consumables are brought at market prices. Toll is paid at the toll plazas. It is burdened with travel and other taxes. ST is in fact the lifeline of the rural Maharashtra. S T means guaranteed service for school and college students, market trips, health checkups, government and other employees. S T has contributed significantly in the development of Maharashtra state. The state government does not provide any concessions to S T for serving the common masses with low fares. During the corona pandemic the lifeline of the city of Mumbai – the local train service was closed. No one can forget that 1000 S T buses plied in Mumbai along with the BEST municipal corporation bus service. Nearly 200 S T employees lost their lives to corona. After the policy of globalization, liberalization and privatization (GLP) was pushed through from 1990-91 the policy about public transport changed and steps were taken in all the sectors of the economy to spread GLP. The Maharashtra state government started to encourage private bus operators widely following these policies. This was operationalized on two levels. GLP benefited the neo middle classes from all castes and they had excess money in their pockets. Their aspirations and expectations rose to new levels. Instead of taking steps to fulfill these expectations and aspirations and earn money like providing luxury buses the government openly encouraged private operators on the lucrative, income/profit generating long haul routes with near full capacity utilization. On the other hand the feeder services in the rural areas were handed over to unregulated, unsafe private vehicle owners who literally cramped passengers much above capacity. The real intention of the state government is to privatize S T. They have already taken the first steps in this direction by introducing lease model buses on the Mumbai –Pune route. The policy is to push people to privately owned transport system. The ruling class and the ruling clans have an eye on the prime land of the S T depots under the new monetization policy. The push towards these policies is provided by the Indian vehicle manufacturers (2 and 4 wheeler manufacturers, Bus manufacturers like Tata, Ashok Leyland) , their foreign partners (Bus manufacturers Volvo, Scania, Mercedes etc.) and the infrastructure sector foreign and Indian corporates.

The economic crisis which started deepening from the demonetization has further intensified in the corona period. This has pushed the the S T which was already reeling under the GLP policy to  the death bed in last one year. Spiraling fuel costs, increase in the prices of machinery and spare parts, lack of resources to buy new buses  and to maintain buses along with the burden of increase in taxes have resulted in increase in the financial burden on S T. S T is expected to bear the losses while fulfilling the social responsibilities, while the government does not provide any subsidy to eliminate the gap thus created. Under the garb of reducing operational expenses the new appointments were made on junior pay scales. This fitted exactly in the GLP policy of huge discrepancies in wages for the same work carried out by 2 sets of employees. Almost 40 % of the S T employees’ fall in the junior scale category today. And this has been one of the main reasons for the unrest. This has been exacerbated by a delay of 2 to 3 months in payment of wages and salaries. Over 40 employees have committed suicides. In all these times the recognized union affiliated to HMS and rival unions from INTUC, Shivsena  either remained collusive or have been plain anti-employees. The explosion of the unrest amongst the S T employees has to be understood in this context. The strike is solely at the initiative of the employees. They have thrown out all the established unions. The government is trying hard to break the strike. More than 10 thousand employees have been suspended and services of 1800 employees have been terminated. Transfers are being resorted to. Police repression is underway. Now the government is preparing to use MESMA.  But the employees have paid no heed to these measures and are steadfast in their demand for absorption in the government service. They see it as the only assurance to a better future and they are in a way right as well.

In the early stages of the strike the B J P leadership actively supported the strike. Thus it was propagated that the strike has been the handiwork of B J P. But when it became clear that the S T employees are unwilling to move even an inch from the demand for absorption it was difficult for B J P , a supporter of privatization ,to stand by them. In a way they became a subject of ridicule and their real face was exposed. But the established unions and the economic policies of the ruling coalition akin to B J P are responsible to enable B J P to occupy the space offered by genuine unrest in the employees.

Today the S T employees are fighting their own battle by creating an grass root organization. The struggle is nearly leaderless so to say. The lawyer, Adv. Gunratn Sadavarte who is helping the employees in the legal work has become their leader. He has guaranteed success through the legal route. Adv. Sadavarte, however, keeps mum on the privatization policies of the state and union governments; He does not utter a word about the changes effected by the union government in the M v Act to allow plying of 6 and 14 seater private vehicles in the reserved operational areas of the S T. Today the S T employees trust him. But in the times to come he will surely be put to test.  All the established political leaders and the media has been threatening that ST employees will face the same consequences as the textile workers. In reality, the ruling class political parties are to be held responsible for the misery of the textile workers. After crushing the textile strike these very people have enabled the corporates to sell the mill lands or mint money by carrying out construction of real estate on that land. These leaders are now threatening the S T employees. The textile workers had taken a political step forward from the trade union struggle and had jolted the then government.

Maharashtra State Sarv Shramik Mahasangh, an AICCTU affiliate, has joined hands with Shashank Rao, an old activist friend and a co-participant in other unions to form the “Sangharsh S T Employees Union”. The union is actively and firmly with the S T employees in their struggle. The S T employees have challenged the government policy in basic services like public transport. We must support them in this challenge. νν