US Tornado Tragedy: How Corporates Push Workers to Death for Profit 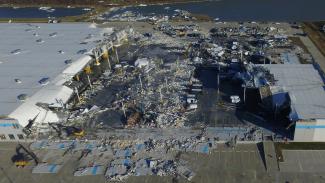 On December 10, a series tornado struck across six US states, killing more than 80 people. It left a trail of death and destruction behind its path, with hundreds of homes and structure razed to ground. Amid the calamity, when everyone was looking for their safety, corporates were trying to churn profits. Among the killed were several factory workers including those working at Amazon ware house in Illinois and a candle factory in Mayfield.

Death of workers at Amazon warehouse in Illinois

Six workers at an Amazon warehouse in Illinois (United States) were killed in the tornado which had led to collapse of the warehouse. According to various reports and worker testimonies, the warehouse management ignored the initial tornado warnings and refused to stop work until it was too late. Furthermore, the warehouse workers had little or no training at all to deal with such emergencies.

Larry Virden, one of the six workers killed in the incident messaged his partner Cherie Jones few minutes before the tragedy and told that the company won’t allow them to leave.

He leaves behind four children.

The deaths in Amazon warehouse have once again put spotlight on the horrific labour practices carried out by the global e-commerce platform owned by Jeff Bezoz.

“This incident calls into question so much of Amazon’s practices in their warehouses,” said Marcos Ceniceros, an organizer at Warehouse Workers for Justice. “This is not the first time we’ve seen workers suffer at Amazon and we want to make sure that they’re not continuing to cut corners and putting workers at risk.”

At Candle factory in Mayfield

A similar but more tragic story is coming out of Mayfield Consumer Products candle factory in Mayfield. The corporate’ lust for profit led to death of 8 workers as the company bosses warned anyone leaving the shift will be fired from the job.

One of the factory worker, 21 year old McKayla Emery said that supervisors and team leaders told employees that leaving would probably jeopardize their jobs. “If you leave, you’re more than likely to be fired,” Emery said she overheard managers tell four workers standing near her who wanted to leave. “I heard that with my own ears.”

“I asked to leave and they told me I’d be fired,” said another worker Elijah Johnson. “Even with the weather like this, you’re still going to fire me?” he asked.

Companies like Amazon, Mayfield Consumer Products and others strive of such unfair and toxic work culture that put productivity pressures (targets) on the workers to ensure that company profits continue to soar, even at the cost of lives of workers. νν