Steel Workers Gear up for One Day Strike 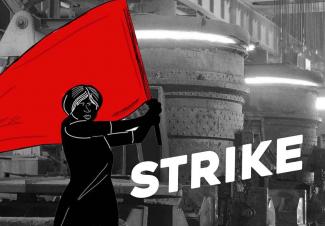 The stage is all set for one day strike in all units of SAIL (Steel Authority of India Ltd) on 6th May 2021 on the demand of pay revision. All the unions affiliated to central trade unions, namely CITU, AITUC, HMS and AICCTU have already served strike notices to the management. Notices have been served in mines also. So far as INTUC is concerned, it has not served strike notices in steel plants in Bokaro, Bhilai and Durgapur, but has served the notice in Rourkela, Vishakhapattanam and Alloy Steel Plant, Chandrapur. The main demand is pay revision which is pending since 2017. Some non-NJCS (non-recognized) unions have also served strike notices and the workers' mood is clearly in favour of the strike. All the unions affiliated to AICCTU operating in Bokaro, Bhillai and Raurkela have served strike notices and are fully ready for the strike on 6th of May.

BMS is the only exception which has served a separate notice for one day strike on 3rd May, obviously to subvert the 6th May strike. In Raurkela, a few non- NJCS unions have rallied behind BMS. It goes without saying that all the left trade unions including AICCTU are firm on making 6th may strike a grand success.

It should be noted here that in BSL (Bokaro) two local unions took initiative to raise the issue and gave a call of strike that was to be held on 13-14th April. A few non-NJCS unions, including our union, supported the same. But considering the question of broader workers' unity and some other circumstantial factors, they have decided to defer their date and synchronized it with the call for 6th May.

As we are aware, the last pay revision in steel sector took place in the year 2012 for a period of 5 years.  So, the demand for next pay revision was in the air since 2017 itself. The management was not at all interested for the same and started creating confusions and putting obstructions. On the one hand, they insisted for extending the period for upcoming pay revision from 5 years to 10 years.  They were also successful in dividing the trade unions on this question. On the other hand, SAIL introduced an affordability clause, according to which earning profit for three consecutive years by the company was made a pre-condition for any wage revision. But even after fulfilling this condition, it is obstructing the smooth process of pay revision under some false pleas. Unions are willing for a 5 years wage agreement, 15% minimum guarantee benefit and 35% perk.  They are demanding payment of total benefits in one go and 9% contribution by the management in pension fund. On all these questions, the management has adopted a very rigid position.

As a result, the NJCS (National Joint Committee for Steel) meeting held on 23rd of April failed. In short, let alone discharging its corporate social responsibility,SAIL is not even willing to discharge its responsibility towards its own workers and employees. In such a situation, the call for strike is very much valid and justified because it is nothing but a logical culmination of the entire process.

The workers mood can be assessed from the fact that a good number of new and predominantly young permanent workers of Bhilai Steel Plant spontaneously (i.e. not under the direct or indirect guidance of any trade unions) went on a lightning strike on the night of 23rd April to express their dissatisfaction over the failure of NJCS meet. Their demand included Rs. 50,000 Corona insurance coverage for every worker and guaranteed employment to the dependent, in case of death of any employee due to the pandemic. However, their main demand is related to revision of pay structure. Altogether the 5 plants including the URM, BRM, Blast Furnace 8 etc., remained completely shut down. A few more plants were also partially affected during the first spontaneous strike. This is a second such spontaneous strike in the month of April there. The first one was on 3rd April. Even the workers of mines organized such spontaneous strike on 6th of April.

All these developments clearly show that the steel workers in the country are in a mood of restlessness and a new phase of their resistance struggles against injustice by the management has already begun. AICCTU must get prepared to play its role during this phase.