Release Julian Assange! Journalism Is Not a Crime! 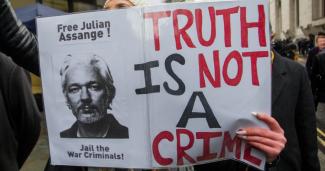 On April 20, a UK court sanctioned the extradition of Journalist, activist and founder of Wikileaks Julian Assange to the United States. He is facing espionage charges in the US for exposing the war crimes committed by American troops in Iraq and Afghanistan. Assange faces a possible jail term upto 175 years if extradited to the US.

WikiLeaks played a vital role in exposing the acts of war crimes, crimes against humanity and corruptions committed by various state actors. Between 2006 and 2009, WikiLeaks published a series of important documents that contained revelations such as the membership list of the fascist British National Party (2008), the Petrogate oil scandal in Peru (2009), and a report on the US-Israeli cyber-attack on Iranian nuclear energy facilities (2009). One of the biggest contributions of Wikileaks had been to publish large numbers of classified documents and videos pertaining to the US invasion of Iraq and Afghanistan, known as the Iraq War Logs and the Afghan War Diaries.

In 2010, Wikileaks published a large tranche of documents and videos sent by the Chelsea Manning, a US Army intelligence analyst who downloaded hundreds of documents from the US government servers. The document also contained a chilling 39 minutes of gunsight footage of the 2007 US airstrike in Baghdad. The video, titled Collateral Murder, showed the airmen opening fire at civilians from their gunship and, then laughing at some of the casualties. This claimed lives of more than 12 people, including two Reuters journalists.

Manning was arrested in 2010 and convicted for various charges including espionage. She was later released in 2017. Assange spent 9 years inside the Ecuadorian Embassy in the UK as an asylum seeker, but was arrested in 2019. Though an earlier attempt by the US for his extradition was rejected by a UK district court stating that doing so would be "oppressive" given concerns over Assange's mental health and risk of suicide. Later in 2021, the High Court in London ruled that Assange could be extradited to the US to face the charges and in March 2022 the UK Supreme Court refused Assange permission to appeal.

Wikileaks also has an extensive cache of classified diplomatic cables that exposes the crimes committed by Indian forces in Kashmir and also increasing intervention by the US in the internal affairs and policy circles of India.

With its work WikiLeaks has established its enduring place in history by exploding the myth that imperialist wars were being fought for democracy. WikiLeaks and Assange paved the way for strengthening the field of investigative journalism, and building an international opinion against wrongdoings done by state actors.

The witch-hunting of Assange by the US is because he and Wikileaks exposed the imperialist crimes. It is important to stand with Assange who had put everything on stake - his life and freedom - so that the grim truth about an unjust war could be told. ν