WFTU solidarity message with the general strike in India 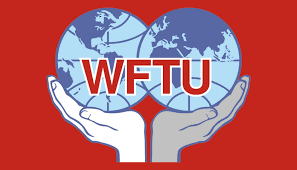 The international class-oriented trade union movement, the 105 million workers who join the ranks of the WFTU, fully stand on the side of the workers of India who are prepared for another great Two Days’ Countrywide General Strike against the anti-worker, anti-people, anti-national Policies of the Indian Govt. on March 28-29, 2022.

We are following the intensification of the trade union struggle in India in the last period with conventions, strikes, rallies, and manifestations in every state and sector in view of the Countrywide General Strike which constitute the culmination of this long fight.

It has been proven in practice that the massive, militant, and decisive struggle brings results. The workers and the people of India proved it on numerous occasions in the past. The farmers of India have recently confirmed it once again with their relentless fight and the firm solidarity by the working class and the entire trade union movement.

We call upon the workers and the popular strata in India to work for the success of the Countrywide General Strike which is organized on the occasion of the second phase of the Budget Session of Parliament.  Only the people of India can save India, only the workers can save themselves from the destructive and anti-worker Modi's policy and the capitalist exploitation.

The World Federation of Trade Unions congratulates its affiliates for their leading role in the decision, the preparation, and the realization of the General Strike as well as for all the massive and militant initiatives they organized during the last months spreading out the message and the demand of the Indian trade union movement.

The WFTU joins its voice with the trade union movement and the working class of India, demanding the full implementation of their just demands.  We strongly condemn the unacceptable, anti-people policy of the Indian government, demanding the immediate and unconditional withdrawal of the labour codes and the privatization plans of national assets.

There is no other way for the popular strata to follow but the path of dignity and class unity; the path paved with the struggles and the blood of the heroic working class of India all these years.  The path that led to the previous massive and militant strikes that inspired the working people all over the world and reminded the bourgeoisie that the real power is in the hands of those who produce everything and have nothing to lose but their chains.