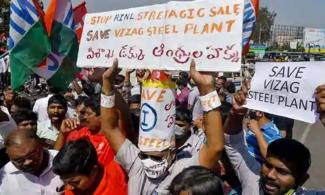 The strike by steel workers, on 30th June 2021, was a great success, on every count, in all plants as well as in related mining areas in the country. The strike was organized to press for the demands of conclusion of long pending wage revision and withdrawal of the policy of disinvestment and privatisation in Steel sector. Despite SAIL being the first PSU to fulfil oxygen needs of the country in the period of pandemic crisis. The Modi government, on the one hand, is denying workers their rights and hard earned income, and on the other, is shamelessly converting the 'crisis into an opportunity' for its corporate friends, by privatising the Steel, Rail and other PSUs and by selling national resources to private players. So, the strike was a befitting response to the pro-corporate, anti-worker policies of the Modi led BJP government.

The participation of workers in this strike varied between 75 percent to 100 percent in various units of SAIL with many plants like Bokaro, Rourkela, Salem, CMO Kolkata, Vizag among others and mines like Rajhara, Nandini registered 100% strike. The production was almost zero. The young and new permanent workers played a leading role in organising the strike in many plants, and contract workers too participated in big numbers, despite not being covered under the purview of pay revision in steel industry.

The administrative highhandedness was, in most cases, effectively countered by the striking workers. All  efforts by the managements to divide trade unions, harass and terrorize  workers through punitive actions, lathi-charge etc., were completely beaten back by the historical unity and firm actions of workers.

In Bokaro steel plant, a section of officers managed to melt some steel in a blast furnace. But, when they attempted to dispatch the same to some other shops, thousands of workers obstructed it by blocking the rails, inside the premises, at least, for five hours. In Bhilai steel plant, police force resorted to lathi-charge in one of the factory gates to disperse workers assembled in the night shift. Workers put up a united resistance and forced the cops to retreat.

AICCTU condemned the role of local administration, management and police of causing illegal disruption of strike in several plants using violent actions including lathi-charge on striking workers. AICCTU also condemned the adamant, anti-worker attitude of the Modi government and the SAIL management on the issue of pay revision and other demands. The government and the management refused to learn their lesson even after a successful strike.

The strike was disrupted by INTUC affiliated unions too. The directive of their central leadership tried to create confusion about the strike. In BSP (Bhilai), INTUC did actually withdrew the strike call, just two days before. But in Bokaro, a large number of young workers angrily protested the decision of their leadership and ransacked the INTUC office. The Bokaro unit leadership of INTUC was successfully forced by workers from below to continue with the strike call. These young workers, rallied under the banner of ‘Bokaro Diploma Holder Workers Union’ played a very effective and militant role on the day of the strike.

AICCTU affiliated unions in steel sector played an effective and determined role in organizing the strike. The experience of this strike underlines that a special attention should be paid to organise the youth section of steel workers in their respective plants, apart from organizing contract workers who are actually shouldering the brunt of government’s policies of privatization and contractorizaton.

Lastly, it is worth mentioning here that the decision to defer the strike, from 6th May to 30th June 2021, by workers and trade unions, in the interest of uninterrupted oxygen supply for the treatment of Covid patients, was widely appreciated.