A Study by Working People’s Coalition: 95% of Delhi Workers Do Not Get Minimum Wages! 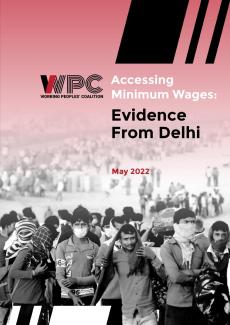 A latest study by the Working People’s Coalition (WPC) has revealed that 95% of Delhi workers do not get statutory minimum wages. The stark reality that is staring on the governments and the civil society for quite long is substantiated by statistics now. The statistics reveals an outrageous scenario.

A Rule Rather Than an Exception

The ground reality in the very heart of the capital of the country, Delhi, is brought out by a report of the WPC on access to minimum wages based on a survey of 1,076 workers across four clusters—domestic, construction, industrial and security guards, carried out in Jan-Feb, 2022.  WPC study states the obvious truth that 95 percent of workers in Delhi are not paid statutory minimum wages even when existing labour laws are in force.

The Minimum Wages Act, 1948, which governs the legal framework for the payment of legally mandated minimum wages, has practically very little compliance in the National Capital Territory of Delhi (NCTD). Seldom does an inspector visit any factory, now a days, to check the compliance. The workers, who are forced to overwork throughout the extreme weather conditions of Delhi, in the ill maintained sweat shops of Okla, Bawana, Wazirpur industrial areas and a dozen other big and small industrial areas of the city, are still longing for a basic compliance of minimum wages.

Half-paid, they are forced to live a life in slums devoid of any dignity, deprived of bare minimum, basic infrastructure and amenities like water, road and sanitation. The majority of the working class living in slums are under persistent threat of eviction both from their jobs and also from the place of their residence. The basic industrial safety at place of work has become a rare commodity and industrial accidents have become very regular. These are just glimpses of what workers of Delhi, mostly migrants, go through day in and day out. The study also brings out that 90 percent of sample respondent are not aware about their social security rights.

Delhi encompasses more than 5 million strong workforce at a conservative estimate and most of whom are unorganized and also employed in informal sector. Even if the employment is in an organized and formal sector, it’s likely to be based on a contractual, casual or any other irregular form of relationship. Even if the work is of perennial nature, the workers are employed on contractual basis. These are violations of the Contract Labour (Regulation and Abolition) Act, 1969 (CLARA) in letter and spirit. The employers shrug off their mandatory responsibilities simply by not showing them on rolls. This reduces scope for the unity and bargaining power of the workforce. In case, if they decide to unionize, it’s likely that they will be shown the doors at the first hint of it.  The study also brings this out when it states that only 28% of workers amongst the respondents are in the permanent category and the remaining are either working as contractual or daily wage workers i.e., 19% and 30% respectively. Across types of employment, the share of daily wage workers is higher, followed by permanent workers and contractual workers

It is evident that the consecutive governments in power in the NCTD have allowed such violations to continue. Implementing the Minimum Wages Act on ground has never been on the agenda of the governments. Most of the workers in Delhi would be getting only 50 to 75 percent of mandated wages. Payment of overtime at double the normal rate is an exception rather than a rule even when majority of the workforce end up working for more than 8 hours.

But this is rarely paid despite being mandated under the Minimum Wages Act, 1948. The study of Working People Coalition reveals that 95 of workers are not paid minimum wages notified by the Delhi government despite having required set of skills. The study says that over 75% of workers work without sufficient facilities or security.

Although the Delhi government’s step of fixing minimum wages as per the recommendations of 15th ILC 1957 is a welcome step, but with this absurdly low level of compliance of mandated minimum wages, the announcement remains only on paper and doesn’t make any difference to the actual living conditions of millions of workers of Delhi.

A well-designed minimum wage system can be a strong tool for protecting workers and alleviating poverty. The study points out that high rate of noncompliance not only negatively affect the workers and their families, but also ensure impunity to employers who continue to violate the law and exploit workers. It states that ensuring minimum wage compliance is not only a matter of putting in place a well-equipped system of inspection, rather, an improved compliance depends on the effectiveness of the entire process of designing and implementing minimum wage policies, starting from the determination of the right level and rate structure in consultation with the employers’ and workers’ organizations (RANI, et al., 2013).  The study recommends universal coverage of minimum wages, regular adjustment, information and awareness, grievance redressal, implementation of urban employment guarantee scheme along the lines of MGNREGA, effective penalties for non-compliance, involvement of workers organization and unions and collective bargaining for increased compliance of the minimum wages act. It points out that the Supreme Court in Bandhua Mukhti Morcha case has stated that non-payment of minimum wages is an indicator of work being in nature of bonded labour. The Bonded Labour Act which makes it a criminal offence should be deployed, if required, to ensure compliance with Minimum wages.

It also points out that the new Wage Code, which would replace four acts - Minimum Wages Act, 1948; Payment of Wages Act, 1936; Payment of Bonus Act, 1965; and Equal Remuneration Act, 1976 - despite its claim of coverage for all, has a range of challenges and gaps, including lack of consultation mechanism to consult stake-holders in the process of fixing minimum wages, evidence-based adjustments that take into account the needs of workers and their families, economic factors and measures to improve the implementation.

In such a scenario, the need of the hour is to acknowledge and recognize the rights of workers and ensure their enforcement. What the Modi government has done, instead, is to do away with the existing labour laws. All labour laws have been replaced by four Labour Codes. These codes not only exclude a huge majority of workers from the arena of legal protection but they also give more freedom to companies/employers to violate the labour laws.

The way forward is to strengthen the movement of the working class to ensure the enforcement of workers’ rights.