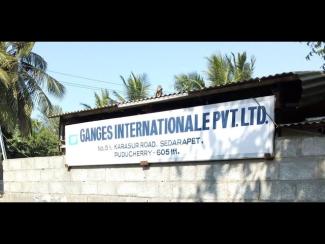 Migrant workers of the biggest industrial estate in Puducherry, Sederapet, have been demanding various industries in the estate to improve working conditions and to adhere to the regulations regarding health and safety. A recent tragic accident, where a worker Ajbar Malik died while working for a company called Ganges Internationale, as a result of the company’s negligence, was the point of trigger for the subsequent workers’ outburst and for the current ongoing struggles. While targeting fire against the industries, the protesters also pointed out that the present Puducherry state government led by the BJP and the NR Congress is also complicit with the companies as they are silent on the gross negligence on the part of the company that led to such a tragic incident.

Ganges Internationale is an ISO 9001:2015 certified telecom tower manufacturer and has a big factory at the Sedarapet Industrial Estate in Puducherry. It also manages a galvanizing unit within the same premises.  These two factories employ a small number of permanent workers, including the managerial staff but around 3000 migrant workers, mainly from West Bengal, alleged to be on the rolls of the contractor. These workers are engaged in the core production processes, and are employed on a contractual basis by the company. There are multiple illegalities involved here. First and foremost is that the workers engaged in core production processes should not be employed on a contractual basis. Secondly, the company also employs juvenile workers.

Industrial safety measures are rarely followed on the shop floor and hence the operations are dangerous and working conditions are appalling. Workers are forced to work in shifts of 12-14 hours without weekly holidays. All migrant workers are forced to live within the factory compound in poor living conditions. They are forced to sleep in low-roof bunker beds. Statutory holidays like national and festival holidays as well as casual and earned leave benefits are also denied to the workers. Even though the factory started operations 25 years ago, there is no organized union fighting for the welfare of the workers until now.

It is these conditions that led to the tragic and avoidable death of Ajbar Malik. On 22 October this year, Malik, who hails from Inayat Nagar in 24 Parganas district of West Bengal, was operating a poorly maintained rope crane in the flat parts unit of Ganges Internationale. He was not trained to operate this crane. The crane was moving in a narrow lane with a load of 750 kg when the boom rope got torn off and its entire load of steel angles fell on Malik’s head. He died instantly as a result of this horrific incident.

After Malik’s death, the management of the company tried to hush up the horrific incident. The workers, therefore, protested against this, and informed the local police about Malik’s death. Subsequently, the police entered the factory and removed Malik’s body from the premises without observing due process of law. The workers gathered in the factory objected to this and demanded justice. The police then resorted to lathi charge of the workers. The situation turned volatile as workers resisted the police. Workers as well as some policemen were injured. All this happened because of the mishandling of situation by the company management and the police.

On hearing of these developments, AICCTU state president S. Motilal, who was also the president of the Sedarapet Industrial Estate All Trade Unions and Workers Federation, rushed to the factory. The police registered cases under various sections of the IPC (including attempt to murder - IPC 307) against 28 workers, some of whom are juveniles. These workers were arrested and sent to judicial custody. On the other hand, the police registered just two cases in relation to Ajbar’s Malik’s death; one against an employee of the company and another against a contractor, under section 304(A) of IPC (involuntary manslaughter and death by negligence) instead of 304 (ii) (applicable when harm is caused when there is prior knowledge that a particular act can cause death). Following the accident, the Labour Department stopped production operations at Ganges International and its sister concerns. However, permission to restart production was given a week later, even though working conditions remained unsafe. In fact, yet another accident took place in the same factory after restarting operations. A worker from Odisha got seriously injured in this accident.

CPI(ML), CPI(M) and CPI jointly issued a statement condemning the callous attitude of the company management towards its workers and also the inaction of the NR Congress-BJP led Puducherry government. The left Parties also demanded a compensation of Rs 50 lakhs to the family members of the deceased. Comrade S. Balasubramanian, AICCTU All India Vice President stood surety to all juvenile workers when they were released from the special observation home. AICCTU held a demonstration on 2nd November in front of the district magistrate’s office, demanding strict implementation of labour laws and invoking of Section 304(ii) of IPC against the Directors of Ganges Internationale for the crimes committed which led to Ajbar Malik’s death. All the Central Trade unions (AICCTU, AITUC, CITU, LLF, MLF, AIUTUC) organised a joint demonstration in front of the Labor Commissioner’s Office on 9th November condemning the utter failure of the management to  implement all the safety rules under the Factories Act and other Labour Welfare Acts. The demonstrators also criticized the police for playing into the hands of the company.