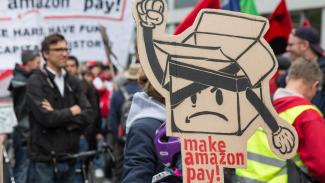 Amazon workers along with other unions organized series of "Make Amazon Pay" protests in the United States, South Africa, Brazil and across Europe on November 26 (Black Friday) against the inhuman working conditions, company’s exploitative practices and union busting activities.

In Germany, around 2,500 employees went on a strike at Amazon shipping centers in Rheinberg, Koblenz and Graben. Meanwhile in Brazil, Dockers and union members took part in a global protest with a banner reading 'Make Amazon Pay' against Amazon, in downtown Santos, Sao Paulo state. Meanwhile in South Africa, civil society groups protested against an upcoming Amazon facility in River Club, Cape Town.

In the US, Amazon workers, marched to company founder Jeff Bezos‘ Flatiron district residence as a part of the global protest action.

Amazon, the global online platform and its founder Jeffrey Bezos have been striding on profits made through highly exploitative practices. The net worth of Bezos is US$205 billion and in terms of the salary, Bezos gets 58 times more than a worker in the company.

Amazon has been deploying surveillance tactics against employees to prevent attempts of unionization.  Last year, the company fired a warehouse worker who organized Staten Island (US) protest against the prevailing unfair working conditions amid the raging COVID-19 pandemic.

Recently, in the US State of Alabama, the National Labor Relations Board official has ordered a second union election at an Amazon facility in Bessemer after finding that the tech giant interfered and violated workers’ labor rights during a union drive.

The company’s facilities have been termed as ‘prisons’, with the crippling and constant pressure to meet deadlines and punishing goals. Workers are forced to urinate into trash cans and water bottles to save time.

In India, Amazon engages in similar exploitative practices in its facilities, with less pay and mandatory overtime. Workers are forced to work for long hours with insufficient rest and bathroom breaks as company puts the pressure to meet the ‘target.’ Furthermore, on March 15, Amazon introduced a new policy saying that the delivery staff would earn INR 10 on delivering small packages and INR 15 for deliveries made through tempos. The staff was earlier getting INR 35 on each orders.

The All India Central Council of Trade Unions (AICCTU) stands in solidarity with Amazon workers in India and across the world in their struggle against the unfair labour practices and appalling working conditions at the company’s warehouses and facilities. We demand an immediate end to union busting activities by the company.