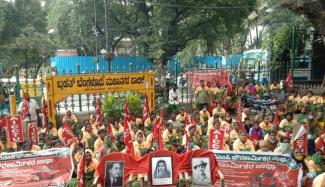 The Propaganda March of Sanitation Workers

Sanitation work is a dehumanising occupation and is one that is reserved for the Dalit community across the country. Sanitation workers are not merely individual members of this workforce out of pure choice; but members, by birth, with inerasable identity and inter-generational continuity. Most sanitation workers are women, and are victims of triple oppression, by virtue of their class, caste and gender.

The caste system has blended with the neo-liberal agenda of the state to create highly insecure conditions of work for sanitation workers refusing to treat them as permanent workers despite having worked for several decades.

In Karnataka, after years of struggle, the contract system was abolished, all contractors were removed. The workers employed are being paid directly by the local body administration of the state. However, they have still not been made permanent and are only paid minimum wages. Despite working throughout both the lockdowns, with grave risk to themselves, they were not provided even a risk allowance. They are not provided basic amenities like drinking water, toilets and rest rooms. Workers are subjected to various forms of untouchability practices – not being permitted to touch the gate of houses, being denied drinking water or provided drinking water from bathroom mugs, etc.

During the period of the lockdown, workers were forced to walk several kilometres to work everyday due to the lack of transport, and had worked throughout the day, without any food to eat or even water to drink. They worked at grave risk to their health, picking up the waste from homes where those who were infected by COVID-19 stayed in isolation. Instead of taking steps to ensure safe and dignified working conditions to sanitation workers, the Prime Minster took to theatrics during COVID-19 and asked people to bang thalis and light candles for the sake of frontline workers. Pots were banged but powrakarmikas (sanitation workers) continue to work under vulnerable conditions.

To highlight the vulnerable conditions under which powrakarmikas are forced to work and to demand dignified working conditions, the BBMP Powrakarmika Sangha (affiliated to AICCTU) started a Jaatha (propaganda march) across the city of Bengaluru from 9th October 2021.

The Jaatha was inaugurated by Com. Ravanamma, a senior leader of the union, who retired as a powrakarmika last year and who has been at the forefront for the rights of powrakarmikas from the beginning.

The Jaatha consisting of activists of sanitation workers went around the city of Bengaluru for three weeks highlighting the failures of the state government and demanding dignified and safe working conditions.

It demanded dignified and safe working conditions, all powrakarmikas be made permanent and be paid wages of a minimum of Rs. 35,000/. The work performed by sanitation workers is caste ordained, done primarily by Dalit women, who are regularly subjected to caste atrocities and sexual violence. The Jaatha demanded an immediate end to such caste based atrocities and sexual violence of all forms. The Jaatha demanded that the Municipal Corporation ensure the provision of housing to all and education to all their children, in order to ensure that they are not forced to enter this caste-ordained work.

The Jaatha started at 4 am, moved with powrakarmikas to the muster where their attendance was marked, generally, at 6 am. Workers are not provided any form of transportation and are forced to either walk the distance or come through auto rickshaws in large numbers, an unsafe mode of transport. Meetings were held at 6 am, 10.30 am and 2 pm when workers congregate for attendance. In between, the Jaatha moved through the streets and markets. Several people came forward expressing their solidarity to the demands of the sanitation workers and said that they would stand with the workers who protected their health. Workers spoke of the difficulties faced by them – waking up everyday at 3 am to prepare food for their families, leaving for work by 4.30 – 5 am and working upto 2 pm. “We work everyday without a single day off – whether it is Sunday or a festival or a national holiday. We even work on Ambedkar Jayanthi. What do they think of us – are we people or just hands and legs”, workers spoke. They spoke of the harassment faced by them from their superiors, officials and the public. They spoke of the untouchability practices that they are subjected to and demanded action against those practicing it.

In the evening, the Jaatha came to the homes of powrakarmikas. The BBMP Powrakarmika Sangha has bought a film dedicated to those workers who lost their lives to COVID-19, on the condition of powrakarmikas during the COVID-19 lockdown. Director Raju who works as a powrakarmika and directs short films, made a film on the Inauguration ceremony and the Jaatha. Both these films were screened at the houses of the powrakarmikas and followed by a discussion. Powrakarmikas are forced to live under extremely vulnerable conditions – several of them live in tarpaulin sheds without any proper toilet facilities. They are denied even basic water facilities and when it rains, the sheds are steeped in mud. The inequalities in the country, which are at an all time high, is starkly seen through the housing inequality. Powrakramikas are forced to live without the most basic amenities, being surrounded by sky scrapers. Through the Jaatha, powrakarmikas demanded that the state fulfill its constitutional obligation and ensure the provision of dignified housing to all powrakarmikas.

Protests were held before the offices of zonal level officers demanding that the rights of powrakarmikas to dignified working conditions be immediately met. Slogans of “Respect and Dignity is Our Right, We Will Take It”, “Treat Us as Permanent Workers, Ensure Wages of Rs. 35,000/- Every Month”, “Ensure Dignified Working and Living Conditions to Powrakarmikas” reverberated in the air.

The vulnerable working conditions of powrakarmikas are a clear example of the way in which the caste system, patriarchy and the neo-liberal agenda of the state has condemned a historically oppressed community into a caste-ordained profession and pushed an entire community of people into a cycle of poverty. The Jaatha has put forth a clear message against such structures of violence demanding what is rightfully due to the powrakarmikas.  ν