Erosion of Women’s Independence and Autonomy in Lockdown 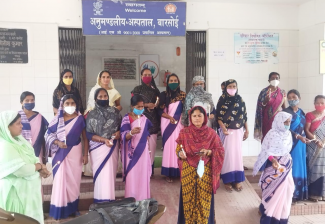 The successive lockdowns in India have caused massive sufferings for the lives and livelihood of India’s working class and the poor. As the government continues to fail in controlling the pandemic and saving lives, ill planned lockdowns, without caring for the livelihood, food security and medical attention for vast majority of Indians, are being imposed time and again. The lockdown has differential impact for different sections of the society. It has been implemented in such a way that it has increased economic inequality and pushed more people down below poverty line. It has further dehumanised the dalits and marginalised sections of the populace. Targeting the Muslims have also increased in the garb of lockdown. And women have been systematically pushed behind. In the present article, we will discuss about the specific impact of the lockdown on women’s employment and autonomy.

Gender inequality and marginalisation of women and other oppressed genders is a crude reality of our patriarchal and male chauvinist society. Subjugation of women is a social norm that has been upheld and further bolstered under the present regime. Modi led BJP government is attempting to institutionalise Manuvad norms for our women in the society by enacting various legislations. Historically, the weapons of women’s oppression have been non-recognition of their labour, denial of equal opportunity for women to participate in economically remunerative activities, limiting them in domestic sphere and attack on their right to make decisions for their own lives. The lockdown has intensified all the tools of oppression on women.

Along with the all-encompassing economic distress in lockdown, power dynamics at home has created added burden for the women members of the family due to increased hours of home stay for all. Several reports have pointed out manifold increase in domestic violence and abuse against women all over the world as well as in India.

Before going into the specific impact of the lockdown on women, it must be remembered that India has been facing consistent increase in overall unemployment and gender gap in employment for last few years, especially since 2014. Data from Periodic Labour Force Survey had shown that unemployment rate in India had reached a 45 years peak in 2017. The PLFS data set also shows 71% of Indian men aged above 15 years are a part of the workforce and only 23% women are engaged as workforce.

When the situation at the employment front was already very grim, the lockdown came as a bolt, destroying livelihood for millions of Indians. Based on CMIE-CPHS data, the State of Working India 2021 report by Azim Premji University has shown that around 100 million Indians lost jobs in the April-May 2020 Lockdown. Even after the lockdown was over, 15 million workers could not return to job even in late 2020.

The job loss that women faced due to lockdown was much higher than men. The State of Working India report by Azim Premji University on the year of Covid 19 Lockdown shows that 61% men were largely unaffected by Lockdown in terms of employment. Among women, the share is merely 19%. After lockdown 7% of the affected men could not recover from unemployment, but among women, the same number was a whopping 47%. This clearly indicates that the women are being made to shoulder major burden of unemployment.

The gendered social role that devalues women’s labour has had clear impact on the disproportionate burden of adverse impacts of lockdown on women. Let us look at it more specifically.

Women constitute a major proportion of frontline workers like ASHA, Anganwadi, ANM, Mid Day Meal cooks, nurses and school teachers distributing ration, medical and other services. Their engagements in the most essential works make them more vulnerable to getting infected. But all these workers are not even accorded bare, minimum legal rights as ‘workers’. All the scheme workers are forced to work with petty honorarium. They are not recognised as workers and not provided the legal minimum wages or the benefits of social securities. Gender plays a major role in such blatant non-recognition of the labour of the scheme workers. Women, thus, by joining the workforce under various schemes, take an extra risk to attain economic independence, but their labour is devalued even in their workplace.

Other than essential works, women constitute major proportion of the labour force in hotel and hospitality businesses, wholesale and retail trade and in labour-intensive manufacturing sectors. Globally, these are the industries that were the hardest hit due to the lockdown (Kabeer, Razavi and Rodgers, 2021).

The gendered impact of the lockdown on unemployment and economic vulnerability is as clear as a crystal. In a country like India that has one of the largest gender gap in social and economic well being in the world, the disproportionate burden of the lockdown on women has to be made a political agenda for action. Until and unless the specific impact of the lockdown on women and marginalized genders are recognised by the government and policy makers, any attempt to recover from the lockdown shock is going to be futile. The present political dispensation sitting at the centre has no intention to respect women’s existence as equal citizens. It is under their watch that attack on women’s autonomy, educational and economic rights have been intensified. It is the workers’ and women’s movement that must recognise the task and intensify the battle for equal rights for women. The organised intervention of the scheme workers in raising their voice against injustice being meted out to them has been a source of inspiration for the worker’s movement. Intensifying the struggle against anti worker wage codes, informalisation of labour and gender inequality in labour market, thus remains a major task of the day. π