Save Industry Day in Assam 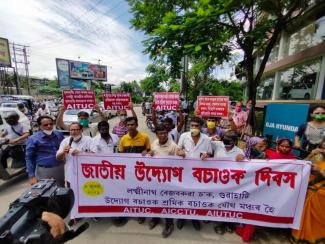 Save Industry Day stressed on the urgency to save Nagaon & Cachar paper mills from sale, Namrup Fertilizer corporation and Silghat Jute mill from closure, power sector from privatisation and the interests of airport workers after Adani’s takeover. The campaign expressed solidarity with the jobless and salary-less workers of Apollo spin mills and J&C paper mills and also expressed rage and condolence at the untimely death of workers. The workers are driven to suicides or allowed to die without treatment.

The SISW JAC criticised the Himanta Biswa Sarma led BJP state government that it openly refused to keep up its election promise of reopening both the spinning mills and paper mills and also resolved to build a national people’s movement to save the industries. Thousands of workers from almost all districts of Assam – right from Barak valley to Brahmaputra - and all sectors observed the Save Industry Day.

Following the continuous anti-worker offensives and closure of industries under the BJP rule, both at the centre and the state, AICCTU initiated and formed the Save Industry Save Worker Joint Action Committee in 2019.