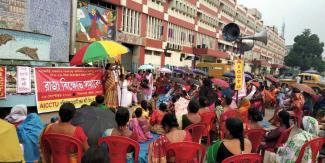 Hundreds of mid-day meal workers held demonstration under Paschim Banga Sangrami Randhankarmi Union and Nadia Jela Sangrami Mid-day Meal Union, both affiliated to AICCTU, at Dharamtala in Kolkata on 7 and 8 June against the continued neglect of their demands by the state government. More than 500 workers participated in the demonstration.

The protest demanded increase in honorarium, recognition of workers’ rights, legal minimum wages for the entire year and guarantee of social security for the workers.

Amidst the scorching heat of the summer, workers from different districts of the state assembled at Kolkata. Leaders of both the unions Mina Paul, Jayashree Das, Krishna Gopal Das and China Shaikh addressed the protesters. They expressed the anger and resentment of the mid-day meal workers of the state and stated that the West Bengal is one of the states where the situation of scheme workers is the worst in the country. The government of West Bengal is completely shying away from fulfilling its duty of ensuring basic minimum rights of the scheme workers. The honorarium for the scheme workers has not been increased for the last ten years. The workers have been raising their voice for long but the government has been humiliating them by completely ignoring their demands.

Leaders of several other unions also participated in the protest and expressed their solidarity with the movement. Madhumita Chatterjee from CITU, Prabir Mishra from Swaraj India, Shyamal Ram from AIUTUC and Anuradha Deb from PDS movement spoke in the protest. AICCTU leaders Atanu Chakrabarty and Nabendu Dasgupta also addressed.