The Struggle of Daily Wage Workers For Regularisation in NEHU, Shillong . 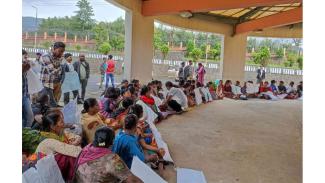 Around 504 casual workers of North Eastern Hill University, of both Shillong and Tura campuses, have begun their struggle for regularisation and to guarantee other rights of workers under the banner of All NEHU Workers Union (ANWU). They formed their union on 29th April this year, after being denied of their right to secure a permanent position in the University.

The casual workers form the bedstone of functioning of the University. They are entrusted with multiple jobs at different places and departments of the University - from the VC Office to the Examination block to the Central Library. Despite the fact that they have been working in the university for more than a decade now and provide the most basic services, the University administration has been conveniently denying to implement their legal rights. They continue to work under the threat of being terminated every day. To fight back the present situation, the workers formed their union and started the struggle.

The Union of the workers have submitted their Charter of Demand to the Office of the Vice Chancellor, Prof Prabha Shankar Shukla. Their demands are as following-

3. The workers are presently being paid less than minimum wages. However, their wages are not according to latest minimum wage rate declared by the government. The minimum wage must be paid along with pending arrears.

4. As the nature of jobs remain same as the regular workers, the Equal Pay for Equal work provision must be implemented.

5. Immediate implementation of mandatory social security mechanisms such as Creche, Day Care Centre facilities and constitution and notification of an Internal Complaints Committee as stipulated by the Sexual Harassment of Women at workplace (Prevention, Prohibition and Redressal) Act, 2013.

6. Increase the workforce of the university. The casual workers are overburdened with work as the University has not employed new workers for several years now. The union has demanded that all workers who have been illegally retrenched in last few years must be re-employed.

The Union had given a 30 days’ notice to the administration to respond.

Getting no response from the administration, the union started its peaceful protest at the VC office of NEHU from 1st June, 2022. The demonstration and hunger strike demanding implementation of the rights of workers continued till 15th June. Forced by the consistent struggle of the workers, the University administration has formed a committee to start negotiation with the workers on 15th June.

While the agitation of the workers has forced the administration to start the process of negotiation, the Union will resume the protest if the legitimate demand of the workers are not met.

It is, indeed, a shame that the casual workers are being illegally forced to work without any regularization despite more than 621 non-teaching posts are lying vacant in the university. The Union of the workers have raised their demand with the Union Education Minister Dharmendra Pradhan and the Governor of Meghalaya. Yet, the workers are services are not being regularised. The struggle of the workers shall continue till achieving their legal right of regularization of services.