US Starbucks Workers’ Unionizing: A Working-Class and an Anti-Capitalist Struggle 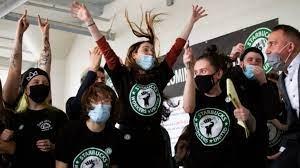 ​​​​​​Tyler Daguerre is a 26-year-old area organizer and barista in Boston. His Starbucks store became one of the first two stores to win their union election in Massachusetts. He serves on the organizing committee for his store as well as is involved at the regional and national level in the Starbucks workers’ movement. He focuses mostly on unfair labor practices, outreach, and community solidarity-building.

Tyler Daguerre: I had worked at Whole Foods, which is part of Amazon now, for three months at a Cafe before Jeff Bezos bought it. When I came to Boston to go to law school, I knew that I had to supplement my income to make ends meet and save some money. I love coffee and, I thought, Starbucks is a reputable company that tends to treat their workers well from what I understood. So, I applied and got hired.

Tyler Daguerre: I will speak for the 9000 company stores because I can't fully speak for the experience of a franchise store. Collectively what the movement tends to stand for is democracy in the workplace, then, of course the obvious being able to have a living wage, good benefits, without any sort of requirements for minimum hours worked and also prevent our employer from terminating us. We do not want to be inundated and stressed out on the floor. We are fighting for more benefits and material support for our well-being.

Tyler Daguerre: Recently, store employees went on strike for a day because there was a massive leak in the roof that was producing dirty water, whose source was unknown. They were told to continue to work during the incident and they would not be receiving hazard pay. Within less than 24 hours of the leak, the workers went on a strike. This shows how Starbucks is willing to put profits over the safety of its workers.

Tyler Daguerre: Right, every Starbucks store votes for its own union at this point. As we were one of the first stores to unionize in Massachusetts, other store employees started to contact us. We got involved in regional organizing and are now also coordinating at the national level. We are working with Workers’ United, which is affiliated with Service Employees International Union (SEIU) and is facilitating this campaign. At this time, 17 stores have petitioned to unionize, and 12 stores have unionized in Massachusetts. In the US, it is estimated that 350 stores have petitioned out of which 140 stores have unionized. Each Starbucks store has between 15 to 20 employees. We are aiming for 1000 stores to petition by September, 2022.

Tyler Daguerre: Almost all of the stores that have formally unionized in the United States are company owned stores. As far as franchise stores are concerned, historically, United Food and Commercial Workers International Union (UFCW) has organized franchise stores. At this time, this movement is company store focused.

One trend on Twitter that was popular was workers would use the hashtag #WhyWeOrganize and then explain their personal story for what issues they are fighting against and it became very popular. Another tactic is around sharing facts and making jokes out of the Union busting tactics that Starbucks uses. These play very well with a younger audience. Also, showing rallies and strikes are good on Instagram or Twitter. #WhyWeOrganize hashtag was very successful because it was people telling their real stories. Tick Tock has been used in a more lighthearted way.

Our collaborations with digital media outlets have been very successful. There are very prominent storytellers of unionization efforts across the country and they have had a pretty close relationship with our campaign. They have done a lot of short interviews and testimonials that I know have gotten a lot of publicity such as in the MorePerfectUnion campaign.

The idea that coffee workers of the rank and file are coming together and getting big victories against the multinational corporation - I think that gives people hope.

Tyler Daguerre: One of the main challenges that we have had is figuring out how to educate and reach workers before the misinformation campaigns begin to hit their stores. Starbucks has been unrelenting in trying to convince workers that the union is a third party and that they are coming to take your dues money. They are going to interfere with the good relationship that you have with your manager.

We are also dealing with firing of workers such as in Memphis. Starbucks has terminated more than 20 organizers nationally. Out of all the workers who have been formally fired, there have been many other workers who have been terminated or forced to leave. Recent labor shortages, which results in being overworked and understaffed, eventually, pushes workers out, especially when they are trying to make enough money to pay rent and eat.

Tyler Daguerre: We have received such a significant outpouring of support nationally. We have received solidarity from labor councils to other trade unions. Various labor working groups, customers and politicians have been very supportive. It has been young and longtime workers who have teamed up with longtime organizers. We have had politicians speaking out and supportive of us like Bernie Sanders, Alexandria Ocasio Cortez, etc. and the Democratic Socialists of America.

What has been even more impressive has been the outpouring of love and support from workers like Chris Smalls, the President of the Amazon Labor Union. For example, recently Chris Smalls was in Cleveland and he stopped by at an organizing Starbucks store because he heard that Cleveland was facing difficulties in organizing.

As of now, Starbucks Workers United has not been able to show the same amount of solidarity and support that others have shown for us. This is such a new campaign and where we are focused on a lot of organizing ourselves. I think that it is incredibly important and pivotal to return that love and solidarity. There should be conversations on not only how we can support workers nationally, but internationally.

When our union gets our contract, we are looking forward to focusing on not only the international struggle of baristas but also how we get our coffee. We rely on workers in Latin America, Asia and Africa who are being exploited as well. This is an internationalist struggle, and it will be important to support farm workers in the global coffee supply chain that Starbucks controls