AICCTU-CPIML Delhi Help Desk: In the Service of the People in Distress 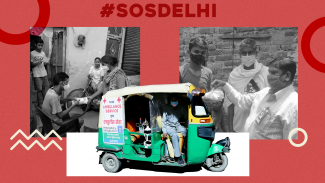 The deadly Covid wave of April-May 2021 hit Delhi very badly after receding in last December. According to official data, infection rate this time was as high as adding 28,395 new cases each day in mid-April. And the death rate was as high as 448 each day in early May. We may not forget the fact that official Covid data are hugely under-reported from actuals.

The fact that the latest wave is deadlier than all last waves shows how unprepared the Modi government is to deal with the Pandemic, despite the fact that it had a full year to set its priorities right.  They found time to tighten their control over Delhi government through LG, but they did not consider it necessary to prepare the city for facing the Pandemic in the last one year. The role of the AAP run Delhi government in letting so many people die cannot be neglected as well.

No Oxygen, No Bed, No Medicine- the Horror of April-May in Delhi

As soon as the latest wave hit Delhi, the unpreparedness of the city’s health infrastructure became evident to the entire world. Cry for Oxygen for breathless Covid patients was resonating in each and every neighbourhood of Delhi. Hundreds of people were dying within a few days of infection, due to lack of Oxygen supply. Even hospitals were sending out SOS messages for the supply of Oxygen cylinders. Several people died in the City’s well-known hospitals because they could not be provided with Oxygen support. Black market of Oxygen cylinders started operating while people were dying in need of Oxygen. A 10-20 litre Cylinder did cost around 40-50 thousand rupees when the pandemic reached its peak this time. Even an iota of preparedness from the government in arranging enough Cryogenic tankers and their transport to ensure Oxygen supply for medical use could have saved many lives.

The collapse of health infrastructure made the city’s population utterly helpless in the face of surging infection. Finding a hospital bed with Oxygen became nearly impossible for the patients. Harder was to find an ICU bed. The Delhi Government’s Corona App seldom offered updated information about availability of beds. Even when beds were reported available in the dashboard, actually getting it became another major struggle. Several hospitals denied availability when asked by attendants of patients. Attendants helping Covid patients had to stand in queues for hours to get medicine prescribed by doctors.

Student-Youth-Workers Started Covid Help Desk in Delhi on 20th April. As soon as the city started feeling the heat of the pandemic, AICCTU, AISA and CPIML activists began preparations for providing help to people struggling to survive the medical emergency. Several of our own activists fell ill, many lost their closest kins. We lost Comrade Om Prakash Sharma, veteran AICCTU activist and CPIML member in the Pandemic. Setting up a help desk was the need of the hour.

The Help Desk provided verified information on Oxygen, medicine and hospital bed availability. Our activists, especially from Jamia Milia Islamia, helped in refilling of Oxygen cylinders. Waiting for hours to procure medicine, ensuring a hospital bed by standing in queue, moving around the city to verify sources of Oxygen refilling and helping patient to get Oxygen in time- these were the main activities our volunteers were engaged in initially.

Struggle for Food, Wages and Access to Health Care –

While the city was struggling for Oxygen, the extreme vulnerability of the workers and residents of slums to survive the Corona wave became clear. Most of the informal workers and street vendors lost their jobs as soon as the lockdown was clamped in mid-April. They were left without money, food or medical care by the government.

Delhi experienced the painful journey of the migrant workers leaving the city in hunger and insecurity last year. Millions of migrant and informal workers had to experience hunger due to inaccessibility to the Public Distribution System. One year has passed since then. But still the workers and slum residents do not have access to ration cards and PDS.

The conditions of sanitation and health workers are found especially vulnerable. They are the ones who are carrying the burden of the City’s fight against Corona. But they are the ones who have been denied basic rights and dignity of workers. Most of the sanitation workers of Delhi have not got regular wages in the last one year. They have been made to work without payment. They don’t have access to health facilities as public health infrastructure is in shambles. From testing for Corona to access to food, medicine, oxygen and hospital bed- everything is kept far away from them. Needless to say, that most of the sanitation workers are from the Dalit community and one of the most discriminated against segments in this battle for survival in the Pandemic.

While our battle to ensure health rights for the workers continue, our help desk is reaching out to hundreds of workers in distress with ration kits and mask /sanitisers. Activists from working class backgrounds themselves are taking initiative to arrange help. A significant section of the progressive civil society has reached out to help our initiative financially. The solidarity of people with each other in such times of distress generates comfort and hope to fight for what residents of Delhi truly deserve.

While we wish to continue our help desk as long as possible and needed, we also feel the need to raise our voices to ensure our rights. We demand -