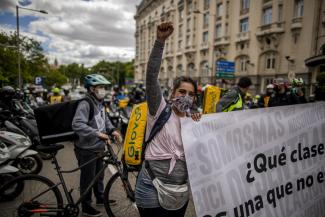 Spain approved a pioneering law on 11 May that gives delivery platforms a mid-August deadline to hire workers currently freelancing for them and that requires transparency of artificial intelligence used to manage workforces.

The royal decree passed by the centre-left ruling coalition immediately affects some 30,000 couriers. It comes in the wake of a ruling by Spain's top court last year and at a time when other countries in Europe and elsewhere are deciding on a labour model for the so-called gig economy, which is often blamed for precarious jobs and low salaries.

That's because, until now, gig and other contractor workers had to pay social security fees from their own pockets if they wanted to receive benefits including unemployment subsidies and a public pension.

The law makes mandatory for all businesses the ground-breaking requirement of having to hand over to the workers' legal representatives the information about how algorithms and artificial intelligence systems function in assigning jobs and assessing performance, among other aspects.

But, there is a criticism from workers’ side too. Dani Gutiérrez, a 29-year-old member of the "Ridersxrights" association who has failed to receive work from food delivery platforms after striking and protesting against their labour conditions, welcomed the new law but said that it lacked ambition.

"It should have gone much further, beyond the riders, because the working class is being pushed to precarious conditions through this type of collaborative economy, with fake freelancers and so on," Gutiérrez said.