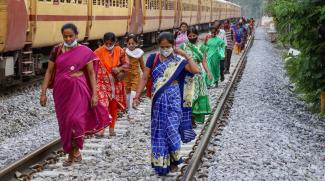 This is a well-documented report that has analysed the impact of one year of Covid-19 in India, on jobs, incomes, inequality, and poverty. The rising inequality and loss of wages is really alarming. It says, “our analysis shows that the pandemic has further increased informality and led to a severe decline in earnings for the majority of workers resulting in a sudden increase in poverty. Women and younger workers have been disproportionately affected. Households have coped by reducing food intake, borrowing, and selling assets. Government relief has helped avoid the most severe forms of distress, but the reach of support measures is incomplete, leaving out some of the most vulnerable workers and households. We find that additional government support is urgently needed now for two reasons - compensating for the losses sustained during the first year and anticipating the impact of the second wave.”

The report has captured the impact of Covid on employment status. Around 10 crores of jobs were lost in the first two months of the first Lockdown in April – May 2020. Around 1.5 crores of workers lost jobs in the first wave and could never return to their work despite majority of such workers were back at work by June 2020. It is quite revealing that the monthly per capita income for an average family in Oct 2020 in the post-first wave situations was only Rs 4979 which was lesser than its level of Rs 5989 in Jan 2020. It also adds that out of total decline in aggregate income, 90 percent was due to reduction in earnings while 10 percent was due to loss of employment. The situation was further aggravated mainly in BJP ruled states where working hours were extended to 12 hours and more importantly without payment of double wages for overtime work.

The report also notes that most workers went back to work despite reduced earnings in the same job that they performed in pre-Covid period. While men who lost the employment joined the army of self employed and informal workers, women were predominantly confined to their household work.

Loss of employment to women was the worst as more than 47 percent of women lost their employment permanently while only 19 percent could retain the work. Whereas the men who retained the employment was 61 percent and who lost employment was 7 percent. Gender bias of Covid impact is crueller for women than men. On the other hand, the study also delineates that the burden of domestic work increased without any corresponding relief in hours spent in employment for working women. According to the India Working Survey conducted in Karnataka and Rajasthan, the proportion of working women who spent more than 2 hours a day cooking went up from 20 per cent to almost 62 per cent in Karnataka and from 12 to 58 per cent in Rajasthan.”

The report also says that 33% of workers in the 15-24 years age group failed to recover employment even by Dec 2020 while the number was only 6% in the 25-44 years group. The young workers were the worst sufferers, next only to women, in case of rising unemployment after first wave of Covid 19.

After the first Lockdown, workers were left with no other option but to join precarious and informal employment. According to the report nearly half of formal salaried workers moved into informal work, either as self-employed (30%), casual wage (10%) or informal salaried (9%) workers. The nature of employment available to them was also very much divided on caste and religion. The assessment is that the general category workers and Hindus were more likely to move into self-employment while marginalised caste workers and Muslims moved into daily wage work. The report also makes a remarkable observation, “Agriculture, construction and petty trade emerged as fallback sectors. Education, health and professional services sectors saw the highest outflow of workers into other sectors. About 18% of education sector workers were now in agriculture and a similar share of health sector workers were engaged in petty trade. For Hindus, agriculture was a major fallback sector absorbing between 10 to 20 percent of workers from other sectors. For Muslims, trade was the major fallback sector and about 20 to 35 percent of workers from other sectors were now in trade.” As a result of moving into informal work and also because of depressed economic conditions, monthly earnings of workers fell on an average by 17% during the pandemic. Self-employed and informal salaried workers faced the highest loss of earnings. 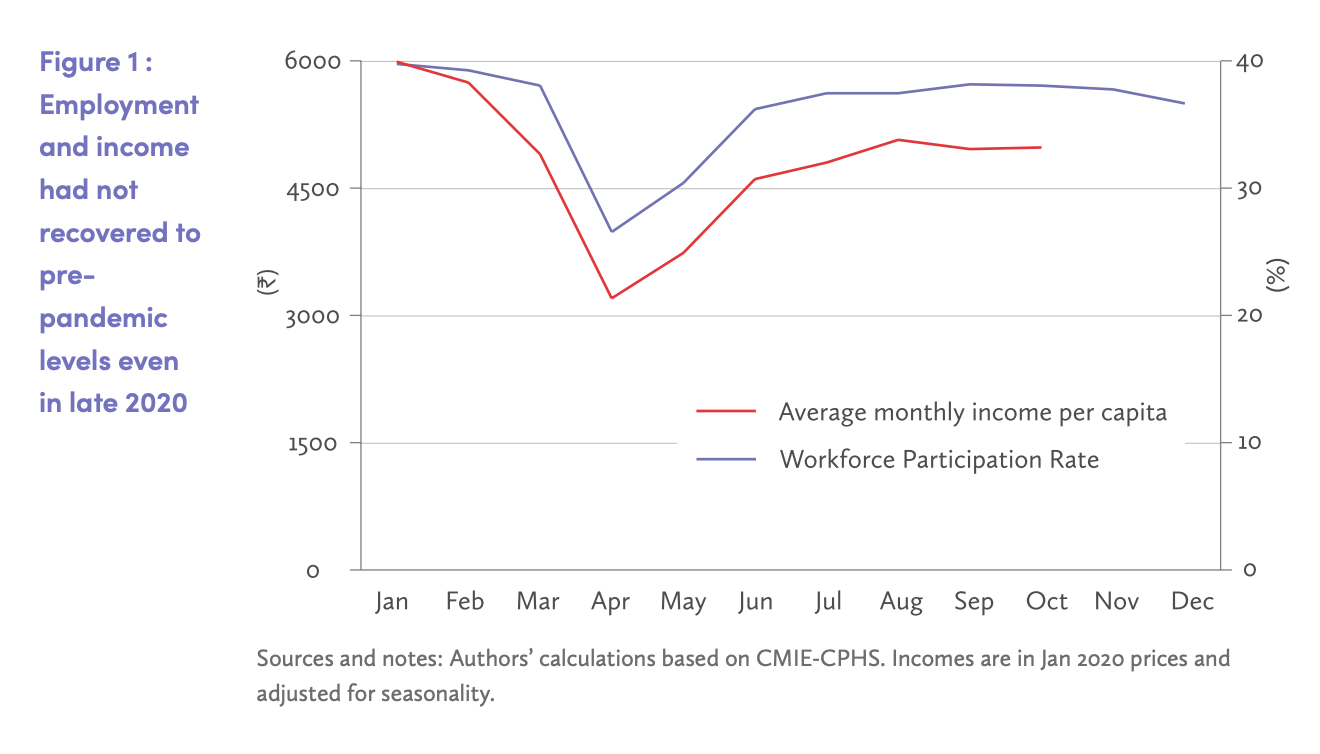 More than anyone else, the poor in the country were to pay a heavy price. The estimated 20 percent of poorest households lost their entire earnings while the richer households are estimated to have suffered losses less than a quarter of their pre-pandemic incomes. The richest in the country, like Ambani and Adani, were the highest beneficiaries of Covid. Ambani earned 90 crores per hour and Adani has moved to top second position in Asia and 14th position at global level.

People had to cope up with the disaster by drastically cutting down their food intake and other basic, essential necessities. They had to sell their assets, borrow from informal sources including friends, relatives and money lenders. “In the India Working Survey, over 90 per cent of respondents from Karnataka and Rajasthan reported to have borrowed money sometime between April and August. The median loan amount was 15,000 (mean amount of 26,300). CLIPS revealed that amounts borrowed by poorer households were a much higher multiple of their pre-pandemic incomes compared to better-off households. And 84% of those who had borrowed money reported doing so to finance food, health, and other daily expenditures.

The Mirage of Government Relief

Pradhan Mantri Garib Kalyan Yojana (PMGKY) promised many things including free rations, cash transfers, MGNREGA, PM-KISAN payments, and pension payments. Atmanirbhar Bharat also was announced saying the vulnerable households will be protected from the impact of the pandemic. But, according to India Working Survey in Rajasthan and Karnataka, what has actually happened is that only 65% of ration card holders received some PMGKY allocation (i.e. grains in excess of the usual quota) while 35% only received their usual PDS quota (no extra grains). Only 60 percent of women Jan Dhan account holders received cash assistance while another 30 percent did not get any cash benefit at all. It is all the more saddening that 10 percent did not even aware of such cash assistance.

MGNREGA was the major relief for rural households in the period of pandemic. The report states that till November 2020 over 252 crore person-days of work were generated, an increase of 43 per cent compared to previous year. Over 10 million (1 crore) more households worked in MGNREGA in 2020-21 as compared to previous year. Still, the demand was much higher than that was offered and only 55 per cent of those rural respondents who demanded work had been able to get it. People wanted work for more days to mitigate their poverty but to no avail.

Migrant workers had to bear the brunt of the pandemic associated loss of livelihood. The report elaborates, “Class, caste, ethnic or linguistic identity, and lack of stable residence as well as political voice render casual wage migrants in industries such as construction, the most precarious and hard to reach with social protection policies. In Azim Premji University CLIPS 81% migrants lost employment in the lockdown compared to 64% non-migrants. 31% reported not being able to access rations compared to 15% non-migrants.” 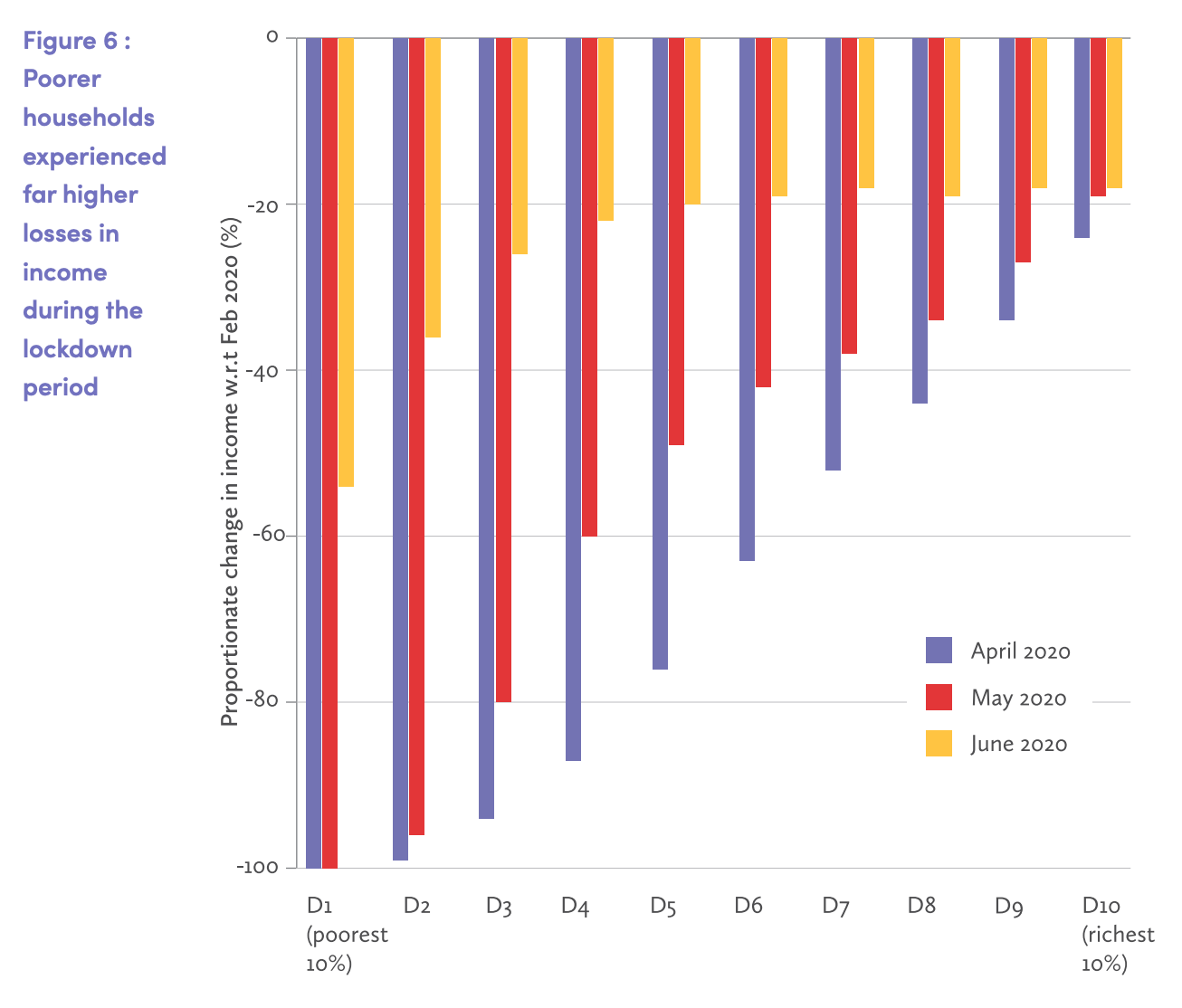 We have just reproduced some of the recommendations of the report below:

a. So far, India’s fiscal response to Covid, amounting to around 1.5-1.7% of GDP, has been conservative. The impacts of the second wave are still unfolding and may be as large, or larger than those we report for the first wave. Further, coming as it does on the back of depleted savings, debt, and reduced fallback options, the second wave can lead to potentially larger impacts on work, incomes, food security, health and education. The states, who are at the forefront of the pandemic response in terms of containment as well as welfare, are severely strained in their finances. Thus, there are compelling reasons for the Union government to undertake additional spending now.

These measures, taken together, will amount to approximately I5.5 lakh crores of additional spending and bring the total fiscal outlay on Covid relief to around 4.5% of GDP over two years. We believe that this large fiscal stimulus is justified given the magnitude of the crisis. For example, the proposed cash transfer is just equal to incomes lost last year by the poorest 10% of households, leaving alone the second wave impact.

c. Failure to take action now will cause short-term hardship to continue, and may compound the long-term effects leading to years of lost welfare gains. Increased poverty as well as loss of savings and productive resources can lead to poverty traps. Nutritional and educational deficits, occurring due to stressed household finances, can have long-term effects. Women leaving the labor market can lead to long term increases in already large gender gaps. Youth may also experience long-term impacts on earnings and productivity due to these lost years.

d. Someday the pandemic will be behind us, and the task of economic revival will include addressing weak structural transformation, persistent informality and inadequate employment generation. The time is also right to correct the historical undervaluation of workers who have played a crucial frontline role in the response to the crisis. We propose a framework for a National Employment Policy, which includes the promotion of public investment in social infrastructure as well as the facilitation of private investment. These, together with a comprehensive social security infrastructure that includes rights-based entitlements, portable benefits, and empowered worker welfare boards, can tackle the persistent problems of low earnings, low productivity and precarity.

We hope that the findings in this report contribute to the difficult journey of economic revival that lies ahead for India.