The LIC Disinvestment – an Explainer 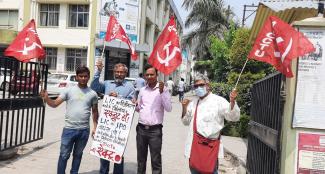 Insurance is an understanding where a company [or LIC (Life Insurance Corporation) here] agrees to pay a certain amount for a loss /illness/ death to the person who pays premium to it or to her family. It is extremely important in a country that lacks a strong social security framework, since families can otherwise be plunged into a debt trap in case of arising of such a situation. Insurance provides safety to families in case of an unanticipated loss and performs an important social welfare function especially in poorer and more vulnerable households.

At the time of nationalization, the government argued that:

(i)            insurance is basic to the economy and a form of social service which should be run by the state,

(ii)          the state should enter this field to augment capital resources, and to this end, “activisation” of the industry should be given top priority, particularly in rural areas, and,

The finance minister at the time, CD Deshmukh, stated:

The nationalization of the life insurance business is a further step in the direction of more effective mobilization of people’s savings ... Insurance is an essential service which a welfare state must make available for its people ... With profit motive eliminated, and the efficiency of service made the sole criterion under nationalization, it would be possible to spread the message of insurance as far and wide as possible.[2]

Policy holders pay premium to LIC, with medium to long term agreements, and LIC invests this amount. Some policy holders also choose to be “participatory” policy holders, which means that they participate in the risks by providing risk capital. Before the law was amended in 2021, these participatory policy holders were rewarded by payment of 95% of the surpluses each year in the form of bonus. Only 5% goes to the Government.

Officially, LIC was 100% government owned before the disinvestment. But this is not a proper characterization. This is because the bulk of LIC’s wealth was created through the savings of the economically poor and the middle classes. Government has not put more money in, after 5 crores in 1956, and the entire money comes from policy holders (which is Rs. 5.4 lakh crores officially, and much more likely). Even in 2011, when the capital was required to be increased to 100 crores, the same was not put in by the government, but taken from profit generated through policy holders’ money.

Therefore, the government is only acting as a custodian of wealth belonging to the policy holders. It is with this argument that a case has been filed in the SC (Supreme Court) against the disinvestment, stating that the amended provisions of the Act are contrary to Article 300A of the constitution of India, which protects the right to property.

LIC is the largest life insurer in the world, in terms of the number of policies and claims settled. As of 30th September 2021, it had over 282 million policies.[3] Though there are over 20 other insurance companies now, LIC has the majority in the market and had a net income of Rs. 6.82 lakh crore in 2021.[4]

LIC has also been forced to purchase several other government companies which have become bad assets and as part of the disinvestment policy of the state. These companies have also been made weaker over time, and often have huge debt and non-performing assets (NPAs). This was started before the change of dispensation in 2014 but escalated substantially after. Some examples are the purchase of Rs 7,000 crore in disinvestment of Coal India in 2015, Rs. 8000 crores in disinvestment of Indian Oil Company (86% of shares) in 2015, Rs 8,000 crore in the disinvestment of General Insurance Corporation of India, and Rs 6,500 crore in the IPO of New India Assurance Company, both in 2017, and Rs. 2,900 crore (70% of shares) in disinvestment of Hindustan Aeronautics Limited in 2018, and Rs 12,000-13,000 for purchase of IDBI bank. This has resulted in a doubling of the NPAs of LIC between 2014-15 to 2017-18.[6]

VII.    What is disinvestment?

Disinvestment is when the government reduces its holding in corporations / companies belonging to it. The present government has an explicit policy of disinvestment, and sets massive disinvestment targets each year. We must see disinvestment as a first step to privatization, which is also a primary objective of the government. Disinvestment is usually started by an IPO (an Initial Public Offering) where people can buy a small piece of the company or a “share” in the company. Each share will be given a small value and represents ownership of a part of a company, which means that shareholders will have some say in the decisions taken by the company.

VIII.    How has the government disinvested in LIC?

The Government has been speaking about the disinvestment of LIC over the last few years. It conducted the IPO between 4th May 2022 and 9th May 2022. The government then sold 3.5% of the LIC. Importantly, before the IPO, the government amended the LIC Act in 2021 to allow for disinvestment. Two important changes brought by the Amendment are as follows.

Secondly, the amendment provides that after the IPO, for the first 5 years, the Government must own at least 75% of the issued share capital, and thereafter, not at least 51%. There is a clear path to privatization, and even this will be amended.

Over the past twenty years or so, insurance companies across the globe have been valued by an “embedded value” or EV. Before the LIC IPO, the government appointed the company Milliman to evaluate the EV of LIC and concluded that the EV is Rs. 5.39 lakh crores.

However, this is not a correct valuation of LIC. Firstly, Milliman did not even consider the real estate owned by LIC. LIC is second only to railways in real estate ownership in India, with estimated value of Rs. 10-15 Lakh crore.[8] Secondly, the EV disregarded the massive goodwill value of LIC across India. LIC and its various subsidiaries have a unique value in India. Serious doubts have been cast on the manner of valuation of EV by Milliman.[9]

Not only this, but the way the EV was used to value shares was also highly shocking. Usually, a multiplication factor of the EV is used by insurance companies to arrive at the price of stocks. HDFC Life, SBI Life and ICICI Prudential — had applied a multiplication factor of between 2.5 and 4 to arrive at their issue price. However, for LIC, the government chose to use a multiplication factor of 1.1 only! Officials claimed that the Ukraine war, and market conditions caused the government to take this decision. If we calculate the value using the multiplication factor of 3.96 as used by HDFC life, the loss to the government is Rs. 54,950 crores! [10] As Mr. V Sridhar, a senior journalist, and a member of the People’s Commission on Public Sector and Public Services who has written extensively about the LIC disinvestment argues, “the headlong rush to the IPO has nothing to do with the Modi government meeting its disinvestment target. If it was indeed motivated to meet those targets, why on earth would it willingly suffer losses of the magnitude that it is now going to suffer?[11]

At the outset, disinvestment must be seen as the first step to privatization. With disinvestment, there is a change of the financial model as large private companies start to hold ownership. Instead of the welfare model, maximization of profits becomes the goal. Since the shareholders now have control over the profits of the establishment, they will have a say in decision making of where further investment should be made, and which areas should be focused on.

Resultantly, insurance in “less profitable areas” would now be cut down, which would mean lesser insurance for economically weaker sections and rural areas.  Right now, LIC bears the burden of insuring rural India – only 107 offices are run by private insurance companies as opposed to over 1000 offices of LIC.[12] In 2021, 15% of LIC’s new business came from rural India.[13] As of now, as per the All-India Insurance Employees Association, “The average premium size of LIC is Rs 11,000 as against Rs 50,000 in the private sector, which targets the creamy layer.”[14] However, after disinvestment, focus will be on higher premiums rather than increasing coverage of poorer households.

With the shift in decision making, the investors are likely to focus on higher–risk investments, whereas the policy holders require stable and low risk investments. Additionally, the government control over small and medium households’ savings, which is an important economic necessity, is likely to reduce.

Of course, the impact on the employees of the corporation must also be considered. The increasing contractualisation of the workforce is likely to be exacerbated with disinvestment and privatization, and permanent jobs will reduce.

Constitutionally, India is still a ‘socialist’ state. Articles 38 and 39 of the Constitution, which are directive principles of State policy mandate the state to “strive to minimise the inequalities in income, and endeavour to eliminate inequalities in status, facilities and opportunities”, and more particularly to direct its policy towards securing “that the ownership and control of the material resources of the community are so distributed as best to subserve the common good”. In fact, this was one of the reasons for nationalization of LIC in the first place. The deliberate destruction of LIC runs counter to this mandate.

In the Lok Sabha, the Minister of Finance was recently asked about the effect of disinvestment on the social objectives of LIC. However, the Minister bypassed the question, and stated that “The proposed listing will, inter alia, enable the Government to unlock the value of its investment in LIC, position LIC to raise capital from the market for its future growth, and improve its governance through greater market discipline and transparency resulting from listing requirements and disclosures. These benefits, in turn, will equip the Government and LIC to pursue growth of the economy and the insurance sector and thereby to promote development and social protection”[15]

The disinvestment of LIC through blatant undervaluation has already resulted in huge losses. After the IPO, LIC lost its position as 5th most valuable company, and has losses of Rs. 77,600 crores in market capital.[16] The actions of the Government cannot but be viewed as an assault on the rights of the public and as an anti-people measure. The only beneficiaries will be large corporations, and this will widen the social inequality in the country. A joint struggle must be launched to challenge this handover of national wealth and to demand accountability of the government.

[4] Amanulla Khan, ‘As the Mega LIC IPO Looms, Did it Fulfill the Objectives of Nationalisation?’, The Wire, 11 January 2022.

[12] Kaushal Shroff, ‘As the Clock Ticks Towards LIC IPO, What Policyholders Should Consider’, The Wire, 29 January 2022.