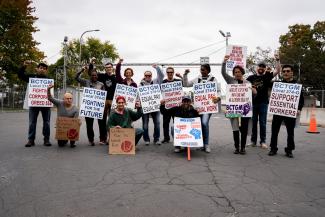 Beyond the everyday headlines, the United States seems to be heading towards a new wave of labour militancy. Almost every major industry in the US seems to have been hit by the recent mobilization of workers, who are no longer willing to work for poverty wages. While the labour shortage triggered by the restrictions due to COVID-19 is seen as the immediate cause, the roots of the problem lie deep within the economy itself.

Workers rights have been under attack in the US since the Reagan Era politics of tax cuts and ‘small government’, as social security, unemployment benefits, and unionisation rights were attacked by both the Republican and Democratic party led administrations over the past four decades. The result? Wages have stagnated while the cost of living in the US has skyrocketed resulting in massive indebtedness for the average American. 77% of US households have had some kind of debt with a total $1.57 trillion owed in student loans and $10.44 trillion owed in mortgage payment. This meant that workers had to work whatever low wage job they could find in order to just be able to keep their heads above water.

The pandemic pushed the crisis into an overdrive as workers were forced to risk their lives, work longer hours, and put up with appalling conditions. The pause on repayment on student loans and the halt on rental evictions under such conditions have allowed workers for the first time to be able to reorganise themselves to fight for better conditions. Workers are simply refusing to do poorly remunerated work and this has in turn triggered a shortage of labour.

Companies like John Deere, which manufactures agricultural machinery, have refused to share their profits with the workers, while their CEO has received a pay hike of 160%. This has resulted in 10,000 workers resorting to a strike for better pay for themselves as future workers. 1,400 workers at Kellogg’s cereal plants across the country, 1,100 coal miners at Warrior Met in Alabama, and 420 United Food and Commercial Workers (UFCW) members at Heaven Hill Distillery in Kentucky have all resorted to strikes that are ongoing. The strikes of 30,000 Kaiser Permanente workers & 60,000 International Alliance of Theatrical Stage Employees has generated waves in the US labour militancy.

The Department of Labour has estimated that 4.3 million employees, i.e. 2.9% of the country’s workforce, have quit their jobs in the month of August alone! This has had certain employers bemoaning that “no one wants to work any more” (see photo) despite the fact that they themselves have refused to offer better pay and work conditions. Certain Republican party representatives have started advocating an end to the pause on debt repayment and rental evictions hoping that a return of the misery faced by workers would force them to return to work. We have often been told numerous times that the capitalist labour market works by simple rules of demand and supply, and workers must reskill themselves if they want higher pay, but now when demand for labour outstrips supply, employers are demanding an artificial inflation on supply to keep labour costs low! It does appear that capitalists cannot follow their own rules for once.