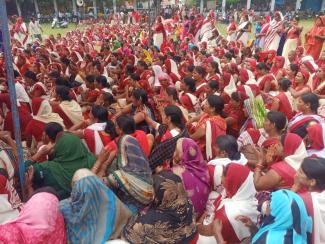 Uttar Pradesh ASHA Workers Union (affiliated to AICCTU) has concluded its 9-month-long strike at the National Health Mission district office by organising the ‘Dastak Do’ programme.

District level protests and a Mahapadav in the state capital Lucknow were held as per resolutions passed in the state convention held on May 15, 2022. After that a week of resistance was observed by ASHA workers tying black ribbons while working on their duties. Dhikkar Diwas was observed statewide on September 27 and 28, followed by demonstrations on October 17, 18 and 19 in various district offices with the charter of demands of ASHA workers. The main demands included the construction of a mechanism to end corruption, guaranteeing minimum wages and providing life insurance of at least Rs 10 lakh to 50 lakh. Demand to include provisions like paid leave for mothers and weekly and annual holidays for all ASHA workers were also raised. Other major demands included compensation for families of ASHA workers who lost their lives in accidents and  recognition of ASHA workers as state government employees.

The consistent movement of ASHA workers have been defying the terror machinery of the Yogi government. It continues with extensive mobilisation and expansion, maintaining its total energy and enthusiasm from start to end. More than 70,000 ASHA workers participated in various stages of the agitation, which began in five districts and spread to more than 40 districts across the state from June 6 to October 19, 2022. Districts like Bareilly, Hathras, Aligarh, Hardoi, Pilibhit, Gorakhpur, Deoria, Kushinagar, Rae Bareli, Allahabad, Basti, Mau, Varanasi, Barabanki, Kanpur, Hamirpur, Lakhimpur, Badaun and Unnao became the centres of significant mobilisation.

During this period, the state apparatus, the health department, several NGOs which have thrived under government protection tried to weaken, break up and thwart the movement. The Yogi government attempted to stop the protests by imposing Article 144, arrests, lathi charges, threats of dismissal, etc.

This  6 month long movement of the ASHA workers have raised fundamental questions concerning the working condition of the ASHAs. At the same time, the movement has generated an energy that has resulted in the emergence of a new leadership. This leadership is not only building up and expanding the organisation but also making the ASHA workers conscious about the anti-working class and anti-women policies of the Yogi government.