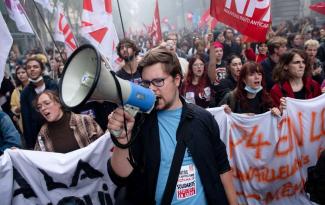 A spectre is haunting  Europe—the spectre of Strike. Strikes of this scale and dimension, and with such enthusiasm and resoluteness had not appeared in the advanced capitalist countries for past many decades. The organised working class of Europe has chosen the right moment as the neo- liberal economy is on the cusp of deep crisis, unable to find ways and means to come out of this catastrophic situation. The International Monetary Fund (IMF), which in last October expected a strong recovery post the pandemic which bruised and battered the global economy, has revised, rather downgraded the growth projections for the year 2023. The IMF chief also warned of increasing recession risks amid constant shocks inflicting the global economy that, as she informed with great dismay, likely stares at an output loss of about $4 trillion by 2026. She reminded that this "$ 4 trillion global output loss is of the size of German economy — a massive setback for the world economy."

The highest rates of inflation in four decades are squeezing the common people while the corporations are doing well. It has been noted by the USA’s Bureau of Economic Analysis (BEA) that while the wages and other forms of personal incomes continue to fall behind the inflation, corporate profits have been soaring to newer heights. In a report, BEA recorded that the after-tax corporate profits rose at a 41 percent annual rate after the inflation in the second quarter of the year and have risen at a 17 percent annual pace since the pandemic recession started two years ago. Meanwhile, the inflation-adjusted purchasing power of individuals’ after- tax income has fallen for five quarters in a row.

In USA, the Economic policy Institute has shown that increasing corporate profits have contributed disproportionately to inflation. From the second quarter of 2020 to the last quarter of 2021, corporate profits were responsible for 54 percent of overall inflation— a dramatic increase from the 11 percent they accounted for in the previous four decades (1979-2019).

By contrast, unit labour cost were responsible for less than 8 percent of the inflation compared with the 62 percent that it was during the previous decades. Indeed, because of the recent price rise, the real value of federal minimum wage is now at its lowest point in 66 years!

In Spain, Greece, France, Germany and Belgium workers' are demanding higher wages to offset the inflation which in Eurozone had climbed to 8.9 percent in July. Even Germany, which was relatively less affected by strikes in the past in comparison to other European countries, is witnessing strikes for higher wage demands. Workers in the transport sector, both in the Netherlands and Germany have been on strike: the railway workers in the Netherlands, and airlines workers in Germany. The situation is going to be worse as winter approaches, as the sanctions against Russia would greatly reduce the supply of oil and natural gas causing a devastating impact on the economy. Stated simply: workers' share of the national pie is shrinking while corporates are grabbing far more than before!

The inflation rate in Britain is at a 40 year high, reaching to 10.1 percent compared to the July of the previous year. This economic crisis has snowballed into political area and within a short span this country has witnessed several changes in the highest political office, and within the ruling party. Britain is currently facing a spate of strikes by railway workers, postal workers and dock workers demanding higher wages to offset the erosion of the purchasing power due to rising inflation. Even lawyers and teachers are not far behind. They are demanding higher salary as inflation is proving difficult to tame, and is expected to touch 13 percent this year. In the USA also, the share of wages has rapidly diminished because of inflation.

German air carrier Lufthansa, Europe's second largest airline, reached an enhanced pay deal with Verdi Trade Union which would raise salaries for thousands of ground staff. The agreement would increase monthly basic salaries by 2.5 percent beginning in January 2023. Salaries would further increase by another 2.5 percent on July 1 next year. This deal, valid for 18 months will impact some 20,000 Lufthansa ground staff represented by Verdi. The management was forced to negotiate with the union after Lufthansa ground staff’s strike paralysed the carrier's operation on July 27, leading to cancellation of over 1,000 flights and stranding passengers. The airline workers of France, Sweden, Norway and Denmark have also resorted to strike demanding higher wages.

Norwegian offshore oil and gas workers went on strike over pay hike in the month of July, and the first day of planned industrial action threatened to slash the country's gas exports by almost 60 percent and further exacerbate the supply shortages caused by the Ukraine war. The Norwegian Government intervened and pay hike paved the way for amicable settlement with the striking union.

In recent past, Britain has witnessed an unprecedented explosion of industrial action in various sectors, something not witnesses in last many decades. Rail workers across the country, bus drivers, call centre employees as well as criminal defence lawyers in England and Wales are among those who have gone on strike against rising prices and demanding higher pay and secured workplace. The rail strike this summer—the largest in three decades—brought much of the Britain to a standstill. Demands for higher pay amid soaring inflation at 10.1 percent—the highest in 40 years— and 80 percent increase in energy bills have led hundreds of thousands of people in Britain to go on strike, bringing to halt the train services, trash collection and port shipments around the country.

Across the board, the strikers argue that the company's multi- million pound profit last year showed that it could afford to raise wages for workers who feel undervalued after working through the pandemic. The New York Times reported that at the end of August 115,000 postal workers in UK went on strike and letter delivery was cancelled. For over 500 years, mail was part of the state, but Royal Mail group is now fully privatised and its largest shareholder is a Czech billionaire.  This unprecedented wave of workers strike was described by the British press as 'summer of discontent' and the issues at the heart of strikes included privatisation of public services and weak pay growth. Added to these were impact of pandemic lockdowns that further gave rise to unimaginable inequalities.

The criminal defence lawyers went for indefinite strike affecting thousands of court trials. The lawyers—members of the Criminal Bar Association—were trying to force the government to increase their fees to prevent an exodus of lawyers from legal aid system. A large body of civil service union is preparing for a strike and similar preparations are undertaken by several National Health Service workers and teachers' unions.

Workers Union organized a march of 100,000 workers on European Union (EU) Institutions in Brussels. A general strike crippled the busy schedule in Spain. It was organised to protest against the budget slashing plans, and austerity measures adopted by governments seeking to control debt.

Several governments of EU were pushed to the brink of financial collapse and have resorted to imposing punishing cuts in wages, pensions, employment—cuts that have brought workers out in the streets by tens of thousands during the past few months.

In Spain, extremely unpopular measures were adopted by the ruling elite to save Europe's fourth largest economy from a bailout like the one that Greece needed to avoid bankruptcy. By adopting these anti people measures, Spain was able to reduce its deficits, but it had to pay the price as every two out of five workers lost their jobs. The salary cuts, pension reforms, and new laws gave added teeth to the employers to fire workers, and they also curtailed the traditional negotiations between management and workers that constituted a past practise of Europe's welfare states. Greece has cut civil servants' salaries, trimmed pensions and increased consumer and income taxes. The financial crisis has created an unemployment pool of 23 million in Europe.

Street demonstrations have been held across the France and schools and transport services were disrupted by the major strike since Emmanuel Macron won re- election as President in April.  Over 100,000 transport workers, school teachers and medical staff marched across French cities after trade unions called for a mass walkout over pay, presenting president Macron with one of the stiffest challenges since his re-election. Primary school teachers stopped work, so did train and bus drivers and nuclear power industry workers. Workers marched in cities across France as unions pushed for salary increase to address the impact of spiralling inflation and rising prices.

The striking unions demanded for scrapping of Macron's plan to progressively raise the retirement age from 62 to 65. The president's insistence on pushing through the pension system—one of his main re-election campaign pledges—remains broadly unpopular in polls.

The government argues that Macron has approved wage increases for civil servants and teachers, and has put in place one of Europe's most generous anti-inflation safety nets that has capped energy prices for households and held down inflation. However, unions contended that wages were still being eroded by inflation and more needed to be done. The promised salary increase for teachers are not expected until late next year, with confusion surrounding as to which teachers would benefit and by how much.

While the working people across the globe are fighting for better wages and better life, the United Nations (UN) has warned of a grave food crisis. The Executive Director of the UN World Food Program told the UN Security Council that the 345 million people are facing acute food insecurity across the 82 countries and noted that the world is facing "a global emergency of unprecedented magnitude" with 345 million people heading towards starvation. According to him, 70 million people are pushed closer to starvation due to the war in Ukraine. He further added, "50 million of those people in 45 countries are suffering from very acute malnutrition and are "knocking on famine's door". He remarked, "What was a wave of hunger is now a tsunami of hunger"!

The entire globe is on the cusp of severe economic crisis. Workers movement, people's movement are gaining momentum in different parts of the world. It is the task of the working people to lead the suffering humanity at this juncture.