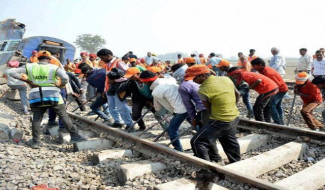 When the Railways came into being in British India, the daily rated workers were employed for laying track of 34 km between Bori Bunder (Bombay) and Thane during 1850's. This workforce was of poor peasants uprooted from village and artisans facing gradual destruction of independent crafts. Even in plague affected areas such workers were forced to work as slaves for long hours and stacked in godowns like cattle. Without medical aid, living room and proper food/drinking water, they had a subhuman existence with premature death, disease and destitution awaiting them. With their sweat and blood, the first train finally steamed off Bombay to Thane on16 April 1853.

The post-independent era begins from the I Five Year Plan proposed by the Planning Commission. It laid stress on rapid expansion of railways to the remotest corners of the country as a cheap mode of people's transport. To construct new railroad across the country, huge contract workers were to be recruited from nearby villages. Such workers were termed as casual labour on 'no work, no pay basis' without the benefits of PF, gratuity or pension. Only in the event of accident on duty, free medical treatment was given by the Railway Hospital. It is noteworthy that during this period no intermediary agent used to be engaged. Local officials were authorised  to recruit the workers as the direct employer. Meanwhile, the First Pay Commission fixed Rs. 55  (Rs.30/+ Rs.25/ as D.A.) as minimum salary for the govt. employees including Railwaymen. In  sharp contrast, the daily rated  workers were recruited with less than a Re.1 of wages. During the 1950's Communist Party of India (CPI) played a pioneering role in organising this large contingent of unorganised workers into union and achieved casual status through consistent struggles. During the historic 1974 nationwide strike, about 3.5 lakh casual workers too joined the strike along with 16.5 lakh permanent workers. One of the 6 point charter of demands was decasualisation and the same demand was acceded to by the then govt. This was possible through the unity and solidarity forged through 20 day strike of Railwaymen, both casual and permanent workers.

From mid-80's ban on recruitment of casual/substitute workmen in railways by the local authorities was imposed and gradually the system of such recruitment was dispensed with. In the 1990s – the era of liberalisation, privatisation and globalization, the contract system was introduced. The  railways being the principal employer started engaging contractor as intermediary agent to undertake the outsourced job of non-core activities in railways and soon a portion of core activities were brought under contract system. A section of railway bureaucracy in connivance with  contractors denied statutory minimum wages. Social security benefits like EPF, ESI and weekly rest were denied.  In a month, 26 days wages are paid after deducting 4 days wages on account of  weekly rest. No appointment letter has been issued as the contractors resorted to 'hire and fire' policy. The workers are forced to work for 12 hours without any extra remuneration. The payment of monthly wages are inordinately delayed. Those who raise voice of protest against the high-handedness of contractors or take leading role in union formation are summarily retrenched and even false cases filed against the union leaders by RPF officials in connivance with railway bureaucracy. In fact, an oppressive rule of contractor backed by a corrupt nexus of bureaucracy, contractors and Railway Police Force (RPF) continues in Indian Railways.

New Code on Occupational Safety, Health and Working Conditions (OSHWC) and its Impact on Contract Workers

The CLRA aimed at regulating employment of contract workers as well as protect them against exploitation. Now under Modi Regime the CLRA is subsumed by OSHWC Code by doing away with crucial provisions in regard to the responsibility and obligations of the principal employer for the protection of the rights of the contract worker. It also weakens the role of statutory tripartite  machinery for negotiated settlement of disputes. It further transpires from the confusing definition of core activity that there will be no bar in employing contract labour through a registered contractor for any core activity. In railways, almost all work related to operation, maintenance and other services is perennial in nature. It is apprehended that in near future 50% of maintenance work is going to be handed over to big companies like L&T, KEC International. It is further clear that the workshops are likely to be sold to the corporates with the closure of COF MOW (Central Organisation for Modernisation of Workshop) from  December 1, 2022, as advised by the Principal Economic Advisor and Finance Ministry. Thus, oppressive 'contract raj' will rule over the railways.

As per an independent survey conducted by IREF, at present 2.5 lakh contract workers are engaged in core & non-core activities in Indian Railways. The need of the hour is to unionise the vast youth of unorganised workers who form the backbone in carrying out the day-to-day operations of railways. Indian Railway Employees Federation affiliated with AICCTU, a lone LEFT Federation in the railways, a crusader against privatisation has been working hard towards the direction of organising the most exploited unorganised workers in the railways and developing class consciousness by building the bridge of working class solidarity between the organised permanent workers and the contract workers.