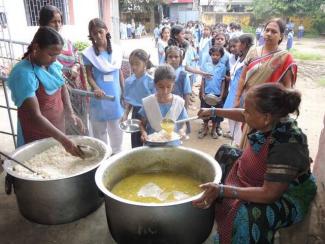 The Mid Day Meal scheme was initiated in Jharkhand in 2004-05. The Village Education Committees were entrusted with the responsibility of employing cooks for the scheme. In the initial phase, mere 25-30 paisas were fixed as honorarium for every meal cooked for a student. If meals for 100 school kids were cooked, the total honorarium to be paid was 25 rupees. And, say for example, if two cooks were engaged in cooking the 100 meals, honorarium payable to each of the cooks would be a mere 12.50 rupees.  The honorarium money used to come in the account of the president or secretary of the Village Education Committee. They used to disburse the payable amount to the cooks once or twice in a year.  One cook is employed for every 50 enrollments of students in a school according to the existing practice in Jharkhand. On an average, one to six cooks are employed in a school in Jharkhand.

The precarious work condition and payment structure of the cooks are amplified by the fact that most of the cooks are uneducated and thus it becomes difficult for them to keep a proper account of their payment. To get rid of this exploitative and dependent condition, the MDM cooks started a movement demanding payment of the honorarium in their own account in 2008-09. The movement began in Deoghar and Dumka areas of Jharkhand. The union of the MDM cooks emerged from out of the movement and the founding conference of  Jharkhand Government School MDM Cook Union (Jharkhand Rajya Vidyalaya Rasoiya Sangh) was held in Hazaribagh on 10th March, 2019. A 13-member committee was elected through the conference. Comrade Anita Devi was elected as the secretary and Comrade Geeta Mandal was elected as the president of the union. The Union has expanded itself in different districts of Jharkhand since then and it now has an active presence in different blocks of Santhal Pargana and Palamu also.

The union has been able to successfully intervene in a major discrepancy in payment of MDM cooks in Deoghar district. Here a total 4242 MDM cooks are engaged in the scheme. But the government was only paying for honorarium of 2628 cooks which were then being distributed to 4242 cooks. The union intervened and ensured that the stipulated honorarium for all 4242 cooks was disbursed by the government.

The lockdown, enforced in the country in 2020-21, became another major opportunity for the government to deny MDM Cooks of their rights. The government left the MDM cooks without any money in the lockdown under the pretext that all schools were closed and meals were not cooked. The Rasoiya Sangh announced a protest action in front of the Jharkhand Assembly during the budget session in March, 2021. Intense campaigns were organised throughout the state demanding payment in lockdown period. Due to the powerful intervention by the union, the Jharkhand government had to agree to pay their dues for the lockdown period. The government also had to declare an increase of the honorarium by Rs 500 per month making the payable honorarium to Rs 2000 per month to every MDM cook. This increased amount has been implemented from April, 2021.

The union continued to intensify the struggle of the MDM cooks for proper salary and dignified work condition. A massive protest action of the MDM cooks were organised during the monsoon session of the Jharkhand Assembly in September, 2021. More than 1000 cooks participated in the protest from all over the state despite heavy rain on the day of the protest. The increased intensity of their struggle ensured immediate release of payment of the pending honorarium of two years for MDM Cooks in Sahibganj district.

The unionisation of the MDM Cooks is fast expanding in different districts of Jharkhand. District level committees of the Rasoiya Sangh are being formed right now and a State Conference of the Union will be held in October-November of this year. π 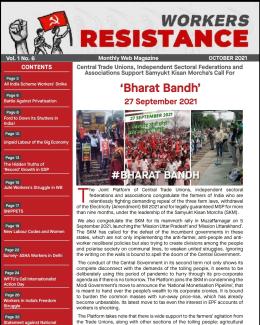