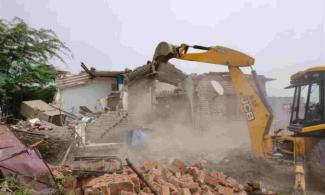 Soon after the demolitions, the residents mobilized themselves for a demonstration outside the DDA office on 10 August, under the banner of the All-India Council of Trade Unions (AICCTU). Displaced people from Dhobi Ghat, Kasturba Nagar and Laxmi Nagar also joined this demonstration. All of them expressed their anger at the stark injustice meted out to them.

The sense of injustice stems from several factors. First and foremost, the very fact that working people have to lose their homes in a city which is built by their labour, appears unfair. Even more so when the rich remain safely nestled in their safe houses, neighbourhoods, and playgrounds. Within a day of the demolition at Gyaspur, the thousand odd people who had lost their homes, saw the Bhartiya Janata Party (BJP) Member of Parliament (MP) Gautam Gambhir arrive there in order to inaugurate a recreational Bamboo Park. This rubbed salt to their wounds. Adding to all of that, the government’s refusal to provide any rehabilitation or even give the residents some more time to find suitable alternate accommodation, have angered them further.

This demolition happened close to the independence day, when the BJP was running the har ghar tiranga campaign. Many displaced residents wondered what this kind of independence celebration meant when people were forced to fight for their basic rights of access to food, cloth, and shelter. Subsequently, a joint demonstration – involving AICCTU, Mazdoor Awas Sangharsh Samiti, Working Peoples’ Charter, and other organizations – was held at Jantar Mantar on 6 September on the issue of housing and displacement. The organizations demanded an immediate stop to all demolitions and provision of rehabilitation for the displaced.

The displaced residents of Gyaspur have wondered ever since the DDA pasted notices on 6 August why the Delhi High Court did not stand by them. Common citizens and media people who joined the above-mentioned demonstrations also seemed a bit baffled by the court’s stance, especially after listening to the powerful speeches made by the displaced people justifying their claims. A close look at the Delhi High Court Order vacating the stay on demolitions at Gyaspur gives us a sense of the judiciary’s mood.

The DUSIB (Delhi Urban Slum Improvement Board) rules categorically state that any resident of a slum who has been staying in the area from before 2015 cannot be evicted without proper rehabilitation. The DDA has adopted the policy. Moreover, the Delhi High Court Judgement of Ajay Maken vs Union of India of 2019 states that no one can be evicted without first being provided with rehabilitation. The Gyaspur judgement acknowledges these provisions but notes:

More importantly, by definition in the statute itself, notification by DUSIB is an essential pre-requisite to be qualified/recognized as a jhuggi jhopri basti for the purpose of the Act and the 2015 Policy. Admittedly, no such notification has been issued qua the clusters/settlements of the petitioners. As such, reliance placed by the petitioners relying upon the 2015 Policy, or the 2016 Protocol for that matter, is misconceived, for the reason that same is applicable only to such jhuggi jhopri bastis which are duly notified by the DUSIB.

In other words, the burden of the failure or reluctance of the DUSIB to notify these colonies as jhuggi jhopri bastis is slyly shifted on to the residents. Besides, the single judge bench completely justifies DDAs’ stance that the land under consideration must be used for undertaking plantation in order to compensate for the loss of trees due to the impending construction of the Regional Rapid Transport System (RRTS).  The RRTS has been touted as a green mobility solution to curb pollution and congestion. As in the case Khori Gaon, once again we are compelled to ask why the burden of maintaining the ecological balance should fall on the poor. The judgement, towards the end, patronisingly says that the petitioners have argued from a position of sympathy for the poor which may be commendable but deserve to be ultimately dismissed.

In sharp contrast to the legal displacement at Gyaspur, a few months prior to this, Delhi witnessed another displacement drive that was blatantly illegal. This happened at Jahangirpuri in April. Its nature was also different. This was not an eviction to clear land for “development”, at least not in rhetoric. This was an attack on working class Muslims, aimed at strengthening a set of class related and Islamophobic prejudices.

On April 20, after receiving a letter from the Delhi BJP chief Adesh Gupta demanding that they bulldoze illegal encroachments of “anti-social elements and rioters”, the North Delhi Municipal Corporation (NDMC) locked up residents in barricaded lanes and undertook an “encroachment removal” drive in Jahangirpuri, demolishing homes, shops, and businesses, mostly belonging to Muslims.

Just four days earlier, on April 16, a shobha yatra was organised to mark Hanuman Jayanti in Jahangirpuri, which resulted in a communal flare-up. The violence and subsequent demolition drive came at the heels of two similar episodes in Khargone, Madhya Pradesh and Khambhat, Gujarat – where the administration suddenly woke up to encroachments in violence-hit areas.

Soon after the demolitions started, the Supreme Court ordered in an urgent hearing that the demolitions be halted, and status quo maintained. Despite the stay order, demolition continued for over an hour in the presence of the NDMC Mayor and Delhi police.

Aside from the blatant defiance of the country’s apex court, the demolitions carried out by NDMC violated established law and principles, and the fundamental rights of those affected. Anmol Gupta, Jeff Joseph, and Mukta Joshi explained this further:

First of all, none of the applicable state laws – the Delhi Municipal Corporation Act, 1957 or Delhi Development Act, 1957 – allow the government agency to demolish buildings and structures without giving an advance notice to the affected parties….

…Since houses and other permanent structures were targeted in the demolition drive, serving an advance notice under the Section 343 was an obligation ignored by the NDMC.

The Supreme Court had ruled in 1985, and upheld in subsequent cases, that not serving notice to affected parties violates “the principles of natural justice”, and any departure from the due process of law results in an unjust decision.

The picture that we find here of slum demolitions is a complicated one. The intention behind the demolitions tend to vary, as do the stances adopted by the courts. However, in both the cases described above, at stake is nothing but urban property. The situation in Delhi and beyond suggests that as urbanization increases, land becomes more scare and the environment becomes vulnerable, land wars appear to shift from villages to towns small and big, to the cities and to urban peripheries.

The continuation of pro-elite development policies means that it is the poor and working people who bear the burden of development through displacement. At the same time, Hindu supremacist forces have used these land and property wars to further exclude already marginalized Muslim populations. Given this context, no wonder housing has emerged as a major social and political question in urbanizing Delhi.

Political organizing in urban and semi-urban spaces by democratic forces with a keen eye on the shifts in political economy and ecology is the need of the day. Such organizing requires a careful navigation through the corridors of legality and its margins. It also requires creative alliances between struggles around land and labour, around identity and property. In that context, the question of housing also assumed a wider significance that includes the question of displacement but also goes beyond it, cutting across castes, classes, and identities.  On this point, Sushmita Pati rightly suggests:

The problem with only invoking rights with respect to demolition is also that it reduces the housing question to a state vs. people position. There is a dire need to acknowledge that housing rights is a far wider and a far more complex issue. It includes banks, governments, real estate agencies, brokers and also landlords; and these actors, especially local ones, can vary significantly across the country.

Rents are governed by arbitrary rules, not laws. Steep and arbitrary rents have affected people’s quality of lives across classes and cities. Homeowners often band together in the form of Resident Welfare Associations across Indian cities which often become vehicles of arbitrary and discriminatory rules as to who can rent in a neighbourhood and who cannot. And more often than not, these lines are drawn on the lines of caste, religion, and even marital status.