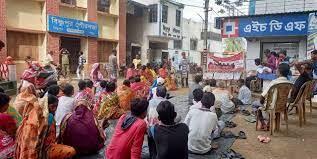 For a long while, the sanitation workers of Bishnupur Municipality are being deprived of payment of their ad-hoc bonus. Last year, the West Bengal government announced an ad-hoc bonus of rupees 4500. However, the workers actually received only rupees 1,200 in hand. To avail the full amount of the bonus this year, 'Bishnupur Pourasabha Sangrami Sromik Karmachari Union' decided to organize a powerful protest. The Union started a dharna in front of the municipality gate on 12th September 2022 with a set of demands, including demand for minimum wages based on the government order; for making the casual workers permanent by preparing graduation list; for providing identity cards and job-related documents; for priority in recruitment to the family members of sanitation workers in the municipality; for an additional attention on maternity benefits.

The Bishnupur Municipality sanitation workers are steadily and strongly carrying on their movement by organising themselves under this newly formed union for the last 2 years. They have organised demonstrations before the local SDO office, blockaded the Assistant Labour Commissioners' office several times, and even gave a call of 'Bankura DM Office Chalo' by forming a forum of all sanitation workers of Bankura municipality. They made the call successful by organising more than 500 sanitation workers at the rally to the DM Office. In the month of December last year, the workers went for an 8-hour long 'Dharna' in front of the Bishnupur municipality office to get a justifiable wage and bonus along with other demands.
Despite all the hurdles and barriers created by the administration and police before the protest, the workers marched on firmly. Finally, the authorities had to bow down before the steadfastness of the sanitation workers and made a verbal announcement of payment of rupees 4,800 as ad-hoc bonus. These empty assurances were not really trusted by the workers as their memory of past betrayal was ever fresh. Therefore, the workers continued their protest against the authorities as per the pre-scheduled date of the 12th September.

The union Secretary Com. Dilbar Khan in his speech stated, "We thank our municipality authorities for promising 4,800 rupees as ad-hoc bonus but we will be forced to continue the struggle if our other demands are not fulfilled. If any kind of breach or betrayal occurs, then we will have to go for an emergency strike. Hence, my request to all my beloved citizens is to stay with us and stand with us in our struggle to reclaim our dignity."

The union president Comrade Farhan added, “The result of the 'ceaseless protest' is positive and we experience it very often. Just 2 years before, sanitation workers of Bishnupur got nothing. Now, they have gained 33% wage rise and regularity of payment within the first 10 days of a month because of their struggles. Even Maternity leave was not available earlier, they have snatched it from the authorities now. Four holidays in a month with payment, and Emergency Health Leave have also been granted now. But the big question is that of 'Permanency and Recruitment'. Thus, to ensure that the priority is given to the sanitation worker's family members in recruitment, we will continue both our peaceful and agitative demonstrations. This movement is intertwined with the movements of the youths sitting for over 500 days on the issue of employment at Dharmatala; movements that demand 200-days of work in rural Bengal; farmers movement seeking MSP, subsidised fertiliser, pesticides; and with the movement of landless people who demand land and housing in its larger aims and objectives.”

The Protest began with remembering sanitation workers whom we lost in the recent past. The West Bengal State Secretary of AICCTU Com. Basudeb Bose joined the protest, accompanied by the district President Com. Bablu Bannerjee, Secretary of Medinipur Pourasabha Sangrami Sromik Union, Com. Tapan Mukherjee and veteran civil rights activist of APDR and Com. Bani da. Com. Prantik from RYA recited a poem that he wrote on the plight of the workers. Com. Biltu khetrapal, the Vice President of the union and Com. Titas, an AIPWA leader were also part of the protest. n