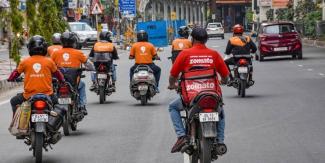 Food Delivery workers for app-based platforms like Swiggy and Zomato have started taking to social media platforms to air their grievances against the company. The allegations point to exactly the opposite of what the gig-economy and its champions claim. Instead of freedom to work anytime and anywhere that is proclaimed by the platform companies, workers are subjected to an algorithmic surveillance regime that scrutinizes their every move. Let us take a look at the concerns raised by the workers themselves.

While the platforms claim that workers are ‘free’ to choose when and where they work, the reality is that delivery workers have to wait in their respective ‘zones’. If they leave their zones or do not move as fast with the delivery as the platforms expect them to, they are constantly harassed by the company’s IVR calls. Similarly, the workers have to wear clothing that has the company’s logo printed on them and must log in at predetermined ‘work-hours’. The claim of ‘freedom to work’ that these companies supposedly provide their ‘delivery executives’ is clearly a lie.

Despite the skyrocketing cost of fuel, food delivery platforms have failed to compensate their workers to the extent that some deliveries even cost them money. The charge collected from the customer as a fee for the delivery partner, is not reflected in the delivery partner’s income in several instances. In many cases, the workers receive less than Rs 20 per order even though the platform companies claim that such low compensations are ‘unrepresentative’ of the general pay received by the delivery executives.

Lack of Job Security and

The ‘delivery executives’ working for the platforms are not accorded any rights as ‘workers’ and are regarded as ‘partners’ by the platform companies. Asking too many questions or raising a voice against unfair payouts can result in the ‘partners’ having their IDs cancelled. Many workers have claimed that their IDs were cancelled without any explanation or without giving them a fair chance to state the problems that they had faced during the deliveries or dispute a complaint lodged against them by a customer. Many of the food delivery workers had taken loans from banks in order to buy bikes to join work and had no other way to pay back their loans than to continue working under such exploitative conditions. Yulu Bikes have been promoted as a ‘green’ alternative to regular bikes, but the serious flaws in safety features have meant that more profit could be extracted from the delivery workers without adequate compensation. Unsurprisingly, Yulu bikes have been involved in accidents met recently by food delivery workers. Incentives for faster deliveries have also meant that the workers are incentivised to take unnecessary risks while delivering leading to accidents.

There are attempts to discriminate against Muslim delivery workers by customers. Workers have also noted how they are not allowed to be visibly present in ‘posh’ spaces like shopping mall food courts, despite their work often requiring them to pick up deliveries in these places. Housing complexes and societies too often prevent delivery workers from entering and require them to wait outside the gates. Other workers have protested against police harassment, especially as police find food delivery workers to be particularly soft targets for extorting bribe as they are helpless and cannot afford to delay deliveries. Delivery workers have been victims or road rage and harassment by customers with little or no recourse for their situations.

The problems that the food delivery workers are facing are ones that are reflected at various levels across the gig economy. In fact, while the platforms claim to use innovative technology to provide services and generate employment (while denying simultaneously that the workers are employees), the main ‘innovation’ that they engage in is bypassing labour laws by contractualizing the majority of their employees. A report by the Boston Consulting Group predicts that around 24 million jobs in the formal sector could migrate to the gig economy over the next few years resulting in greater employment insecurity. Gig workers in Europe have, in particular, been attempting to unionize and have their status as workers recognized by the European governments rather than the contractual self-employment that governs them now. The response by the gig economy platforms of threatening to shut down all operations or attempting to change laws that would require them to pay minimum wages demonstrate exactly how the entire business model relies on exploitative labour practices.

Given the growing trend towards digitization of employment and work, there is an immediate need for labour unions and governments to regulate the ways these platforms operate. The key demands include -

The government should recognize those employed in the gig economy as employees rather than as ‘partners’, extending workers’ rights to them.

Gig platforms must rationalize and clarify the structure of payouts and incentives for gig workers, taking into account waiting time and fuel cost, and a standardization of delivery time based on experience of the workers.

Constitute a dedicated dispute resolution mechanism in order to ensure that in the event of a conflict, the worker has a right and opportunity to state his side.

Extend unionization rights to workers and provide protection from unfair cancellation of IDs.

Provide all workers with social security benefits with clear guidelines for contribution from aggregators. π