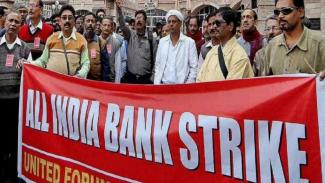 As millions of the people in the country are battling for life every day in the second wave of Covid-19 upsurge, the NITI Ayog and the Finance Ministry are finalising plans to privatise selected Public Sector Banks (PSBs). This comes as part of the 1.75 lakh crore disinvestment plan for the 2022 financial year. Disinvestment or sell out of Public Sector Undertakings (PSUs), that the country had built over the years since independence, is the most important marker of the disastrous Modinomics. After several PSUs being put up for sale, now it is the turn of the Public Sector Banks to be sold out. The merger of several PSBs as we have seen since 2014 were the background work done for privatising them.

Modern Indian banking sector, as evolved during colonial period, was largely in the form of badly unregulated private banks which used to get busted too often, leading to loss of savings of ordinary Indians. In order to safeguard people’s money from failing private banks and to provide bulwark to savings of ordinary citizens, 14 banks were nationalized after independence in 1969. To give further boost to expansion of banking, especially in rural areas, six more banks were nationalized in 1980. After merger of two PSBs the number of total PSBs in India stood at 19 for a long time.
Nationalisation of banks was a major policy decision in India that helped ordinary citizens of the country to rely on the banking institution. It made banking system accessible in every region of the country. People’s hard-earned money became safer with the assurance of government’s protection. The number of total branches of scheduled banks in the country increased from 8,187 in 1969 to 59,752 in 1990. Among these, rural branches increased from 17.6% in 1969 to 58.2% in 1990. The number of branches kept on increasing even after polices of liberalisation were adopted in 1990s. As on March 2015, India had 1,20,000 bank branches in the country with considerably proportional distribution in rural, semi-urban and urban areas.
Nationalization also helped in priority sector lending by banks to sectors like agriculture, education and small and medium enterprises. The rapid expansion of the banking system led to resource mobilization by banks which, in turn, contributed to higher savings rate. The Credit-GDP ratio of banks also witnessed a sharp rise from single digit at the time of nationalization to more than 50 percent in decades of 2010s. The policy of No-Frills account, 90 % of which were opened by public sector banks from 2005 to 2012, made banking system accessible to small depositors. 139 million No-Frills account were opened in the above mentioned period. The total combined profits of PSBs for FY 2013-14, just before Modi government assumed power, was to the tune of Rs 37,393 Crore. The backbone of these profit making PSBs have been systematically broken since then, by the Modi Regime. And these banks are now on the verge of being sold out to private hands.

The Why and How of Banking Disaster under Modi Regime

‘Modi hai to mumkin hai’ (the impossible is possible if Modi is there) was the flagship slogan of the BJP’s 2019 election campaign. Pushing profit making PSBs into losses is probably one of the most tragic implications of the slogan.
From its very inception, the Modi government has been preparing grounds for justifying mergers and eventual privatisation of PSBs in the name of credit quality review. As has been mentioned earlier, the public sector banks were reporting good profits during FY 2013-14 when BJP govt assumed power.  The gross Non Performing Assets (henceforth NPAs) of PSBs were at Rs 2.19 lakh Crore (only 4.35% of Gross Credit) in June 2014. NPAs are by definition assets or loans, on which the repayment of installments have remained due for 90 days or more.  After Modi Govt assumed power in 2014, the NPAs jumped to 8.97 lakh Crore (14.5% of Gross Credit) in March 2018. While one of the reason for it may be the continuous decline in growth rate of Indian economy due to faulty macro-economic policies such as demonetisation, GST and reduction of fiscal space for government spending. The combined effect of all these policies has resulted in reduced growth numbers, huge job loss, increasing economic inequality, and falling aggregate demand. Under this economic circumstance, what was once a good financial asset may have turned into non performing due to inability of an ordinary borrower to repay the credit.
The inability of an ordinary borrower is only a small part of the story of piling NPAs. The main culprit in the story are the big borrowers. According to data obtained from RBI in 2019, India’s top 30 defaulters account for a third of the total NPAs in the banking sector.

It is thus amply clear that the PSBs that are showing operational profits, are facing losses because of sky rocketing NPAs. Now the question arises as to what has the Modi government done to address the NPA crisis of banks? Has it made corporate borrowers accountable for the rising NPAs in banks? Has it invoked legal provisions to ensure that the corporates stop looting public banks by not paying back their huge loans? The answer is an absolute NO. The Modi government has continued to ensure credit flow from public banks to corporations despite the emerging banking crisis. Like all other economic policies of the Modi government, its banking policy has also been driven by the intention of ensuring profit to corporates by diverting earnings of ordinary people to their accounts. And now, the crisis created by the pro-corporate policy regime is being used as a justification to merge and sell out Public Sector Banks.

The pro-corporate policies of the Modi government is solely to be blamed for the NPA crisis. Shifting the blame of banking crisis to the functioning of PSBs themselves is a mischief very cleverly done by pro-corporate economists and political dispensations.

We must remember that it is the PSBs which fulfill their corporate social responsibilities to the country such as financial inclusion of the most marginalised and priority sector lending to agriculture, education and small enterprises. We need our banks to be a part of the project of financial inclusion and upward mobility of the marginalised. The private banks are solely driven by profit motive. They have no accountability whatsoever for those who remain excluded in a market driven economy. We can not let our Public Sector Banks, that have played undeniable role in nation building for so long, to get sold out just because the Modi regime wants to satisfy few of its crony corporate friends.