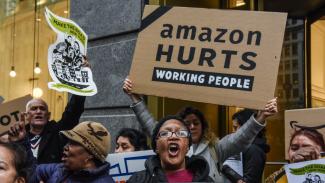 Amazon started in 1994 as an online bookseller and distributor. Since its founding it has become one of the largest corporations in the world with a market capitalization of 1.7 trillion dollars. It has 1.2 million part -time and full-time employees. There are 1093 global Amazon facilities (per data from June 2019), with 477 located in the U.S and, notably, 331 located in India. The exact numbers of data centers for Amazon Web Services (AWS) are not available but are estimated to be 36 in the U.S. and 3 in Ireland employing 10,000 people.

Amazon was leasing jets for its operations until January this year when it announced that it was purchasing Boeing 767-300 jets for its operations. It has 20,000 Mercedes Benz vans which it leases to drivers who are called 'partners'.  According to Politico, AWS has hired at least 66 former government officials, more than half of them from the Defense Department. AWS received a $600 million deal with the Central Intelligence Agency 8 years ago to provide cloud services. This year the National Security Agency awarded a 10-billion-dollar cloud computing contract which has been challenged by Microsoft. In India, Amazon's total revenue in 2018-19 (Economic Times data) was 1.59 billion dollars. It has many retired military veterans in managerial roles in its operations in India and has been working with the Indian state with goals to hire 25,000 more army, air force and navy veterans by 2025.

The Institute on Taxation and Economic policy (ITEP) reported that Amazon in 2020, during the pandemic year, made 24 billion dollars in its worldwide income before tax which was more than in 2019 when its pretax income was 14 billion dollars. While the average American pays 14% in taxes, Amazon paid an effective tax rate of 9.4% in 2020. The U.S. government in 2017 in keeping with its class character lowered the corporate tax rate from 35% to 21%, in addition corporations like Amazon have enjoyed several tax credits and breaks. ITEP reported that Amazon received tax subsidies of 7.4 billion dollars from 2018-2020. An economic development watchdog has calculated that Amazon has received 4.1 billion dollars (source: Good Jobs First) in incentives for its warehouses and data services from different states in the U.S. and the federal government since 2012.

Jonathan Rosenblum wrote in the Jacobin "Amazon embodies the next iteration of monopoly capitalism, but presents a challenge a couple orders of magnitude greater than the mass production systems of the last century".

While it is a daunting task to organize against Amazon there have been some small victories in the fight against this vicious anti-union and anti-worker corporation in the last few years in the U.S and in Europe. Make Amazon Pay is a coalition of more than 40 grassroots organizations that have come together to coordinate actions and strikes against the behemoth. The coalition has been highlighting the extensive operations of Amazon from oil refinery in Latin America to garment industries in Bangladesh and Cambodia. “Amazon is able to build power by operating on a global level without opposition,” Casper Gelderblom, a Dutch trade unionist with Make Amazon Pay, told The Intercept in the fall of 2020. “We have to match the transnational scope of its organization with an internationalist strategy.” In March 2021 there was a general strike in Italy by the Amazon warehouse workers. 75% of the 19,000 Amazon drivers participated in the strike. Amazon Italia signed an agreement in September 2021 with trade unions to engage with them in the running of operations which was considered a positive outcome of the strike.

Amazon worked with the New York Governor and Mayor in 2019 to build a headquarters in Queens, New York. The deal would have given 3 billion dollars to Amazon in incentives in a city where public housing is in a crisis and there are more than 50,000 homeless people. Mass movement of grassroots organizations and unions opposed this and ultimately won which led to Amazon withdrawing its plans.

The Amazon warehouse in Bessemer, Alabama early this year witnessed a spirited unionizing drive. Out of the roughly 5900 workers in this warehouse, 85% are estimated to be Black. The Retail, Wholesale and Department Store Union (RWDSU) which led the union drive described it as a civil rights struggle for dignity in addition to labor rights. Amazon launched a major campaign of intimidation of workers as part of its well-known union busting efforts. In April, when the election to form a union was held, sadly, Amazon scored a victory. Only 50% out of the 5900 workers cast their votes in the election. There were 738 votes in favor of the union and 1,798 votes against unionizing. This was a temporary setback to the labor movement in the U.S. and to organizing workers in the other Amazon warehouses in the world. The RWDSU contested the election result with the National Labor Relations Board (NLRB). The NLRB last month ordered a new union election at the warehouse in Alabama, upholding the union challenge that Amazon's actions did not lead to a fair election process. RWDSU hailed the decision as a victory. RWDSU president Stuart Appelbaum said...“that Amazon’s intimidation and interference prevented workers from having a fair say in whether they wanted a union in their workplace.” A new date for the election to have a union represent the workers has not been decided yet.

The International Teamsters Union in the U.S. which represents 1.4 million workers including truck drivers and warehouse workers passed a resolution this year recognizing unionizing Amazon as one of the organization’s top priorities. This is a very positive development, the labor movement in the U.S has welcomed this decision. After months of organizing at Staten Island Amazon warehouse the Amazon Labor Union which is not affiliated with any major union withdrew its petition for unionization vote as it was unable to gather 30% of signatures from the workers.

While the road to organize workers at Amazon full of obstructions, there have been small victories. Kshama Sawant, the progressive Seattle City Councilor, from Socialist Alternative, led Tax Amazon ballot initiative. The Seattle City Council in July 2020 passed the JumpStart Tax, a payroll tax on the city’s biggest businesses and highest earners, including Amazon which was a major blow to the corporation. Sawant was accused of using city resources to support the ballot initiative. In May 20021, she had to pay a fine to the Seattle Ethics and Elections Commission. She said she was unaware it was a violation. For 16 months there was a concerted effort by the capitalist class to have her face recall for "misfeasance, malfeasance, and violation of the oath of office." On December 17 this year, she officially defeated the right-wing recall effort, she said, " "We have defeated Big Business and the right wing in their attempt to use... trumped-up charges against me personally in order to push back against the success of working-class movements in Seattle."

The U.S. has had a burst of militant strikes this year from healthcare workers, Kellogg's cereal workers, theatrical stage employees to agricultural and heavy machinery workers. Although these strikes have largely been for better wages and work conditions, they have the potential to elevate the political consciousness of large sections of the population. The fight against global corporations like Amazon can succeed only by bridging the labor and community struggles for social justice and building transnational solidarity movements. νν