Bank Strike and After 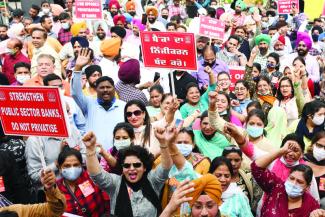 The Narendra Modi government at the centre has learnt its lessons from the resounding setback to its policies given by the farmers’ agitation. For now they have decided that discretion is the better part of valour. In the face of mounting resistance from the bank employees they have desisted from introducing the Banking Laws Amendment Bill, 2021 in the winter session. Bank strike on 16 and 17th December was a huge success. Barring some new generation banks in some cities, the shutdown was complete. This has forced the government to retreat,  at least for the time being.

This bank strike was unique in many ways. According to Kamal Bhattacharya, veteran leader of the AIBEA, the most conspicuous aspect was the massive participation of young employees, both men and women. Obviously the unending chatter about privatization has made the young generation of bankers feel insecure and they have come out in huge numbers to thwart this nefarious move of the government. Another welcome development was the solidarity extended by not only the employees of many financial institutions like RBI, NABARD, and various insurance companies but also the employees of BSNL, power and defense sectors. Obviously no public sector employee is feeling secure in this claustrophobic situation of wholesale sell and privatization that has been initiated by the Niti Aayog.

There has also been a perceptive change in aam aadmi’s attitude towards a bank strike. Thanks to the relentless negative propaganda by the government, public has generally thought that bankers struck work only for their own benefits, regardless of the problems it caused the customers. But times are achanging. People are realizing that with privatization their hard earned money will no longer be as secure as it used to be in PSBs. They have seen how the customers of private banks like IDBI bank, YES bank, LAXMI VILAS bank have suffered when their banks had turned sick. They are asking why the prime minister is continuously harping on raising the insured amount kept as deposits in banks to Rs 5 lakhs, which was Rs 1 lakh earlier. So is there a real chance of banks failing, as it used to happen regularly during the pre-nationalisation days? What happens to the deposit above Rs 5 lakhs which many customers have? Will that  amount be forfeited? Will that amount be used to ‘bail in’ or rescue the bank in case it fails? These fears have made the customers jittery. Some civil society groups sprang up in support of the strike. In Kolkata an initiative called ‘Bank Bachao, Desh Bachao’ held joint rallies with the bankers.

But there is no room for complacency. We have seen that this government can stoop to any level to subvert the democratic process. It can bring in an ordinance and get the bill amended through the back door. And of course it can introduce the bill in the budget session. So the movement will continue, with more vigour, assured Bhattacharya. As of now AIBEA will support the industrial strike on 23-24 February.

AICCTU congratulates Bank employees and officers for grand success of the two days united All India strike on December 16 -17, 2021  against the government's bill on the privatisation of public sector banks. We hail the spirited participation of young and women employees in the strike. We Salute the consistent united struggle of bank employees and officers under banner of United Forum of Bank Unions(UFBU).

We firmly stand with the Bank workers and their struggle and demand recovery of huge bad loan from corporate house and withdrawal of proposed Banking laws (Amendment) Bill 2021.Modi government's move of Bank privatisation enable private companies to gain direct control over the massive financial resources generated through public savings.The working class will never accept Modi government's policy of reversal of nationalisation. The determined, tireless movement of farmers with popular support has forced the Modi government to beat a retreat on the pro-corporate farm laws. Now, the disastrous move of bank privatisation must be stopped by the united struggle of bank employees with the support of common people.

Let us all heighten the struggle to force Modi government to repeal the Bank Privatisation Bill.