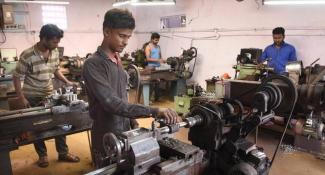 The International Labour Organization recently released a report on the impact of the COVID pandemic on enterprises and workers in the formal and informal economy in India. This report, which essentially focuses on Micro, Small and Medium Enterprises (MSMEs) in India, has tried to capture various aspects of the trajectory of the MSME sector in India during the pandemic. It looks at turnovers, outputs, deviations in income, job losses/retentions, nature of financial problems faced, shifts in supply chains, shifts in labour profiles in the sector, institutional support (or its absence) to enterprises and workers. Given that the report tries to capture one of the most traumatic episodes in the Indian economy in the recent past, its significance cannot be underestimated. There is, after all, a crying need to document the actual state of affairs. As we shall see, the ILO report reveals some of aspects of the chaos wrought by the pandemic as well as the abysmal state of the government’s response to the same. However, the report also suffers from certain methodological as well as analytical limitations, which we shall see.

Significant Conclusions of the ILO Report

The ILO report focuses on MSMEs because this sector is a major source of employment in India, and any jolt to this sector has a cataclysmic as well as spiraling impact on the economy. There are an estimated 63 million MSMEs in India, most of them micro units. There is a huge variety amongst these MSMEs, in terms of what work they are engaged in, how many workers they employ and the scale of operations. Th ILO study is based on a very small subset of the total number of MSMEs in India. It has analyzed approximately 500 MSMEs each in Maharashtra, Tamil Nadu and Uttar Pradesh (1525 MSME owners and 3111 workers were interviewed for the report). These states were chosen because they host a substantial section of MSMEs in the country, and the efforts were made to select a sample which is representative of MSMEs in the country. Qualitative interviews were conducted with key stakeholders of the government, the trade unions, and NGOs. The study looked at two questions: firstly, what was the impact of pandemic-related disruptions for both MSME owners and workers, secondly, how effective was the institutional response to these disruptions? Did governments step in to address the disruptions? What were the policy measures and to what extent were they accessible?

The first major pandemic-related disruption was the lockdown announced in March 2020. Both enterprises as well as workers suffered as a result. Supply chains were disrupted, lakhs of workers lost their source of income. The ILO survey was conducted in October 2020, many months after the lockdown. However, the survey reveals that the impact of the lockdown continued in many ways, even though many units had started their operations. 92 per cent of the unit owners said that the lockdown had impacted them. The closure of the enterprises had a cascading effect and impacted their cash flow, supply chains, and availability of labourers. At the time of the survey in October 2020, 65 per cent of the enterprises had started normal operations.

Even when units managed to continue operating, they faced multiple problems. Many units could not pay salaries, could not purchase raw materials, had to deal with reduced demands. Many were struggling to repay loans; many units had to keep paying rents even through the lockdown. Again, there were regional variations – these issues were more acutely reported in Tamil Nadu and Maharashtra and 80 per cent of the small enterprises and 60 per cent of the micro- and medium-sized enterprises in the services sector mentioned this. Many units also reported a significant decline in turnover. Nearly 75 per cent of the units mentioned that their turnover had declined by 30 to 90 per cent compared to a three-year average. A majority of units also reported in October 2020 that they needed another 3 to 6 months to return to the pre-March 2020 level.

As was expected, the workers in the MSMEs bore the brunt of the lockdown and the subsequent adverse impacts. This is because the most common coping mechanism reported by MSMEs was permanent (12.4 per cent) or temporary (33.3 per cent) laying off of employees. 45 per cent of the enterprises laid off workers either temporarily or permanently. There was a 25 per cent reduction in the number of labourers employed. The reduction was 36 per cent in Maharashtra, 32 in Uttar Pradesh, and 18 per cent in Tamil Nadu. Moreover, there was a gender dimension to this phenomenon. More women workers were laid off, in proportion. There was a 54 per cent reduction in the number of women workers employed in Maharashtra and 37 per cent in Uttar Pradesh. Across the states, the number of enterprises not engaging any labour increased from 5 per cent before March 2020 to 17 per cent at the time of the survey. Again, the number of enterprises indicating no labour increased significantly in Maharashtra and Uttar Pradesh compared to Tamil Nadu. The number of enterprises not engaging any women labourers increased from 59 per cent to 65 per cent across the three states. In Maharashtra, it increased from 60 to 73 per cent. Most of the enterprises that have laid off workers are from the service industry including enterprises that repair goods, electricity, gas and water supply, hotels, transport, and real estate. Apart from retrenchments, MSMEs resorted to other mechanisms such as more shifts, paid and unpaid leave, loans to workers, decreased salaries, overtime, change in working arrangements, provision of health insurance and organizing transport. Here again, Tamil Nadu performed much better than other states when it came to helping workers; for instance 43 per cent of units in Chennai and 29 per cent of units in Tiruppur provided transport to its workers.

Apart from severe job loss and insecurity, workers had to deal with institutional apathy. There were very few policy initiatives offered, and the access to these initiatives was very limited. According to the ILO survey, 85 per cent of the workers do not have access to any social security. Even those who consider themselves full-time workers have no access to any security. The majority of these were in Uttar Pradesh and Maharashtra. The report points out that while the government had initiated some schemes to alleviate the impact of the pandemic, these schemes were not successful. For example, even though most units stressed that they desperately needed access to easy loans, only 15 per cent of enterprises had accessed business loans. 60 per cent did not apply or did not receive any support. This is when 43 per cent of units reported that they had not been able to repay loans, 38 per cent were struggling to pay rents and 47 per cent were struggling to pay salaries. The proportion of those who did not receive any support was significant across all three states, though Tamil Nadu shows a slightly better track record. Of those who did not avail or receive any support, many were not aware or felt that they might not get it. The support for workers was very limited too, as pointed out by the ILO report.

Free ration was provided by and large by trade unions or civil society organizations, and to some extent under the Pradhan Mantri Gareeb Kalyan Yojana. A very small amount of Rs 500 was transferred to some workers through the central government’s Jan Dhan Yojana, and even here, workers in UP benefitted from this scheme compared to workers in Maharashtra or Tamil Nadu. The report states that there is no database of workers, and this limits the efficacy of governance schemes. But the fact remains that even if a database were to be available, the amount that the government is offering as support, Rs 500, is a cruel joke. This is barely above the daily minimum wage for a skilled worker, and to see this amount as ‘support’ is an outrage. Again, the government is offering a mere Rs 1000 to an MSME enterprise as ‘support’ for reopening. This is yet again a farce and a cruel joke. Overall, the government has completely failed to provide the much-needed low-interest/interest-free loans, tax breaks and relief from rents etc. One sees a structural and institutional apathy at work.

Limitations of the ILO Report

The ILO report suffers from some severe limitations. To begin with, it focuses on a very small subset. Even if there were to be representative of the MSME sector, the fact is that it only captures the first COVID wave. The survey does not cover April-June 2021, during which large parts of the country was brought to its knees by the pandemic. Therefore, the gloomy results reported are likely to be a gross understatement.

Also, the report does not hold the government accountable on multiple occasions. There is just a passing mention of the fact that even prior to the pandemic, the MSME sector was reeling under the twin assaults of demonetization and the rolling out of the GST regime. The report does little to critique the very structure of government schemes that offer a piddly Rs 500 to workers and Rs 1000 to individual MSME units as ‘support’. In other words, the focus of the report is on implementation. That being said, the fact of the matter is that even such a report exposes the tremendous blow faced by the formal and informal MSME sector in India. νν