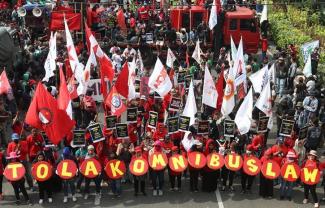 An Indonesian Constitutional Court on 25 November 2021 ordered President Joko Widodo to amend parts of the controversial Omnibus Law. The law aimed to dilute the county's previously existing labour, land acquisition and environmental laws in favour of "attracting more foreign investment."  The term Omnibus comes from Latin and means "to, for, by, with or from everything". The Omnibus Law thus brings various legislations under a single document. This is similar to India's new Labour Codes that will replace various labour laws into four codes, and works under the similar model of free access to corporates.

Ever since the Omnibus Law proposal was put forward by President Widodo in 2019, trade unions and environmental groups have been protesting against the law. A series of protests and resistance actions were organised across Indonesia, with workers terming the law as an attempt by the government to trample workers’ rights and guarantee corporate profits. More than 400 workers and activists were arrested during the strikes and protests in 2019.

The Omnibus Law abolishes minimum wage by sector, and also removes the fines for companies who delay payment of wages.  Under the law, the allowed overtime will be increased to a maximum of four hours in one day and 18 hours a week. Also companies will only be required to give workers one day off a week instead of two.

Further, the law makes it much easier for companies to remove a worker from the job, including denying recourse to an industrial relations dispute agency, and it effectively permits indefinite contract work.

The law is also an attempt to break trade unions and the right to collective bargaining as it allows companies to negotiate contracts with employees individually. As a result, workers’ rights to engage in collective wage bargaining will be effectively expunged.

The law also dilutes the previously existing environmental standards. Now, businesses only have to file an environmental impact analysis if their projects are considered high risk.

The Neoliberal Vultures Over Indonesia

Corporate and neoliberal financial institutions had for long been preying on the Indonesian workforce. During the economic crisis in 1998, the country received support from the International Monetary Fund (IMF). As a precondition for the loan, the IMF demanded that the Indonesian government implement a 'structural-adjustment program,'  a framework often used by the IMF and the World Bank to break trade unions, enslave workers and keep them without any rights, and to hand over public resources to private companies.

The ground for this neoliberal assault was laid way back in the early 1960s itself, with the beginning of the 'New Order'. The Suharto era witnessed a Western backed genocide of more than 5,00,00 communists, trade union activists and workers across Indonesia. The United States and other western countries provided full support to Suharto's killing campaign and the US government even provided a list of communist organisers to Indonesian death squads.

Prior to the Suharto dictatorship, the then government of  President Sukarno with the support of the Communist Party of Indonesia (PKI) had outrightly rejected the attempts by the World Bank and IMF to intervene in the South East Asian country's economy. Rejecting World Bank aid, Sukarno confronted the US ambassador before a mass rally in Jakarta with the cry: "Go to hell with your aid!"

Soon after, Sukarno's government was overthrown in a military coup organised by Suharto in 1965. In 1966, Suharto reversed all the nationalisation measures of the Sukarno government. In 1966, when the massacre campaign against workers and peasants was at its peak, Suharto adopted a "stabilisation plan" proposed by the IMF. As witnessed globally, the drastic impacts of neoliberal policies led to rising prices, food shortages and increasing unemployment in the country. In 1998, the sufferings and hardship led to mass protests and ultimately the overthrow of Sukarto's dictatorship. νν