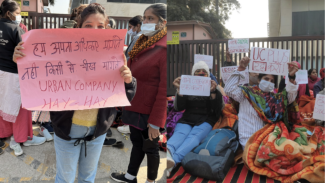 In the October 2021, hundreds of women beauticians registered with the ‘Urban Company’ app, were protesting against low wages and charging of commissions which were as high as 35 per cent. While negotiations between the workers and the Company failed, 50 beauticians have been holding a sit-in strike since December 20th, 2021 outside the company’s headquarters at Gurgaon. The company, in turn, has filed an injunction suit against these women workers seeking that the Court bars the women from holding any “demonstration, dharna, rally, gherao, peace march, shouting slogans, entering or assembling on or near the office premises...”. It also demanded the court to restrict protestors from circulating any messages on WhatsApp or social media platforms, which may damage the reputation of the startup, which is in fact, in reference to the WhatsApp group created by the women workers where they discuss their further actions and coordination in regard to their on-going protest.

The working conditions of forest guards in wildlife reserves is precarious with no job, wage or livelihood security for these workers who perform essential and crucial work of safe keeping of our forests and wild animals, especially tigers, reported The Wire. These guards work on the frontlines and are employed as ‘forest watchers’ in both temporary and permanent posts, with permanent posts being very few. While the expanse of these wildlife reserves are huge, the posts of forest guards are very few, thus putting exponential burden on the few who are there. These guards and beat officers patrol protected areas and territorial forests every day, and implement anti-poaching and other protective activities, and also sometimes collect field data for research purposes. Many of these forest guards have lost their lives on duty, which includes attacks by poachers. They receive very low wages and their payment is delayed as well. The workers in Pakke Tiger Reserve went on strike in 2021 for not having been paid for 7 consecutive months, whereas 140 temporary guards of the Tiger Protection Force at Mizoram’s Dampa Tiger Reserve also went on strike in April 2021 seeking for their salaries which was delayed for more than 6 months. However, the compensation for the risk they undertake to protect our wildlife reserves and for the essential service they render is disproportionate and abysmally low.

3. Maruti Worker Gets Bail after 9 Years

One of the 13 workers of the Maruti-Suzuki Plant, who were sentenced to life imprisonment in 2012 after a workers’ protest at their Manesar Plant was granted bail by the Chandigarh High Court in November 2021. Rambilas, was charged with attempt to murder of a company official and was serving his term in a Gurgaon jail. While the 13 workers were consistently denied bail by various courts, the release of Rambilas was hailed by the workers who continue to fight for their rights even after the 2012 incident. With very few charges against his name, Dhanraj Bhambi was also rejected bail by the Supreme Court in July 2019 and he continues to languish in jail. Since 2012, two of the 13 workers who were serving life imprisonment have passed away in imprisonment. Pawan Dahia died after being electrocuted, while Jia Lal passed away after suffering from cancer. During the pandemic, some of them were sent home on parole which has ended and they are back in imprisonment. νν