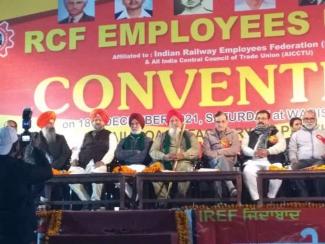 On the occasion of conference of “RCF Employees’ Union” (affiliated to IREF and AICCTU), a workers’ convention was organised on 18 December 2021 in the premises of the RCF (Rail Coach Factory) situated in Kapurthala, Punjab. The well-attended and highly enthusiastic convention was teeming with the spirit of worker-peasant unity.

The speakers while hailing the historic farmers struggle and the historic victory it achieved by compelling the Modi government to repeal 3 farm laws, underlined the emergence of present juncture of growing worker-peasant unity and unity of various sections of common people against the disastrous policies of Modi government and called for further intensifying the united struggles to defeat BJP in the coming Assembly elections and to finally achieve the goal of ousting Modi Regime in 2024. The speakers while hailing the Bank workers for their successful two days country-wide strike (16-17 December) against privatisation and ongoing struggles of various sections of working masses, called for making 23-24 February, 2022 all-India general strike of working class a great success and turning into Bharat Bandh. They emphasised upon further strengthening the communal harmony evolved through the farmers’ movement and the need to remain vigilant against continuing communal and divisive designs of RSS-Modi government.

The convention resolved to intensify struggle against privatisation/corporatisation of Railways and simultaneously strengthen the “Save Railways” campaign among common people. The convention extended full support to the call of all-India general strike and IREF leadership declared a week-long country-wide campaign to culminate in big protest demonstrations on 23-24 February, the days of strike.