The resolve of 2022 – Intensify the Battle to Overthrow the Modi-led Fascist Regime! 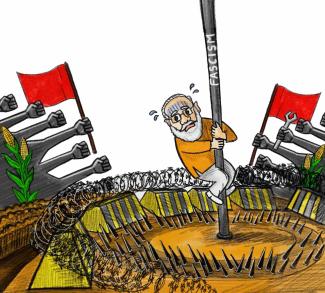 The country witnessed heroic struggles of farmers that is unparallel in the post-independence history of Indian society. The relentless struggle of determination and stubbornness of farmers, backed by the entire working class and democratic sections of the country, forced the Modi led BJP government to beat an unceremonious retreat. Three corporate farm laws, already passed by the Parliament, were forced to be withdrawn by the Modi government. The farmers struggle, in which around 700 farmers lost their lives, was a great victory not only to farmers but also to the struggling people and democracy lovers of the country. In Lakhimpur Kheri, motivated by the arrogant union minister of the BJP, Mr Teni, his son with his convoy mowed down the peacefully protesting farmers where four farmers and a journalist were crushed and killed. He also led an indiscriminate firing on farmers. The sacrifices of farmers did not go in vain. Thousands and thousands of countless false cases are filed against farmers in various states because of their protest.

The country also witnessed an exemplary unity of workers and farmers which was also unparallel in the annals of the history. All central trade unions and the entire working class of the country, including AICCTU (All India Central Council of Trade Unions), barring BMS (Bharatiya Mazdoor Sangh) owing allegiance to the BJP, expressed unequivocal solidarity to struggling farmers and joined several forms of protests on the streets. Lakhs and lakhs of workers and farmers joined the call by farmers organisations and central trade unions. It was heartening to see red and green flags fluttering all over the country all through 2021. The significance of farmers struggle is that it began as a movement against corporates entry into and against corporatisation of agriculture, against three pro-corporate farm laws, in its own due course, turned into a political movement to overthrow the Modi led BJP government.

Working class of the country also left no stones unturned to fight the battle. Various sectors of workers, particularly of government and public sector resorted to strikes after strikes against the Modi government’s onslaught. Various sections of workers were on a war path. Defence workers, Coal workers, steel workers, bank and insurance employees, scheme workers like ASHA, Anganwadi, Mid day Meal, etc., and also various other sections of private corporate establishments and unorganised workers went on strike. The year ended with a massive, successful strike on 16-17 December 2021 by ten lakhs of bank employees against privatisation of banks. The bank employees strike led by United Forum of Bank Unions (UFBU), comprising nine unions, forced the Modi government to defer the tabling of the Bank Privatisation Bill (Banking Laws Amendment Bill 2021) in winter session of the Parliament. Railway workers led by Indian Railway Employees federation (IREF) affiliated to AICCTU led an extensive campaign against corporatisation and privatisation of workshops and dismantling of the Railways.

Ford, Hyundai and various other company workers also went on various forms of protests. We also witnessed ever increasing spontaneous outbursts of un-unionised workers right from Winstron in Karnataka to Foxconn in Chennai. Thousands of young women workers who are not unionised courageously confronted the multinational company Foxconn with determination defying the management’s threats and coercion coupled with police highhandedness that went to an ugly extent of arresting trade union leaders who expressed solidarity and labour journalists who covered the protest. Sanitation workers of some states too resorted to strike demanding higher wages and better service conditions in Bihar, Maharashtra and various other states. The all-India platform of central trade unions also was planning to go on an all-India strike which had to be postponed to 23-24 Feb 2022 because of various reasons including Covid and the ongoing waves and waves of strikes amidst Covid 19. The year 2021 can also be called as year of strikes.

Last year, 2021, witnessed a chain of onslaughts by the Modi led BJP government against the working class of the country. The working class too retaliated and continues to retaliate by building resistance movements as narrated above. Covid devastated the life of the people at large, including workers. Covid second wave hit at its worst. Resulted in loss of earnings, loss of jobs and loss of livelihood that led to increasing poverty and inequality. Sky-rocketing price rise is already eating away meagre earnings and effective earnings have almost halved for each individual worker. Workers were reeling under poverty while Modi converted it into an opportunity for the capitalist class and mounted onslaughts after onslaughts.

The major onslaught was the legislation of new anti-labour Codes that has been going on for some years and subsequent formulation of central and state rules last year to implement it. All BJP ruled states have more or less formulated rules and all set to implement it while most of the non-BJP ruled states too have already initiated the process. While all public sector companies are already put on outright sales, all government owned infrastructure are also being handed over to private corporate and multinational players which is euphemistically called as “National Monetisation Pipeline”. In order to implement privatisation and to crush the resultant protests against it, the government has already formulated a legislation banning strikes (EDSA – Essential Defence Services Act 2021) in defence establishments and extending the same soon to other PSUs also cannot be ruled out.

The government is pushing forward a Coebbelsian lie that new Codes will cover all 50 crore workers including the unorganised and the workers of informal sector. Actually, the government is only acting as an agent for insurance companies and has topsy-turvied the concept of social security. Unorganised and informal sector workers are only offered insurance schemes for which they are to pay out of their pocket. It is not a welfare scheme of the government that offer health insurance and old age pension. The government is shedding its responsibility towards working people of the country and is also protecting the corporates and establishments from the burden of providing health and old age security to its own employees. The government claims that they are the “New Codes for a New India” but actually they are the “New (Manuvadi) Codes for a Corporate India”.