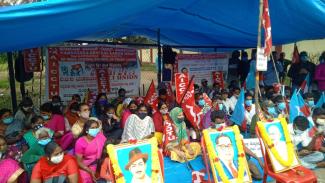 ITI Ltd. is a public sector establishment falling under the Ministry of Communication, Government of India. Workers, who have worked from 3 to 35 years, have been working in the core and perennial work of ITI. Despite such long years of service, they have been termed as “contract workers” and have been deprived of their legitimate rights. They perform the core work of M/s ITI Ltd. and perform the work of engineers, quality assurance, quality test, lab assistance, data processing, finance, driving, office assistance among others. A large number of these workers belong to the dalit community and there are several women workers who have been working for upto 35 years.

ITI has several defence projects, on which these workers perform all the core work including the Advanced Data Processing Research Institute (ADPRI), Defence Communication Network, the Army Static Switched Communication Network - IV (ASCON-IV) with the Indian Army, etc. These workers are involved in the production, testing, research and development, field trials, installation and maintenance of these devices. Scores of the workers have been sent by ITI Ltd. on on-site defence and nation-building assignments to various parts of the country, including India’s borders. The workers were also involved in the production of 3,000 ventilators last year during the first wave of the COVID-19 pandemic and the production of face shields.

The workers working in ITI Ltd., Bengaluru came together and unionized against the unfair labour practices they were being subject to after the first lockdown, when several workers were illegally and arbitrarily stopped, and raised several disputes in regard to their legitimate demands.

On 1 December 2021, 80 workers who were all members of the Union and had raised industrial disputes were illegally and arbitrarily stopped and not permitted to work. This was despite specific advice by the Regional Labour Commissioner that ITI Ltd. was required to comply with Section 33 of the Industrial Disputes Act, 1947, and not change the conditions of service of the workers concerned with the dispute.

The sole reason for refusing employment to workers is the formation of the Union and the workers coming together seeking for their legitimate rights. The actions of the management of the Bengaluru plant of ITI Ltd. is illegal and an unfair labour practice prohibited and punishable under law. By throwing workers to the streets, ITI Ltd. is pushing their families to the streets, including their children.

Despite the fact that they perform core and perennial work, they have been deprived of their statutory rights and permanent status by an act of subterfuge. Indeed contractors have come and gone but these workers have continued in service without any interruption for all these years. These workers have dedicated their lives to ITI Ltd. and have been part of various works in defence for the security of the nation.

Against the illegal and arbitrary action of ITI Ltd., the workers are all sitting in protest outside ITI Ltd. from 1 December 2021. They demand that they be immediately permitted to work and that ITI Ltd. should stop the unfair labour practices it is perpetuating. They have received support from all quarters, including powrakarmikas, sanitation workers, hospital workers, contract workers from other public sectors, and others.

The struggle of these workers is not only the struggle of workers of ITI Ltd. It is reflective of the condition of workers of various public sector enterprises who have despite long years of service continue to be called “contract workers” and deprived of their rights. Various public sector enterprises, including HAL, BHEL and BEML employ large number of workers in this fashion effectively denying them their most basic rights. The public sector, which is supposed to act as a model employer, in fact, acts as a large scale violator of the law. The contract system, which the Supreme Court called nothing but an improved form of bonded labour is practiced and perpetuated. In fact, the recent Occupational Safety, Health and Working Conditions Code perpetuated this highly exploitative system by providing that while contract labour cannot be employed in ‘core activites, the definition of core activities excludes sanitation, watch and ward amongst many others’.

The need of the hour is to take serious action against such shameful practices and to give a strong call for the complete eradication of the baneful contract labour system. νν