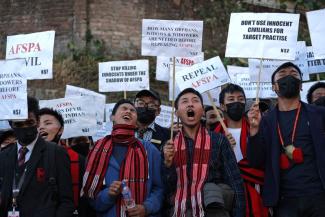 The massacre of coal mine workers by a Special Forces unit of the Army in Oting village of Mon district in Nagaland is a heinous crime, compounded by attempts to cover it up by staging a fake encounter. The attempts by Home Minister Amit Shah and the Army officials to explain it away as a “mistake” cannot convince even the BJP’s own members and allies in the North East.

The armed forces claimed that they ambushed and fired on a truckload of civilians (coal mine workers returning from work), killing six of them on the spot, because they had “credible intelligence” of movement by insurgents. But this excuse is flimsy for more than one reason.

In the first place the killings took place on a busy thoroughfare in broad daylight. In the second place the forces violated protocol by failing to inform and involve the local police forces. Moreover, the armed forces fired without provocation or warning, let alone any attempt to identify the occupants of the truck - and this would be a human rights violation even if the truck in fact carried insurgents.

When local civilians heard of the killings and came to investigate, they say that they found the armed forces in the process of staging an “encounter”. Justifiably enraged, civilians protested at the local army headquarters. Again, the army indulged in indiscriminate firing on civilian protestors, killing seven. The forces then reportedly fled the scene, firing even at residences of coal mine workers on the way. In total, 15 civilians have been killed so far in the ambush and its aftermath. Many others are severely injured.

This incident is no aberration. In the North East states, as well as in Kashmir, Bastar and other conflict areas, civilian killings staged as encounters are common. The Armed Forces Special Powers Act (AFSPA) has its genesis in the Armed Forces Special Powers Ordinance 1942 promulgated by the British to quell the Quit India movement. Shamefully this law with colonial roots has been in effect as an Indian law in the North East since 1958.

The AFSPA provides impunity from prosecution to armed forces on allegations of murder, torture and even rape. This is why, even though the Nagaland police has filed an FIR against the Special Forces in the Oting massacre case, it will be unable to pursue prosecution without sanction from the Central Government - and such sanction is almost never granted. Even in the notorious case where a judicial enquiry found Assam Rifles personnel guilty of the gangrape and murder of Thangjam Manorama in Manipur in 2004, the AFSPA has protected the guilty from prosecution till now.

The people of the North East have long protested against the AFSPA as the chief enabler of military atrocities against civilians. The protest by the women of Manipur at Assam Rifles headquarters where they stripped and held up a banner screaming “Indian Army Rape Us” remains a stinging indictment of the AFSPA. But successive governments of different hues have refused to scrap the AFSPA or hold Army and paramilitary forces accountable for crimes against civilians in the NE, Kashmir, Bastar and elsewhere. Some 1500 cases of fake encounters in Manipur over the last two decades are currently seeking justice in the Supreme Court.

The BJP brands human rights defenders who raise the issue of fake encounters and rapes by armed forces as “anti-nationals” and threatens them with sedition laws. Leading Kashmiri human rights defender Khurram Parvez of the JKCCS has recently been arrested and faces cooked up allegations under the draconian UAPA law. The JKCCS is known for its meticulous documentation and advocacy of human rights in the Kashmir valley, including many massacres covered up to look like “encounters” just like the one just witnessed at Oting.

Now, even the Chief Ministers of Nagaland and Meghalaya - both BJP allies - are demanding the scrapping of AFSPA, while a BJP leader of Mon district is accusing the Army of firing on him and other civilians and attempting to stage a fake encounter.

Further, the trial in the Oting case as well as other allegations of crimes by armed forces must be held in open civilian court. There must be compliance with International humanitarian and human rights law and constitutional standards in all ongoing armed conflicts.

It is high time the country stands up against military solutions and demands for accountability from the forces. The whole country must rise up in protest to give the AFSPA a final push. As we observe 75 years of independence, it is high time that we get rid of the AFSPA which has its genesis in colonial governance, and ensure justice and accountability for every act of custodial violence in conflict areas.