West Bengal: Unite to Demand Reinstatement of All Retrenched Workers in Transport 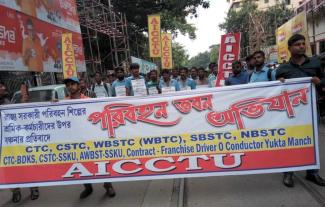 In the last assembly polls in West Bengal, the ruling party had come up with various promises for the transport workers stating that those who have been working as direct contract workers in various transport companies under West Bengal Transport Corporation (CTC, CSTC, WBSTC), NBSTC and SBSTC for a long time will be made permanent. It was also promised that the employees who are working temporarily or through agencies will be made contract workers directly under the company and would gradually be made permanent in the future. They also assured that family members of the deceased workers will be given jobs, duty will be given at the depot near the house, salary/ overtime/ incentive of permanent employees will be increased, workload will be reduced etc.

It's been 8 months since the govt has been elected and none of the promises have been fulfilled. In addition, illegal layoffs are being carried out on various pretexts. WBTC had already started massive layoffs in all its organizations. Over the years, illegal retrenchments on various excuses have been a norm in these transport companies. Even the tripartite agreement (regarding reinstatement of 14 CTC workers) against illegal layoffs of management issued by the state labor department is being violated by the WBTC authority. Hundreds of transport workers are now facing a horrific attack. 89 employees of SBSTC and hundreds of workers from CTC, CSTC and surface transport companies have already been laid off and the number could soon reach upto 400. Despite of thousands of vacancies, workers are being hired on contract, as temporary or agency workers and are being denied equal pay for equal work violating labor laws. Most of the owners of the agencies that have sprung up overnight are either the leaders of the ruling party or the relatives of some bureaucrats. Even the legitimacy of their contracts with the transport companies is questionable and there had been many discrepancies during the appointments. Hundreds of these workers who risked their lives during the Covid pandemic to keep the transport service running are now being thrown out.

Following the path of central government, the state government is also aiming to privatize the transport sector. This approach was first introduced in the state during the Left Front period (through route and bus franchise). Today it has become even more pronounced by contractualization or hiring of workers through agencies. Hundreds of acres of government land in prime areas of the city, bus routes are being sold to private bodies or corporates at minimal cost where massive financial corruption is also involved. Hundreds of crores of rupees gained from leased or sold assets have not been spent for the revival of the transport industry. Reports of massive corruption with the funds of workers' cooperatives have also come up.

Transport workers have a long history of struggle for their rights in West Bengal. 1025 workers, who were kept as ‘casual’ for 15-20 years in Left front period, became permanent through courageous struggle led by AICCTU in 2008-09. United workers movement stopped the humiliation faced by drivers and conductors who were often stripped naked on the highways and in the name of ‘checking’. Twice during the TMC era, the depots were shut down; transport workers marched to Paribahan Bhawan and forced the management to increase the salaries of the employees by Rs. 2,000 and introduce bonus of Rs. 1600 for the agency workers for the first time.

Presently, retrenched and retired workers have been protesting against illegal layoffs and demanding regular pensions. In this situation, all kinds of workers in the transport sector must unite. The conspiratorial plans of the government and the actions of authoritarian, dishonest, corrupt management have brought the state transport industry to the brink of destruction. "I am not being laid off, so why bother?” - this attitude must be rejected by the transport workers. No one will be safe in the future. Therefore, in the interest of transport sector and workers, all the workers and unions of this sector, irrespective of party affiliation, must unite and resist this onslaught. Workers must also be beware of conflicts between unions, factional contradictions and all conspiracies to divide workers, which will ultimately strengthen the hands of anti-labor management.

We all must unanimously demand:

All workers who risked their lives to keep the state's transport sector afloat during the Covid pandemic must not be laid off. The pruning should be withdrawn and all must be taken back to work immediately.

The tripartite agreement against illegal layoffs of management by the State Department of Labor must be implemented and 14 persons must be immediately reinstated and arrears of wages must be paid.

All contract, temporary and agency personnel should be made permanent in the vacant posts.

Millions of rupees deposited in workers' co-operatives should not be embezzled. Workers must be reimbursed immediately.

A family member of the deceased workers must be immediately employed.

Illegal transfers should be stopped immediately. Workers must be posted at the nearest depot.

Employees must be paid a bonus of Rs. 4500 as per government instructions.

Equal pay for equal work must be ensured.

The authoritarian, dishonest and corrupt management should be given exemplary punishment.

The government owned public transport sector must not be privatized.

AICCTU affiliated CTC-BDKS, CSTC-SSKU, WBSTC-SSKU unions have strongly protested against the government's privatization plan and illegal layoffs by the authorities. Leafleting and postering have started at the depots to spread the campaign and build a larger movement in the coming days. The AICCTU believes that a united movement of workers and unions is the only way to save the state's transport sector and resist attacks on workers.