Condemn the police killing of 5 power plant workers in Bangladesh 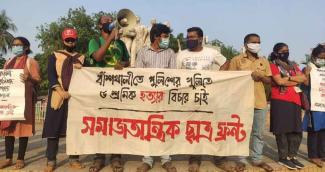 On April 17, 2021, five workers were killed and more than 50 injured when police in Banshkhali, southeast of Bangladesh opened fire on a protest by thousands of contract workers of a coal-based power plant. The workers were holding a protest demanding payment of unpaid wages, better working condition and reduced work hours during the month of Ramzan.

The under-construction 1,320-megawatt power plant, a joint project between S Alam group and China’s SEPCOIII Electric Power Construction was announced in 2016. According to environmental groups and local people, the power plant was built without public consultation and does not comply to environmental impact standards.

Despite the protests from local population demanding proper public consultation, the Bangladeshi government allowed the construction of power plant to go ahead. In 2016, police opened fire at protest by locals against the acquiring the land for the power plant project. Four villagers were killed in this police firing.

The Left Democratic Alliance (LDA) and trade union groups protesting against the police killing demanded a proper investigation into the incident, arrest of those responsible for the killings. The organizations also demanded financial compensation equal to lifetime income to the families of the victims, and free and proper treatment for those who are injured.

The working class of Bangladesh continue to suffer under the impact of government’s neoliberal offensive. Low and unpaid wages, poor working conditions, union busting and discrimination are rampant despite assurance of improvement by the government after the Rana Plaza clothing factory collapse in 2013. More than 1,000 workers were killed when eight story building housing various garment manufacturing units collapsed. Just prior to the Rana Plaza disaster, the Tazreen Fashions factory fire resulted in the deaths of over 100 workers.

The use of state violence against union activities and workers protests have long been a tool for Bangladeshi government to suppress the demands of the working class. Last year, during the beginning of the COVID-19 pandemic, thousands of garment workers across the country came to streets demanding the payment of unpaid wages. The government refused to hear their demand and instead unleashed police violence against the workers in an attempt to break the protest. A much larger protest in January 2019 by garment workers demanding wage hike faced similar response from the state. Protesters were assaulted, arrested and haunted by state authorities, while the industries dismissed more 7000 workers from their jobs for demanding their rights.